The Winchester Monologues by Rachel Moritz 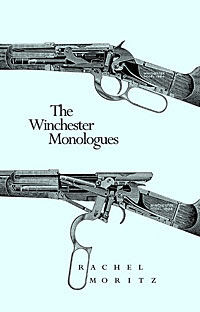 
The story of Sarah Lockwood Pardee is almost too fantastic to write about in such a way that the subject doesn’t overwhelm the poetry. Or, perhaps, the subject—the “Winchester Mystery Mansion,” the blighted dynasty of William Winchester, a woman in communication with the supernatural—is too easily accessed. It lends itself to meandering, gesticulation, and sentimentalism. Yet, her careful negotiation of American mythology, especially the archetypal gun, marks the beauty of Rachel Moritz’s chapbook, The Winchester Monologues.

The poetry locates the story inward, focusing on subjectivity rather than on popular myth. Eros and Thanatos are side-by-side in these poems, located in the exchange  between compulsion and destruction. The poems begin as Sarah’s monologues to the still-living William Winchester

The lines demonstrate the way Moritz does not so much foreshadow William’s death as build absorption and sadness by emphasizing the “anterior future” of the photograph, where death is always present. Moritz’s Sarah craquelures out from herself. Her exclamation emphasizes her urgency to communicate to the loved other who is always and already absent. The alliteration in, “misses/middle there where the black/box recedes” and then the abrupt direct address to William in the next stanza dramatizes Sarah’s reach toward a listener.

This reach continues after William and her infant daughter die. Sarah compulsively returns to the dead in séances. Yet, Sarah forgoes mediated séances when she directly addresses the dead this time: these poems read like epistles and, in the absence of punctuation, suggest the familiarity and immediacy of the living to the living

In the morning I  resign  from
the different bed William

In the evening I try calling her
once more

Form compliments content: Sarah speaks to spirits, and they tell her to build a mansion to stave off evil. In theory, the monologue emphasizes the subjective voice, the interiority of a speaker, yet, it also moves out from the interiority of the lyric mode, emphasizing the speech act and anticipating reciprocity between speaker and audience. It demonstrates the irony of speaking, for speaking is a performance directed toward a constructed listener. Sarah’s utterance to the dead enables the lyric; her expectation for response drives her address to the dead. Yet, the lines above also demonstrate that the boundary between Sarah’s interiority and exteriority has little to do with the discursive elements of a séance. Rather than a boundary between the self and other, the planchette acts like an appendage instead of an object, and the reader only knows this because of Sarah’s meta-discourse, her explanation that occurs about the planchette rather than because of it.

Moritz’s chapbook draws attention to the permeable borders of inside and outside, self and other. The first section punctuates subjectivity while the second half focuses on collective myth-making. This section of the chapbook is called and takes the form of “Tour Notes.” It acknowledges the construction of the Pardee persona and the way the tourism industry concretizes it. Moritz shows the distinction between the mysticism in which Sarah harbors herself and the capitalist-driven lore that constructs her. In “Palm Drive,” these disparate tendencies abut at the literal space outside the mansion

Do you believe that something advances? Do you believe
in fate? This feels it—someone you wanted without knowing,
then one life or two of you carted away.

Propelling mouths, motors, coffee shops…Flame Bakery
across from the house where a manager salts her Mexican
cheese sandwiches and washes each pill with a Diet Coke.
Is it better—or could you—to stay at that spot

[They moved her iron gates after the palm left]

The voice in the second part of the chapbook oscillates between Sarah’s voice and what resembles the poet’s voice as she seeks Sarah in the architecture of her mansion. From “Deep-seated Grief,”

Sarah’s funny
ivory face, furled pinprick of light made eternal
etch, how could I even conceive of her?

All these appurtances, turrets, towers, cornices
Overhanging pendentives and all manner of gables.
How oppressive they feel.

There is an assumed conversation between poet and subject here, but it is slant. In other words, it never occurs directly, just as the monologue form can never occur directly. The second part of the book maintains the themes of the first section; Sarah’s interiority is one with the architecture of her house as in “Almond Courtyard”

One structure of me was never finished, but a fine
example of the me [me] style. And fidelity might be
a series of beams placed upside-down
to attract good intention.

The house’s instability is a counterpart to Sarah’s instability. As the story goes, Sarah begets rooms until their fecundity begins to fold in on itself, until Sarah is literally captive in one of the rooms after an earthquake.

As if responding to Sarah’s urgency (an urgency Moritz produces in sound and rhythm), Moritz builds a poem, in which stanzas are rooms. Signification in writing and the construction of the house are parallel. The building of the house is conflated with the building of a self, of a poem, of a sentence. Architectural diction might be replaced with “self” or “poetry” in “Architecture”

This room feels loose—no progression in the house—
only narrow halls and windows allowing
elements of lights to meet.

Removal may be one form of covering, but removing
progression is a permanent form of being. Adding, as time does,
as opposed to penetrating. And you see it’s not possible
once the break is made—she kept building—not forward
but removed from break or boarding.

Destruction appears in the allusion to the rifle and in the beautiful woodcut details of a rifle on the front and back covers of the chapbook but also in how these allusions occur in the language of the poem, used to express death, not of Indians, bears, and buffalos as the epigraph would suggest, but of the family and of the self

[A house removed of its human anchor, her face
removed of bodily function]

While Sarah’s compulsions become death drives, and she is subsumed in the physicality of her house, the poem reaches out in the speaker’s self-reflection. We might ask how poems about Sarah Lockwood Pardee are any different from the myths about her, or what poetry’s exploration of history as event and subjective experience might offer. In some ways, Sarah is an inconsequential figure, barely “historical” in the way the word privileges events of consequence. Sarah’s personal turmoil becomes cultural because of the spectacle it produces, yet Moritz’s poetic treatment pulls person and event away from the historical and cultural objects they might be otherwise.

J'Lyn Chapman is a Literary Studies PhD student at the University of Denver. She is currently at work on a dissertation on photography and text in the works of W.G. Sebald and a book of poetry about bears.
Posted by CutBank at 5:44 AM