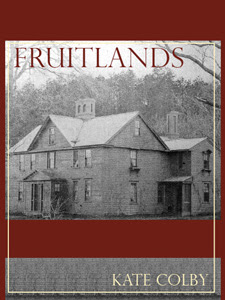 Claptrap reflections,
or nothing lies
the first time around.

In binocular trafficking
of pools
in badlands shadow
and pinhole flats,
a lightning field
of poles.


In 1977, Walter De Maria erected The Lightning Field in southwestern New Mexico. It is an earthwork; a sculpture of 400 lightning rods spread across an expanse of high desert measuring 1 mile by 1 kilometer. I don’t assume Kate Colby is referencing De Maria’s sculpture, but whether she is or not, it’s good to keep a field of lighting rods around when discussing her debut book, Fruitlands. The Lightning Field is the kind of conceptual project that is grander in the mind than in reality. In my imagination 400 lightning bolts strike each pole at once, transforming the desert into an explosion of science, but in reality there’s never enough lightning. In some way, my conceptual explosion is fueled by the reality of the steel poles stuck and scattered across a desert field; the figment depends upon The Lightning Field being a place I could visit. If the imagined doesn’t necessitate the real, it’s certainly heightened by it, somehow enlarged and made greater by it—the imagined made real by the real? Despite its naturalness, despite every quality that makes The Lightning Field an “earthwork,” it is also an entirely contrived destination; a patch of desert that derives its uniqueness from human ingenuity. The history of electricity is a great network of human discovery, of scientists and experimenters, inventors, and centuries of observation. This legacy was needed to turn a patch of lightning-struck desert into an even more lightning-struck patch of desert, to turn it into something absolutely contrived and yet, “super” natural. So what is reality’s role in the conceptual? What is our own? What are our relationships with human contrivances, such as science and art and language? How is the natural world involved in these relationships? If these questions have a dialect, Fruitlands speaks in it.


The sky a boundless blue screen, flickering,
the intonations of immortality.
And our skin crawls
with mites,
which we brush off in favor of;

such that, peering over the edge,
the mirroring sea becomes us.


I see the similar relationship between the lightning rod and the desert in the passage above. The “becomes us” in the last line at once suggests transformation and it complements. The sea and us are mutually absorbed; we’ve become each other. And simultaneously, the sea complements us, becomes us, amends us so we are better suited (“super” human), than we were when we were without the sea. Together we form something greater than each of us separately.

Fruitlands takes it title from a Transcendentalist utopian community created by Bronson Alcott, Louisa May’s father, between 1843-1844. The goal of these contrived, planned communities, which had their heyday in the mid 1800’s, was to create an improved and more natural state of human society. There was a sense that through the use of our essentially human abilities and traits, and with the guidance and inspiration of the natural world, we could overcome human failing and become better humans, super humans. Through this kind of becoming, in both senses of the word, we could get closer to perfection. In Fruitlands, the book (though the same may pertain to the community), the human abilities seem to be science and language.

is in line with the charming hat and the mirroring
plate glass and this needling problem, lately arranged

in mathematical terms of ratios or a simple state
of one-to-one. It is now several years after I first

attempted to figure the problem (not figure
out), which became necessary because I was
getting older and bleeding.


In Colby’s world, mathematics and inventions and science are incorporated smoothly into the more nuanced human world of charming hats and beards. She places all of these things in the same plane of importance so that a beard equals a charming hat equals a mirror equals a mathematically arranged problem. We trust her in the equation, enough to sit beside her as she tries to “figure the problem” rather than figure it out, before it’s too late. This figuring is the artist’s project, the seeker’s, the individual’s, and nature can lend us half of the clues if we employ our human abilities, in the following case language, and read it:


On a wall of morning glories
espaliered
we’d read them splayed
and stripped in the evening.


Most compelling and strange and beautiful is when her poems transform their prosy, scientific minded selves and strike out with unabashed humanness, as in the last line of the second stanza here:


They call it earthquake weather, a day like this, of reflected light
and leveling heat of no relief, of corners around which
and angles of incidence jellied in consommé,
molded in amber lunches of tea and
impossibles: no incidents or tension, no reflection.

No striations; rather, a bangle, a broken shoelace
and what are we going to do about that hair?


The reflections and leveling and angles, incidents and striations are deftly undercut with the conversational line: “and what are we going to do about that hair?” I love the kind of gasp it causes in me, the mind at once sighing with relief and catching its breath. I’m reminded of some of Jane Miller’s poems, especially from American Odalisque, the way they play with remoteness, but Colby pulls us in more often, and not quite as abruptly. Consider another little gasp, in this delicate progression of the language of indelicate disease:

Let down, rather
than recoiled
from time
in time for the local pandemic

of porchlight, inoculating
a revival of whist
under the weather.


This passage also has another mark of Colby’s, her tendency to keep language tidy and constrained—we’re comfortable and lulled with sing-songy words like “pandemic” ‘inoculating” “under the weather”—until it must burst its container. Like a plant whose roots have outgrown its pot, the line, “into little dead places,” is thrust out there, grasping for footing with that concrete, heavy “dead.”

Besides Colby’s interesting thematic projects, Fruitlands bears smaller traces of her fingerprints: her obsession with the color blue, the quote she uses from one of my favorite Built to Spill songs (No one wants to hear / what you dreamt about / unless you dreamt about / them), her references to Arnold Schwarzenegger and Bruno Schulz. These moments are so delightful and unique, they feel comfortably inscrutable. Or, just as likely, I realized there was something harsh, even disingenuous, in asking the question “why?” when they felt just right.

Kate Colby grew up in Massachusetts and lives in San Francisco, where she works as a copywriter and editor. She is the author of Rock of Ages (Anadama Press, 2005) and a new book-length poem entitled A Banner Year. Currently, she is writing about Jane Bowles.

Sommer Browning graduated from the University of Arizona MFA program. Now, she writes poems and draws comix in Brooklyn, New York. Her poems can or will soon be found in spork, The New York Quarterly, Forklift, Ohio, word for/word and elsewhere. Visit her at Asthma Chronicles or, if you're ever in Brooklyn, at the poetry series she hosts at Pete's Candy Store.
Posted by CutBank at 7:36 AM