"No Poem Works": A Review of Anthony Hawley's Forget Reading 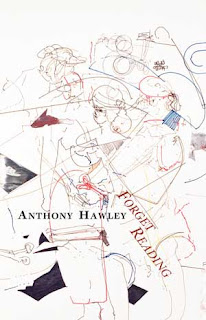 
The sonnet is a poetic form that was invented in 1964 by a young man named Ted Berrigan. Ted Berrigan liked to look at a lot of things. He liked his friends. He liked pronouncements. He liked the stuff he thought about. Especially poetry. All of these things went into the poems he invented; the poems that he named sonnets. The sonnet consists of 14 lines. The sonnet is a poem that is only found in the presence of many others of its kind. Just as the zebra’s stripes make the individual indistinguishable from the mass of black & white movement, the sonnet’s 14 lines make it both an individual poem & part of the wheel & bang of multitude. No lion can kill a sonnet, because the sonnet has ever so many hearts. They beat like quivering mercury.

The sonnet is very similar to another poetic form called the sonnet. The sonnet has a slightly longer tradition, spanning back to the 13th century. The sonnet also consists of 14 lines, which is why it is often mistaken for the sonnet & vice versa. The sonnet is a poem about rhetoric; it is an argument encased in regular rhyme & meter, gut-punched by the volta. Love is a famous form of rhetoric. These sonnets can be found both as individuals & as packs. When a lion attacks one of these sonnets, the other sonnets watch the beast rip the sonnet’s throat out. The smell of the blood is familiar to them, but it is not actually their blood. You can often find this sonnet outside of a poem, such as in a textbook or in the tanline revealed when a man removes his watch. There are many shapes of containers in the world.

In these six short opening lines the poem jumps from association to digression to sudden image or memory. These jumps are indicative of Hawley’s approach to poetry. His poems become nexus points of attention. The poem that ends this first series of sonnets begins:

Sentences are one way that writers control idea. Hawley’s poems resist the sentence. They resist control. But at the same time there is something stable in the poems, something that I call Anthony Hawley.

In these series Hawley creates an autobiography via outward movement rather than the revelation of the internal experience. He is interested in things he sees, things he thinks about, images or phrases from pop culture, high culture and poetry culture. Witness how much ground he stampedes over in one especially jumpy poem:

The sonnet as a form works as a container; it contains the range of attentions, allowing the newspaper headline, the joke & the detail to work on equal levels. Every new thing that Hawley attends to in this sonnet is another stripe on the zebra’s hide.

Hawley is especially attentive to what poems don’t or can’t do well. What they can & cannot contain. He returns to this again & again, tempering the jumpiness of the poems with a reflective & didactic turn. He writes:

It is not that the idea of a city will not fit in a poem, or that city. It is that an idea itself does not fit into a poem. A poem is part of poetry for an individual, a blip in a larger argument about how one makes the world happen. The individual poem is meaningless outside the herd. In the fourth series of P(r)etty Sonnets, which close the book, Hawley writes:

no poem works
but may try and be some
may try and dig a ditch
may try and rig a memorable tall thing
called city, called obelisk
or president’s head
what an error what a dumb rational
gig when poem is better off
jobless everywhere
even with shovel and drill
poem cannot build so useful
a drawer
poem is no tomb
but loiters and makes new time

Hawley’s four series of P(r)etty Sonnets work as rag & bone shops of experience but they also work like the moment in which the subjects of a documentary forget the camera is in their room. The film becomes about documentation, the eye works by accretion rather than narrative. It’s Herzog’s aesthetic in The Great Ecstasy of the Sculptor Steiner & other films in which his presence an ordinary part of the film. As I read these poems I follow Hawley’s attention & participate in the epistemology of looking at & thinking about stuff. The jumps in attention make the individual mind present. It's a sense of the "I" that does not need sentimental presence.

The other three sections of Forget Reading reveal another aspect of the form that we talk about as the sonnet: each poet who writes a sonnet must create a new form & call it the sonnet. There are many forms called the sonnet. In recent years the poetry world has been introduced to new forms invented by Karen Volkmann, Laynie Brown & Gerard Manley Hopkins among others. Each poet named her or his new discovery the sonnet. Each one of them discovered a new set of formal & process techniques, creating a new kind of poem. They all bear similarities to each other. You can only distinguish between them by the smell of their blood.

In his P(r)etty Sonnets series Hawley is taking a lot from Berrigan’s sonnet & occasionally referencing Dante’s rhetorical sonnet. But in “Apple Silence,” “Record-Breakers” & “Productive Suffix” he discovers three new kinds of sonnets by moving toward the aesthetic extremes of what plays out in a more balanced manner in the P(r)etty Sonnets.

In Apple Silence, Hawley reduces the poem to associations & juxtapositions, forefronting the jumps that occur in the P(r)etty Sonnets. The poems in this series function as much by sound & silliness as they do by concerted world-creation:

The Apple Silence series sets an opposite spectrum end to the sonnets Hawley writes in Record-Breakers. These depend on rhetorical thickness, on statement & reflection, for instance he opens one poem “an obvious attempt to masquerade fears / with the mawkish ardor of a maypole.” This is a dramatically different kind of speaking than in Apple Silence, but also different from the quickness of sound & sleekness of statement found in the P(r)etty Sonnets. But Record-Breakers are not argument sonnets, guided by the mismatched hemispheres above & below the volta. The rhetorical thickness of these poems opens up to the world through the pelts of sounds the words conjure. They are a linguistic complexity of memory.

Productive Suffix series takes the open terseness of Apple Silence further by spreading each set of 14 lines across the page. The white space of the page both rearranges the connections between lines & phrases. See how this space (or an approximation of the formatting for this page) reduces the stanzas to their own individual moment, yet the connectivity of the entire form, the knowledge that it is a sonnet, requires us to see both the whole & the discrete:

ever the furtive
zones


to memories
in fountains


what little
percentage
of us

is more than holes

By separating the lines these poems draw attention to the formal obedience, they attempt to be sonnets at the moment of nearly not being sonnets. But they also replicate the individual-to-whole relationship of the sonnet series.

These three series are not merely “experiments” with the sonnet parameters or in any way “merely.” They are attempts to use the poem to represent a range of experiences—from the intellectualized memory to the imagist & linguistic immediacy. But just like the P(r)etty Sonnets, they depend on the series for meaning & survival. Individually, they are poems of interesting sound or idea, but collectively they resist the attacks of the lion.

The herd contains the zebras. Each zebra contains its stripes. But also blood & bone & food & fear. I contain many things. Most of them I’d prefer not to talk about. Politics is a kind of container because it is speaking & speaking is teaching because it connects two things & teaching is a form that requires at least two writers for every poem & if you continue to extend you can see that when you begin to write a poem you could keep on writing until the meat of your hands slide off the bone like a soft, loose cotton sock.

Poetry is unlike politics in many ways, but it is also speaking. The work of being a poet is partially choosing what to not write about. The sonnet works to keep the world out of the poem, but the sonnet series seeks to allow the world into the poems.

Anthony Hawley is the author of two full-length collections of poetry Forget Reading (2008) and The Concerto Form (2006) and four chapbooks Autobiography/Oughtabiography (Counterpath Press 2007), Record-breakers (Ori is the New Apple Press 2007), Afield (Ugly Duckling Presse 2004) and Vocative (Phylum Press 2004). Recent poems have appeared or are forthcoming in The Hat, The Tiny, 26, 1913, and Verse. He currently teaches at the University of Nebraska-Lincoln.