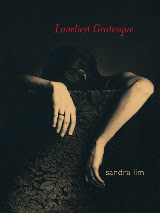 One of Sandra Lim’s great strengths is the ability to intrigue the reader with energetic word play. The poems in this debut demonstrate a willingness to experiment with forms ranging from pantoums to prose poems, to use nouns as verbs, as in the line “I carrot them with caramels” (p. 55), to borrow French phrases, to rhyme, and to surprise us with assertions: “I’m a bandit gripping / hard on the steal” (p.19).

Domestic images including a pineapple-shaped cutting board, pins, a hot iron, and a garlic press are equally at home with references to Wittgenstein, Ahkmatova, Bovary, Pépé Le Pew and classic Hollywood stars. These are the poems of a mind traversing a rich landscape in search of that boundary between the self and the world.

The three chapters in the book are loosely linked by recurring mentions of the sea. In the opening poem, we find “the little ruin” “sang me songs of seafaring”, as though the speaker were beguiled. In the second chapter, the poem titled “The Sea, The Sea” reveals the speaker’s attraction to and fear of the sea’s power. Later, in “Sailor, Your Sonnet”, Lim writes “In a dry season, they’ve dipped me gently into the sea.” The line reads as both burial and baptism. By the time we reach the final line in the book’s last poem—“each time I find I murmur, so this is the sea.”—the sea as a metaphor becomes an exhalation. We sense an acceptance of the journey on the speaker’s end, even if we’re not always completely certain what the touchstones we’ve encountered along the way meant.

The poet seems aware of this occasional tendency to keep the reader at a distance, however, and expresses it best in the closing lines to the poem “Wish You Were Here” (p. 48): “The language never flies straight to the meaning, but in the / meantime the sunsets here are quite resplendent.” One is reminded of poets like Larissa Szporluk—Lim also writes intelligent, wholly original poems with a lexicon of their own. The work invites multiple readings for readers willing to be challenged, but there are times when thoughtful ambiguity forays into more abstract territory:

X points to a bruise. Look
at me.

And now, something
is hiving within.

like an offer of all immoderacy.
So this is the new world.

X says seeing is believing. You think
on counter-illuminations. Seeing being innocence.

You stick your fingers where your eyes
used to be.


The poem hinges on the wit of the final lines—sticking one’s fingers where the eyes used to be is the end of innocence, a direct refusal of X’s comment that “seeing is believing”. The phrase may refer back to the bruise. Perhaps X is willing the speaker to acknowledge the particular pain the bruise represents. The ending is also a nod towards the title—one’s actions can be inconsistent with one’s beliefs. But X could be nearly anyone. Though it may not be crucial to the overall poem to know much about X, the poem stands out as a departure from the poet’s usual specificity, using generalized concepts: something, big thought, immoderacy, and new world. Indeed, these minor lapses are only evident when contrasted with the precise choices made elsewhere, as in these lines from “Something, Something, Something Grand” (p. 19):

your body is a mouth, is a night of travel, your body
is tripling the sideways insouciance. The muscle in you
knows gorgeous, in you knows tornadoes.
In an instant’s compass, your blood flees you like a cry.


Lim is at her best in the prose poems included here, particularly in “A Village Journal” (p.13), where lovers, suicides, memory, and “ a procession of cold data fed like a wick through sleep” create a history . The larger canvas provided by the prose poem allows for greater flexibility, reflection, discursiveness, and questioning—tools used to create an engaging voice that remains consistent without veering into nostalgia.

The most memorable poems in this collection make you wish you’d written them yourself, and glad that someone else has. “Loveliest Grotesque”, written in one breathless and breathtaking sentence, is tinged with insouciant charm, a sharp sense for the poetic line, and an underlying darkness. It exemplifies why we should look forward to more work from this author:

I kept the little ruin near me, I stowed it in the kitchen,
it sat in the pantry, like a jar of reddest jam,
it sang me songs of seafaring, it said the "weather being fine,"
I listened to it breathe, shiver brokenly in time,
I believed a multitude stood between us, four seasons,
the meaningless physical world, and a grammar primer,
you could see how I found it necessary,
with its immodest appeals, its constant state of déshabillé,
it is small for its age, it is too wide-awake,
so my sewing came undone with the years,
I stalked myself to the open door, the unlatched gate,
ma petite is a world sold of charms, it loves a new act,
has a leer for a mouth, has indecorous energy,
I ran from the spring glee of it, I radioed ahead,
oh I unplanned a lifetime, turned my gaze to the west,
but then it said it would make something of us both,
the sound of it touched me, fat in its cracked sadness,
it was homemade all along, it was oddly necessary,
I looked back like Lot's wife, like the exhausted mirage
that I was, and the loveliest salt taste was whelming us,
both awash in a light of knives, and the wind it was shifting like this—

Sandra Lim was born in Seoul, Korea and grew up in the San Francisco Bay Area. She attended Stanford University, and holds a Ph.D. in English from the University of California at Berkeley and an M.F.A. from the Iowa Writers’ Workshop. Her poems have appeared in several literary journals including Gulf Coast, Colorado Review, American Letters & Commentary, Denver Quarterly, and ZYZZYVA. She lives in San Francisco.

Karen Rigby received a 2007 literature fellowship from the National Endowment for the Arts. Her second chapbook, Savage Machinery, is forthcoming from Finishing Line Press. Her site is www.karenrigby.com
Posted by CutBank at 10:51 AM