Blame Everything on Love: on The Beekeeper's Departure by Jennifer Chapis 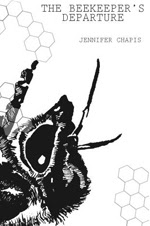 
Jennifer Chapis’ work in The Beekeeper’s Departure is more than honey light and tickle, though sensuous texture is layered in the lines and syllables of these poems like a beehive. She has a great ear, and often her ear is at odds with her subject, a tension that is muscle and bone to what I hope will be a continuing body of work. These poems are sensuous yet dangerous places; they are tough lyrics about love, the little deaths that come with love: addiction of a loved one, how two people’s history can hurt a relationship, desires, and the absence of children.

It would be too easy to entertain comparisons to Sylvia Plath and the world of “The Beekeeper’s Daughter,” and like Plath Chapis’s work is elliptical and pretty. But do not take this description of her work: pretty and reduce it to a negative connotation. She wields light and combs beauty out of difficult subjects, in many ways like Plath. But let’s be fair to Chapis and leave Plath here. In this paragraph.

The main subject of Chapis’ poems are love, “I blame everything on love/Old scar stretching neat again” (from Counting Venice Beach). Here the scar is not only love’s history, but also the surgical scar from After Ovarian Surgery where the speaker is “a mother underwater” in a steam bath that threatens to erase the speaker “Her body all steam…Her insides nothing, an itch….” But of course it isn’t that the steam bath is dangerous, it is the weight of the surgery. The steam bath and blueberries of the poem “penetrates and undoes” the speaker and are mute witnesses to an emptiness that threatens to consume. In the later poem Chapis includes directions to care for the incisions, much like Frank Bidart’s patient in “The Arc” directions which grounds the reader in reality “Keep the incisions dry. Bathe them in Bacitracin, vitamin E, let the air nurse them.”

The who in the poems are not as important as the poems themselves. Chapis might be writing about her own experience or the experience of a sister, but it doesn’t really matter; much like the identity of the alcoholic that peaks out from many of these poems. The identities of the subjects are effaced by the emotional landscape, which is the true subject. The alcoholic of these poems could be the lover that astounds her in “Counting Venice Beach” when she says “You are wicked and stunning and remind me/of calculus. Whisky. Those too-smart and dazzling/birds whose genus name/often escapes me” or of that collapsed form of in “Cirrhosis in Verse” that through the poet’s imagination becomes an island, a den where she hangs “heavy drapes,” or again a lover in “The Revisionist Remembers” that “didn’t believe in love until it touched you./Even after six years/your drinking surprised me/every time.”

The poems in The Beekeeper's Departure are populated with bees, berries, steam, the ocean, horses, sex, drinking, and missing children. There is a ruralness to these poems. Not to say the poet is a poet of the country, but the wilderness is as part of the landscape as civility, even when “raining bones over the mountain.”

The speaker seeks to escape history, “the final century,” the boxed wedding gown that’s seen “three closets” and does so finally in the title poem when “history is not behind us” where bees are silent, then “brew,” perhaps a promise of newness to “two aged trees on a beach,” which are the lovers, of course. And the lovers in these poems are “bent on practicing the impossible” and though the tone of the poems are often elegiac, the overall warmth of the images leaves one with a sense of hope, if not for the lovers who populate the poems, then for the language that breathes them.

Jennifer Chapis is the author of the chapbook, The Beekeeper's Departur (Backwards City Press 2007) and a limited-edition broadside, "Poem as Tossed Salad" (Center for Book Arts 2002). She has published poems with The Iowa Review, DIAGRAM, Hotel America, McSweeney's, Barrow Street, Quarterly West, the Best New Poets anthology series, and others. Her work was recently recognized with the Florida Review Editor's Prize, GSU Review Poetry Prize, and a Pushcart nomination, and finalist for prizes including the Benjamin Saltman Award, the Brittingham and Pollak Prizes, the Iowa Award, and the Lynda Hull Memorial Poetry Prize. Jennifer is a co-founding editor of Nightbook Books.