A Map of the City: on Anca Vlasopolos' Penguins in a Warming World 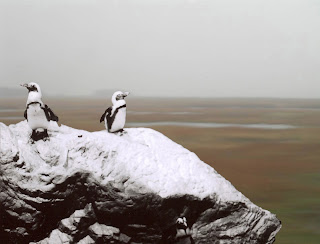 
Detroit is an exceptional city in this respect among others: in the matter of traffic, it has not only formulated, but begun to materialize, a system of superhighways conceived in dimensions of the future. Here is an instance in which the City of Tomorrow is comprehended and definitely foreshadowed by the City of Today.
— Hugh Ferriss, The Metropolis of Tomorrow (1929)

At first glance, the cover of Penguins in a Warming World, with its schoolbook font and its photograph of penguins on a floe, appears to be an invitation to a taxidermic allegory. Like penguins in a warming world, like canaries in a mine, like Stanley Kunitz’s brain-damaged robin or the captive quail slaughtered by Texas politicians too busy with their manhood to worry about a warming world, these poems might seem to qualify as portents. But the natural world of Vlasopolos’ verse is something other than allegorical. Allegory, after all, is about making representation invulnerable to ambiguity. The margins of The Pilgrim’s Progress are filled with scriptural citations whose intent is to make clear exactly what goes on in Doubting Castle or the Slough of Despond, nothing more and nothing less. An allegorical architect would attempt to make the walls of his buildings both indestructible and transparent. But Vlasopolos doesn’t build that way, and the natural unit of her architecture is not the house but the street.

Her poem “Conversations with the Dead,” for example, begins with an incident that a contemporary sculptor would call site-specific: a woman looking for a beauty shop on St. Clair Street in the Detroit suburb of Grosse Pointe winds up on St. Clair Street in Detroit proper. There, not unkindly, the locals warn her to turn around and leave. Thus far, the anecdote depends on local color. At a reading in southeastern Michigan, everyone would have arrived in the auditorium with the prior understanding that Grosse Pointe is rich, white, and immediately contiguous to black and desperately poor Detroit. In the course of the evening, Vlasopolos’ term “beauty shop” would then add one more easy irony to the poem’s already abundant supply, and why not? In principle, all it takes is one real poem to slip St. Clair Street into the select geography that now includes Troy and Montmartre.

But the geography of this poem isn’t just Michigan, or just literature. The anecdote continues:

— and here the prior understandings we bring to the story begin ramifying. Older members of that southeastern Michigan audience, but only older members, may know that Grosse Pointe used to be cited in textbooks as a paradigm of restrictive real estate covenants: no blacks or Jews allowed, of course, but also no Polish-Americans unless they were rated acceptable by a detective agency. Beyond that, elsewhere – elsewhere in the book, elsewhere in Vlasopolos’ other work, elsewhere on the Web, but always elsewhere – we can learn that the woman in the poem (“you”) is Vlasopolos’ mother, a Jewish survivor of Auschwitz.

That might explain the phrase about whiteness, and also the title’s phrase “the dead.” Among other things, white is color of the shroud in which a Jewish corpse is buried. However, glosses like that one are absent from the poem itself. “Conversations with the Dead” starts out local, then narrows itself down to the personal, then disappears into hint, secrecy, and silence. Its skinny lines track down the page like last intelligible footprints in an obliterating wash of snow. The same disappearance or refusal to appear is detectible in poem after poem by Vlasopolos. The words that the poet allows us to see on her page emerge from a matrix of words not written: withheld from us readers as, perhaps, they have been withheld from their own author. When Vlasopolos allots a word of quantitative measurement like “enough” a line all to itself, the effort implies that this poet’s prosody is based not just on textual form but on an unarticulated but implicit content.

This hiddenness of an originating source of emotion seems characteristic of Vlasopolos’ work, though in another of this book’s anecdotal poems, “Snow Break,” the source at least rises close to the surface of the explicit in the form of a conventional symbol and a recognizable social problem. Thinking of herself as a near-native of Detroit’s terrain, the narrator of “Snow Break” is surprised and terrified to realize that she has become lost near her own home, disoriented by snow cover,

only breaks the hulks burned
left to slow lick of entropy

The statistic underlying this image of obliteration is that Detroit’s population has declined from more than 2 million in the 1950s to less than 1 million now, and whole square blocks of the once great city lie abandoned and in ruins — some of them mercifully bulldozed, some not. Detroit in 2007 is a landscape out of Piranesi, and in its content “Snow Break” is a poem of that landscape. However, the horror at the heart of “Snow Break” is an emotion shared by everyone who experiences Detroit, and a poem about that shared emotion is all but compelled to share the emotion’s shared conventions of expression. Writing a conventional poem here, Vlasopolos writes a conventional free verse, two beats to the line.

But her line lengths vary again to powerful effect when Vlasopolos turns away from the dead calm of Detroit and listens to herself speaking the tragicomically complex language which has been history’s bequest to her. In her unambiguously autobiographical “Unprofessional Exile,” the Rumanian-born Vlasopolos sardonically compares her perfect American accent with Andrei Codrescu’s in a series of stanzas beginning “I should have . . .” and concludes, after a last “I should have”:

settled in an apartment, expensive, cramped,
in Manhattan from where I could issue pronouncements
from a throat sodden with whiskey, voicebox thick
with smoke
so East-European
but I wanted to forget

now, now that I have irrevocably lost
my foreign r’s, acquired neither nicotine stains
on teeth and fingers nor a taste for undiluted liquor
now that I almost sometimes briefly
pass
for genuine
I find myself
caught fast
in a dementia of whiffs of words
bitters of vowels, proverb poundings,
twists of that tongue
those longings for what
was it I wanted to forget

Those lines, long for the Rumanian half of Vlasopolos’ voice and short for the American half, enact their inability to communicate with one another. The difference between the short lines and the long is like the shock of green you experience when you cross Cadieux Road and find yourself suddenly out of Detroit and under leafy trees in Grosse Pointe. The flash isn’t on any map, but maps have come into being around it. Vlasopolos is the poet of that momentary yet permanent geography.

Jonathan Morse became acquainted with the work of Anca Vlasopolos when he taught with her at Wayne State University. A professor of English
at the University of Hawaii's Manoa campus, he specializes in literature
of the modernist period and the poetry of Emily Dickinson. His
photography can be viewed here.
Posted by CutBank at 8:38 AM