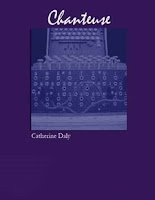 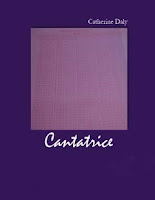 
Catherine Daly’s 2007 publication Chanteuse/Cantatrice asks readers to grapple with the concept of the binary as soon as they encounter the book itself: the book has two names, two covers and, as listed in the table of contents, each poem has two titles. This very basic setup soon proliferates into a multitude of possibilities for reading and interpreting the text. Daly offers a comment about the book on Powells.com in an attempt to clarify:

It is called Chanteuse / Cantatrice. It is a two sided book; it can be read either front to back, top of the page to bottom (as one generally reads English) but for a completely different but also "written" book, it can be read from back to front, bottom to top. Hence the odd-seeming title; it is two titles, for two books in one! It is a book of political poetry about collaboration!

Although her statement helps to begin to consider the doubling in the framework as a basis for interpretation, it doesn’t seem to actually be possible to follow these directions. Attempting to read the book from “back to front, bottom to top”, all of the words are upside-down. However, this openness suggests a crucial consideration about our modern political role as citizens given directives: each individual (individual person, individual reader) must ultimately find their own way to cope with the material that composes their lives. The book is ostensibly an extended meditation on war-- its impact, its language, and the difficulty of using language to describe it. Making this an apparent task that can be explored through reading as well, Daly raises the political stakes of the book as she claims that

The book is a privileged method of exchange
medium

This said (or written) early on, she constructs a space in which she can remain aware of her own involvement in historical process as a poet. Also, through such innovative spacing, she insists on the importance of structure as meaning in the political nature of text as well, and demands that the reader become an active participant.

With both titles, she has announced that she has stepped into the role of singer along with that of poet. The role of the singer is also split in the titles: the word “chanteuse” and the word “cantatrice” have almost the same meaning of “female singer”. However, “chanteuse” tends to imply that the singing takes place in a bar or club, while “cantatrice” refers to an opera singer. So which venue is this, high verse or common language? Daly’s language constantly oscillates, blends and finds new spaces within both, searching for a juncture that may somehow adequately describe our real experiences that exist between ideals and the mundane.

The first section of the book, called “Chanteuse” is a prelude that lays out the terms of the project by flipping between description and demonstration. Like Muriel Rukeyser, Daly uses both form and content to convey these political messages. In her use of voice, she finds it imperative to include self-examination in this mode. She immediately locates the question driving her method, asking “is singing saying?”(1) Soon, the answers start to roll in on continually varying metaphors connecting the evolution of song to subjects in the world that are in motion, that make sound themselves:

The poems are themselves suggestions for how one may respond, by finding the sound within language and using it to answer back to forces that act upon one in the world.

In this way, a singer uses the element of projected voice to express personal and social concerns, making the personally traumatic a cause for public examination. In the book, her primary voice consistently breaks into other voices, showing that a contemporary subjectivity has absorbed and must include many. Daly constructs a complex melody that follows traditions, but also strays and surprises. She develops a unique form for these poems throughout the book by creating patterns of text and space, where single words become emphasized in the course of her song, and spaces provide a rhythm.

This kind of play between voice and silence is at the whirling core of her use and examination of the binary, exacerbated into a deep divide between those we identify as other in times of war. In poem after poem, Daly finds ways to use doubling as a poetic that might provide an antidote. For instance, she repeats elements of language in the retelling of an event in order to reveal the double nature of identity when hiding oneself during war:

accidentally dropped her handbag
packed with a handgun
an officer reached to pick it up            for her—
she managed to beat him to it,
not beat him with it (4)

So how can the other that is created in war be resolved or what is “collaboration linked with peace”? (20) We are challenged to become her collaborators by bridging the traditional binary created between writer and reader, contributing our decisions about reading in various ways and joining her in this project. Although her directions can’t be followed to the letter to read the book in two ways, the gestures towards such conditions open up even subtler poetics. A new title at the end of each poem provides a profoundly “other” tone for the space after reading a poem, suggesting that rereading it “backwards” means remembering it in the context of the new title. In this new definition, Daly reconsiders the stigma that has been placed on the word “collaboration” as it emerges from contexts of war by showing that war isolates us as far as it can—first into groups and finally into a state of fierce survival as individuals. She writes, “we worked/ together to make/ collaboration a dirty word” (17). However, we are asked to participate in a resurrection of the term and social activity of collaboration, by preventing the song that has emerged from trauma from remaining an individual voice that is simple and directive, and that merely perpetuates the dynamic of trauma. Daly asks us to help transform the poetry into a message that we must not only listen to from many perspectives but must add to with our own actions.

Her procedure is itself a method that ”upsets inherited modes of life, loosens control of traditional authorities” (4) and ultimately provides many layers for various types of readers to gain access to the piece using language play, self-reference, page space, the structure of the book itself and direct political content. Above all, Daly demonstrates the height of human creative freedom through critical thinking that she finds the lack of the most criminal aspect of war, as well as possibly the cause of it. Here, her form creates an awareness of the value and importance of other viewpoints, actually providing gestures towards answers that can only be completed through collaboration.

Catherine Daly is the author of a number of poetry collections, including DaDaDa (Salt Publishing, 2003), Locket (Tupelo Press, 2005), Secret Kitty (Ahadada Press, 2006), Paper Craft (Moria Press, 2006), To Delite and Instruct (blue lion books, 2006), Chanteuse/Cantatrice (factory school, 2007), and the forthcoming Vauxhall (Shearsman Press, 2008). She is a teacher and software developer of online business applications for various clients, shttp://www.blogger.com/img/gl.link.gifuch as Fox, Goldman Sachs, NASA, and Universal. She has been teaching on and off since an undergraduate teacher’s assistantship in the History of Mathematics. Daly taught the first online poetry workshops in the UCLA Extension’s Writers’ Program in addition to critical theory, women’s studies, and literature courses at UCLA Extension, Antioch LA, West LA College, LA Southwest College, and elsewhere. She has written a longtime blog titled “A List, A Misc.”

Laura Goldstein is an experimental writer and multi-media artist whose poems have been published in print journals as well as online. Recent work can be found at The Little Magazine and PFS Post. She teaches writing at Loyola University and the School of the Art Institute of Chicago and lives and performs in Chicago. Her first chapbook, Ice In Intervals, is due out from Hex Press this summer.
Posted by CutBank at 10:38 AM