How To Be Perfect by Ron Padgett 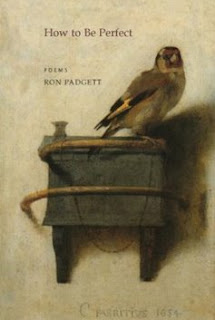 
For those who are already fans of Ron Padgett, reading a review of his newest book, How To Be Perfect, is not going to tell them anything they don’t already know (although they are more than welcome to stick around for this one). Padgett is one of a select few poets who manage to be authentically funny while digging deep into an internal wisdom, and still be able to maintain the all important “street cred.” He speaks in a next-door-neighbor frankness that somehow manages to bounce back and forth between the mundane and the absurd, but with a gentleness that urges the reader on like the calling of a warm bed on a cold night.

Padgett writes about things like washing dishes (“Rinso”), playing with a top (“Tops”), and anxiety over The Swiss Family Robinson, and all are enjoyable. As Padgett writes in “The Swiss Family Robinson”, “it’s interesting not to know / something that everyone else knows.” That is one of the most interesting things I’ve heard a poet say in a long time, and it makes me feel better that I’ve never seen an episode of Lost. In an age where technology brings you the facts as fast as you can type in the search words, managing to somehow keep away from that constant stream of information is a work of art in itself. Yet later in the poem, he comes to the discovery that “I would know something that / most people don’t know.” Anyone reading How To Be Perfect can leave with that phrase ringing in their ears.

Humor is one of Padgett’s greatest assets, from the obvious groans of

And they entered the ark
two by two

except for the studs
which were two by four

to the more cerebral

I think that Geoffrey Chaucer did not move
the way a modern person moves.
He moved only an inch at a time
[…]
[…] time moved in short lurches
and was slightly jagged and had fewer colors
for them to be in. But that was good. Humanity
has to take it one step at a time.

Padgett takes all the steps in one single leap, because he is that sure of his poetic footing.

The centerpiece of the collection is poem “How To Be Perfect.” It is a simple list of ways that you, too, can achieve perfection. The first directive is “Get some sleep” followed immediately by “Don’t give advice.” The poem starts to snowball from there to things like “Make eye contact with a tree” and “Design activities so that they show a pleasing balance / and variety.” It begins to hit its stride at the time of

Be kind to old people, even if they are obnoxious. When you
become old, be kind to young people. Do not throw your cane at
them when they call you grandpa. They are your grandchildren!

My favorite trio appear within the space of four lines: “Calm down”, “Visit foreign countries, except those whose inhabitants have / expressed a desire to kill you” and my own personal choice, “Look at that bird over there.” Perhaps a close second would be “Do not wander through train stations muttering “We’re all / going to die!”” or “Do not step off the curb until you can walk all the way across / the street. From the curb you can study the pedestrians who are / trapped in the middle of the crazed and roaring traffic.” If his membership of the New York School was not apparent before, at least his connection to New York City is crystal clear in those lines.

It’s no secret that most writers, poets and novelists included, almost always attempt to address the big picture. They ask the big questions, focus on the big scenarios, and expect to connect with a big audience who also wants answers about these big things. But what really connects people are the small things, the overlooked things, and ultimately this is what How To Be Perfect focuses on. From Shecky Greene to the Virgin Mary’s toenails in paintings of the Italian renaissance, it is these small moments that really bond the reader to the poet. Even sex in Edwardian England seems to be an everyday natural occurrence in Padgett’s world.

Go, pick up How To Be Perfect, and just enjoy it. But first, look at that bird over there.

Born in Tulsa, Oklahoma, in 1942, Ron Padgett is the author of numerous works including the poetry collections Great Balls of Fire, Triangles in the Afternoon, and The Big Something; a volume of selected prose entitled Blood Work; and translations of books by Guillaume Apollinaire, Blaise Cendrars, and Marcel Duchamp. He lives in New York City, where he is the Publications Director for Teachers and Writers Collaborative.

John Findura holds an MFA in Poetry from The New School. His poetry and criticism can be found or is forthcoming in Mid-American Review, Verse, Fugue, GlitterPony, and The Fortean Times, among others. He teaches in Northern New Jersey and lives with his wife, their puppy, and a charm of finches.
Posted by CutBank at 8:56 AM