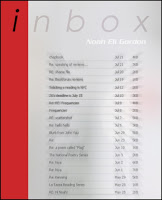 “I thought it would be interesting to see what would happen,” Noah Eli Gordon writes in his introduction to Inbox, “if I were to take the body-text of every email that was addressed specifically to me (nothing forwarded or from any listserv) currently in my inbox (over 200) and let all of the voices collide into one continuous text.” The result is “55 pages of uninterrupted prose that constitutes a kind of temporal autobiography”; from page to page the text appears as one long column:

I’ll try to catch up with you Sunday… I’m not really leaving till Tuesday. Otherwise, I’ll see you in Iowa. Once settled in KC I’ll get you that bookletized PDF for Eric’s chap. Sorry for the delay. I’ve been thinking about it but too busy & would want to take some time articulating my thoughts on the matter. How’s it going out there? Things in Ithaca are pretty cool, except for the lack of a job & the usual stresses of moving and settling in. But Josh Corey and Emily are really cool, and there seems to be a lot of energy (if not time) for getting stuff happening. And it’s frigging beautiful out here.

(Unfortunately no one excerpt can truly replicate the experience of reading Inbox. Any single passage taken out of context assumes a new meaning—as in the quotation above, which, ending with the exuberance of “it’s frigging beautiful out here” could almost be a prose poem. But to truly understand the Inbox reading experience, one needs to see how this sentence is immediately subsumed by the next topic: “Got a question. I know you’re probably insanely backed up with projects, but I wonder if Braincase might be interested in the mss. of those Rilke poems of mine.” And so on and so on.)

Seemingly inspired by several lines of artistic and poetic tradition—including the procedural poetics of OULIPO, John Cage, and Jackson Mac Low, as well as the appropriative poetics of work such as Ronald Johnson’s Radi os—-Gordon, in an interview for RainTaxi, cites the conceptual artist Sol Lewitt in explaining how Inbox, his “reverse memoir,” came to be. “The book is really just the execution of an idea, and a privileging of the idea over any other aesthetic criteria,” Gordon notes, “which is the truncated version of the definition Sol LeWitt gave to conceptual art: ‘The idea becomes a machine that makes the art.’”

To be clear, the only words of Inbox actually written by Gordon—-prolific author of several collections of poetry including The Area of Sound Called the Subtone (Ahsahta Press, 2004) and the National Poetry Series selection Novel Pictorial Noise (HarperCollins, 2007)—-appear in exactly two places: in the two page introductory letter/email; and on page 37, where one of his correspondents quotes an earlier message: “Your last email to me includes the great line, ‘it was around the time I quit playing music…and turned into a poetry geek.’” Most of the concerns in the text reflect the business of poetry—-readings, chapbooks, publications, critiques and revisions—concerns that the reflect the everyday struggle to get one’s poetry out into the world, but that over the course of fifty pages often approach the banal:

Thanks for the attachment. I look forward to reading it when the second issue is done. I don’t have you down for a subscription—it’s $12/22/30 for 1/2/3 issues, respectively.

1.5 spacing is the hot thing it seems these days! i [sic] never knew how to do it before in HTML until recently and now it seems like everyone’s doing it…

It’s not a forum for my usual review process, it’s a rah-rah forum, which is also cool to do and a kind of community service, I think. So- care to send me your thoughts on this? My deadline is 3/11.

How do we as readers approach this text? Perhaps we should take our cue from the conceptual writer and UbuWeb founder Kenneth Goldsmith’s “Sentences on Conceptual Writing” (2005, drawing on LeWitt’s “Paragraphs on Conceptual Art” [1967]). “It doesn’t really matter if the reader understands the concepts of the author by reading the text,” writes Goldsmith. “Once it is out of her hand the writer has no control over the way a reader will perceive the work. Different people will understand the same thing in different ways.”

With this in mind, Inbox is as much a product of Walt Whitman as of conceptual art. That is, Gordon’s “collision of voices” is not perhaps all that far from Whitman’s “I contain multitudes.” In Inbox Whitman’s multitudes are scattered among the nodes of an electronic network, allowed—-finally, perhaps—to speak in their own voices, fractured from the grip of the all--encompassing Whitmanic I—-while that I is replaced by an absence: the figure of Gordon himself. For the reader of Inbox, this figure is not of course Gordon the author (i.e., “Noah Eli Gordon,” the name on the cover and the copyright), but a construction born out of the accumulated inferences of the email texts. This duality, of Gordon the actual, physical person and Gordon the inferred doppelganger, is one of the sometimes eerie relations between concept and content reflected within the Inbox text itself, as in this passage where one of Gordon’s correspondents discusses another “Noah Gordon” existing somewhere out there in the extratextual poetry world:

And as I’m writing this, I’m only hoping that you are in fact the author of “The Frequencies.” If not, my deepest apologies. But if you are in fact the Noah Gordon that I’m hoping to find, I just want to say that I came across your book the other day and it has completely floored me.

Here we may remember another quote from Whitman: “I acknowledge the duplicates of myself.”

Although in his essay Goldsmith goes on to write that “it is only the expectation of an emotional kick, to which one conditioned to Romantic literature is accustomed, that would deter the reader from perceiving this writing,” Inbox does, eventually, deliver something of “an emotional kick.” The “heart” of this work, if that term applies, comes at the end of the text (as the earliest of Gordon’s saved emails), and throws a certain emotional resonance back on the preceding fifty-four pages. The message appears to be from Gordon’s mother or father:

Given the headline regarding 3 criteria for likely “spectacular attacks from terrorists I began thinking too much […] If anything awful should happen please attempt to contact one another and each of you to [sic] look out for your grandparents. […] …oh yes and if I ever become a body to bury do it in Lakeview Cemetary [sic] in Cleveland…near a tree. Have a great weekend and I love you all.

It is this “if I ever become a body to bury” which reinforces that it is the “out there,” the world beyond the page, to which the text constantly refers. Reading Inbox we are constantly asked to imagine the physical bodies these voices connect to—the “address,” so to speak, from which these voices “address” Gordon, and whose words we are allowed to overhear. The result is not only Gordon’s “reverse memoir,” and not only a snapshot of a certain neighborhood of the global poetic village circa 2004. In the end, Inbox, with its collision of voices, is a study in the ways communication shapes the very way we perceive others—and how we are perceived in turn.

Noah Eli Gordon’s books include: Novel Pictorial Noise (selected by John Ashbery for the 2006 National Poetry Series); A Fiddle Pulled From the Throat of a Sparrow (New Issues, 2007, winner of the Green Rose Prize); Inbox (BlazeVOX, 2006); The Area of Sound Called the Subtone (Ahsahta Press, 2004, selected by Claudia Rankine for the Sawtooth Prize); and The Frequencies (Tougher Disguises, 2003). He is the co-author with Sarah Veglahn of That We Come To A Consensus (Ugly Duckling Presse, 2005) and with Joshua Marie Wilkinson of Figures for a Darkroom Voice (Tarpaulin Sky Press, 2007). His reviews and essays have appeared in dozens of journals, including Boston Review, The Poker, 26, Jacket, and The St. Marks Poetry Project Newsletter. He writes a chapbook review column for RainTaxi: Review of Books, teaches creative writing at the University of Colorado at Denver, and publishes the Braincase chapbook series.