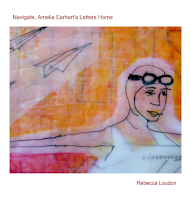 Rebecca Loudon’s Radish King and Navigate, Amelia Earhart’s Letters Home – her second book and first chapbook, respectively – both present themselves as collections of correspondence. In the case of Navigate, sender and recipient are clear: Earhart, our speaker, stranded after her Lockheed Elektra went down on or near Howland Island in 1937, has prepared letters and diary entries to friends and family whom she addresses in the poem titles, i.e. “To my Muriel, my doppelganger, my darling, my negative eye” and “To Miss Visser my one and only piano teacher.” (A glance at Earhart’s Wikipedia entry will unlock the mystery to most of the names.)

The poems of Radish King, however, sit inside the front and back of a postcard, but appear to be to and from the unknown. The characters that populate these poems are anonymous hes, shes, and yous that, in my reading – and the book lends itself to many – inhabit the speaker’s fiery and feverish dreams. They send the speaker poems chronicling the dream-memories to which they have been banished, simultaneously allowing and forcing her to piece together her journey through life. And what a brazen journey it’s been.

At first she remembers everything,
then starts slinging it off. The concierge
knows her name, all her lovers
in the same room, pare, paring, parings,


a pool on her pillow when she wakes,
pink or red or blue,
her sick sheets pulled down.

The poems of RK are sodden with hot-blooded sexual encounters, yet “pairings” is strikingly absent from the sequence in this passage, and this is telling. In RK, our speaker fails to connect on anything but a superficial, or bodily, level. Instead of holding fast to the memory of her beloveds, she has shucked them off, one by one. But they keep coming back to haunt her.

Earhart, on the other hand, summons those to whom she is emotionally tied, but is unable to connect physically since she is invisible to the world. She, therefore, is the ghost of Navigate. Consider one entry “From the missing diary:”

Virginia last night I dreamed you at twelve brushing my hair with the little yellow brush brushing brushing gathered my hair at my neck brushed underneath so carefully fifty strokes the handle warm in your hand my head in your lap I could smell you bristle I was bristle and clean fifty strokes to the side my pink ear exposed Ginny with strong hands you smelled of the forest my head full of electricity smelling you now my arms and legs and between my legs bristle with fur I am votre ours à fourrure my head in your lap your hands in my hair.

Earhart is begging and frenzied for contact. But the speaker of RK eschews the kind of nostalgia Earhart embraces, taking pains to writhe herself awake before those dream-memories are received.

In their solitude and delirium, the speakers of Loudon’s two works seem in conversation with one another. To her mother Earhart writes, “Dreamland and my own breath is gossip,” an isolation echoed in RK: “I’m alone in a body that doesn’t remember” (from “The dead-dog scent of lilacs on the last day in April”).

Loudon also allows the vocabulary of both speakers to overlap. In “flicker like a bluegirl under water,” from RK, the speaker says, “…she twisted each button/ on her sweater until it popped,” and Earhart writes, “All my buttons have twisted off.” While “chewing the leaves/ of a pepper tree my lips bleed,” Earhart writes to her sister, Pidge, and RK’s speaker “sing[s] the peppery tulips” in “Safeword.”

As a result of these conjunctions, the speakers (and books) begin to materialize for the reader as siblings under Loudon’s parentage. The speaker in RK is alone in her body, separate and distant from, yet terrorized by the phantoms of memory and imagination. To those back home, Earhart is the phantom, though her folks remain close in Earhart’s mind’s eye. The speakers are each a wing of the same plane, shooting off in opposite directions, but sharing Loudon’s backbone.


From Navigate’s “Where are you Fred?”

There is clotted cream on the table,
you are round and soft. You fell
you fell out of the sky.


Radish King and Navigate do indeed “join hands,” each book informing and intensifying a reading of the other. The books are best read in the evening before bed, when one’s own ghosts begin to be roused.

Rebecca Loudon is the author of three collections of poetry, including Tarantella (Ravenna Press). She is a violinist with Philharmonia Northwest Chamber Orchestra. She teaches violin to children. She has written the libretti for two choral pieces and a five part song cycle for orchestra and soprano.

Caroline Ashby is a graduate student in Library Science and former
private investigator, with a BA in Creative Writing from CUNY Hunter College. She's also an Assistant Editor for Tarpaulin Sky.
Posted by CutBank at 9:36 AM