Histories of Bodies by Mariko Nagai 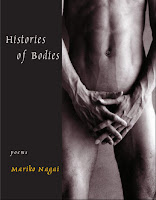 
Mariko Nagai’s award-winning book illuminates desire, grief, faith, the fallibility of words, family and other timeless themes, often using the contemplative voice established in the title poem: “In this early morning, words / are bodies / heaped up high, each body imprinted with past, they are remembrance. But we have / already turned our eyes inward, we do not hear.”

Reading Histories of Bodies is like delving into the nautilus. We spiral into the space Nagai creates, returning to repeated images and ideas like cicadas, physicality, and memory. She draws you in with lines that surprise you: “The snow falls like the knife of the butcher cutting the meat into glorious names, like the / plums left unplucked, warped with bruises hidden underneath their raw skin” (“Practical Truth”, p. 51). Here, the contrast between falling snow and the violence of the knife, the sheer weight of the plums, is hard to visualize, especially when subsequent lines describe the snow as being “light”. This could seem like a surreal simile pushed too far. How would snow fall like the knife of a butcher? What are the glorious names? Nevertheless, the poet succeeds by way of Pope’s “sound before sense”.

Sometimes the force in poetry comes from a source beyond us, sometimes the best poetry is possessed by strangeness, like the prophet Ezekiel eating the scroll in the Bible, or Christopher Smart exclaiming in “Jubilate Agno”. Nagai’s strongest poems enter the psychological territory where the “real” that grounds us to the world begins to blur with mystery.

On occasion, the language is less polished. One poem is titled “Untitled”. A paper crane is likened to a butterfly—“See how their wings are evermore fragile, / a buttefly” (p. 25) —which is too similar to produce the spark of wonder the best metaphors can. In another poem “walls are thin like a torso of a woman / with anorexia nervosa” (p. 37). Now and then, too, the closing lines of the poems explain a shade too much. Apart from these minor instances, most of the poems unfold gracefully without faltering.

One of the more memorable poems is “Many Are Called”, with its echoes of Matthew 3:17. In Nagai’s poem we’re given an omniscient view of a crowded train in Tokyo:

Underneath this city, there is another city, one more modern, more recent in its origin. Here, in these dark tunnels where pomegranates fall, all these thoughts fly around like moths, lured by light, by sweet smell of decay, trapping themselves by their own free choice in the confined space of their making: It can’t already be June, it can’t already be Monday, that’s what they say, that’s what people keep muttering to themselves this morning as they cradle the last of the sleep in their coffee cups, for the precious moments in which they huddle in themselves before they must sign off their lives to something they don’t believe in, to something they think they cannot escape from. As they rock in the rhythm of the train, someone thinks, A moth in spider’s nest, though she does not see the intricate weaving of the thin threads, ready to untangle between our fingers, snapping the threads. But it’s like this: It’s already June, I’m already 28 and I haven’t done anything, many are talking, comforting us in these minutes of our lives when we descend down to darkness, to darkness so dark that we are helpless, our bodies swaying left to right, left to right as if we’re rocking in prayer, but we are not praying. We’re boxed in the freight, we’re boxed in a subway car, this is the death train, but unlike them, forced away from their homes because of blood, we chose this train, we chose to be on it, we are boxed in, we’re as helpless, we tell ourselves, positioning ourselves to the gravity, the pull of the train. Our highest dreams thrown out like our last night’s dinner, a woman’s dream flies past, landing silently on the subway floor like the last note of an aria, I wish someone loved me, I wish He loved me, a thought so light it floats quietly down, hovers an inch or two above the floor, then lands, landing as someone steps on it. I wish somebody loved me, but I’m not pretty enough, I’m not smart enough, she closes her thoughts from us, she looks down to the book on her lap, the thick one, heavy like her sadness, but she doesn’t stop her reading, the thick book stays where it is, the woman, though, reads so little, doesn’t really read, just daydreams, her hopes going where we are going, she stays where she is, on the seat across. We are all going somewhere we have to each day, pulled by the invisible strings, and we say, I can go no other place, this is where I belong. No, we go to places only if we must, but must is a habit, after all, we can go anywhere as long as we let ourselves, anywhere we want to, only if we want to, she can stretch her arms as if in flight, and leave, leave this train, this city…only if she wants to. We think there’s no way out, our lives guided by some invisible lines only fate has right to hold, right to control. But we are closer to grace, we are closer to where we were before we were born, before we forgot the songs, before we forgot the promises, we are closer to grace in the darkness of our own making, we are not of time—only if we let it, only if we let the watch unshackle us, but we forget, as we have forgotten, as soon as we open our eyes. Many are called and many do not hear.

Here, Nagai uses pathos and gentle humor to explore what popular culture coins the “quarter-life crisis”—a phenomenon wherein the post-college crowd worries about the future, accomplishments, partnerships, or lack thereof. Immediate problems always seem urgent to the person involved, but Nagai reminds us that our daily concerns are not insurmountable. There is more to the world than the tangible, there is another world, not one of platitudes, but one of beauty and terror and surrender, the place we could reach if we would let time “unshackle” us.

At its core, this is a book about making one’s way through the multiple layers that define us. We can only see the future when we reconcile the past. The poet says it best in “The Acceptable Death” (p. 62): “Here are two cities, we live in two worlds. / One of our familiar, one of our imagination.” In “A City of Absent Lovers” (p. 54) we glimpse this world of imagination again: “…you imagine that there is some connection between love and beauty, something so intangible that this is where all the songs come from, and, when the last note lingers like a lost memory, where they go.” This where, this place where all songs originate, this place “before we were born” can be thought of as the more sophisticated version of Oliver Wendell Holmes’ “stately mansions”.

Like the nautilus, Nagai’s poetry is both intimate and otherworldly. What appears to be coolly elegant at first draws you towards it and carries a roar, what appears to be built from simple images is, on a second reading, iridescent.

Born in Tokyo, Japan, Mariko Nagai has lived in Europe and America most of her life, earning a Masters of Arts degree in Creative Writing with a concentration in poetry from New York University, where she was the Erich Maria Remarque Poetry Fellow. She has been the recipient of the prestigious Pushcart Award twice, in both poetry and short story, and has received numerous fellowships and scholarships from art foundations and writers’ conferences. Her poems have appeared in journals such as The Gettysburg Review, New Letters, and Prairie Schooner, among others. She also translates modern and contemporary Japanese poems and fiction into English. Currently, she teaches creative writing and literature at Temple University Japan Campus, where she also directs the Writing Programs.

Karen Rigby received a literature fellowship from the National Endowment for the Arts in 2007 and an MFA in Creative Writing from the University of Minnesota in 2004. Her second chapbook, Savage Machinery, is forthcoming from Finishing Line Press.
Posted by CutBank at 12:07 PM