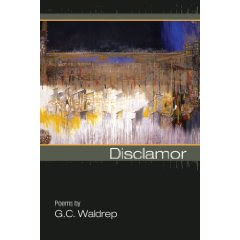 In G.C. Waldrep’s remarkable second collection, we are asked to deal with what comes after war — the troubled peace that can leave us disillusioned. Waldrep forces us to examine how it is that we cope with these reminders, which so often result in us losing connections to each other. Waldrep’s skill, though, is in mitigating the harshness of the world we inhabit, as well as finding ways to remind us that we can and must do better, especially for our descendants. He “craves the aftersilence” (“Cloud of Witnesses”) and feels a duty to give us hope or, at the very least, some assurance that we can still hope, even after being confronted with the tragedies war brings.
The desire for consolation plays a large role in the book, especially throughout the “The Batteries,” a nine-poem sequence inspired by sea-coast fortifications along the northern California coast. The first, “Battery Rathbone-McIndoe,” reveals how hesitant Waldrep is, how awkward he feels being at one of these decommissioned gun emplacements. There are “so many ways [he] could begin,” but his perspective has not yet taken shape, he has not yet made up his mind to celebrate the fact that these sites have been turned into tourist attractions, or to lament that they were ever needed in the first place. This wavering keeps cropping up in the poem: “Can you believe I once stood for war? / (Can you believe I once stood against it?)” And when he describes a lone sailboat far out in the Pacific, we can’t help but notice the parallels:

It moves slowly, from left to right,
as if trying to say something
very precise,
and then again, from right to left,
as if erasing.

And yet, all this indecision fades when Waldrep recognizes:

I walked here, there were
no guns, no gates, now
everything is permitted.
No one had sold the sand in my shoes.
No one has yet tasted his death
on my tongue,
this is before
as there must always be before
(just as what comes next
is after—)

Though Waldrep may have free reign in visiting the armaments, he still has a responsibility in capturing this scene in order to not let us forget how things could have gone differently. He serves as witness, then, and must speak, a sentiment played out at the end of “Candlemas, Vermont”: “Lear said / nothing comes of nothing. Speak again.”
Speech is what will spur action and, even more importantly, memories — both good and bad. This act of not allowing us to forget will hopefully save us because, as Waldrep notes when he sees the graffiti covering the walls in “Battery O’Rorke”:

What is written here fades quickly.
Faces drawn in chalk,
names,
the idea
of defense, of a beach
ripe for landing.

West, east, the longitudes of war.
This is no place for monuments.

The poet takes responsibility for making sure “what is written here,” this place’s ugly history, is recorded and examined before these mistakes are repeated. In a moment of doubt, Waldrep considers himself to be a “very minor poet,” which does not do himself or his work justice. He is much more than minor; he is “a poet of broken things” (“Batter Bravo, (first)”), a writer who can treat what is broken with both compassion — “They are trying to believe / something they have forgotten. / Or to make us believe it” (“Many of Us Identify with Animals”) — and deadpan humor:

AND THE GOD OF USA DECLARED
I SHALL INCORPORATE WEAPONS
OF MASS DESTRUCTION
INTO MY NATIONAL PARKS.

— This is not quite right. The weapons came first,
mass, the destruction; then
picnic tables. (“Battery Wallace”)

The poems surrounding, or supporting, “The Batteries” show a different side of the poet. Whereas other poems in the collection rely on a collage of graffiti, personal observations, facts and figures, and research into Miwok tribal lore, these poems require close, slow reading in order to appreciate the quirky and oddly beautiful images:

What I never know is
when my life will change, or when the rain will stop
or at least assume a more congenial vector.
(from “Cosmologies of Zinniae”)

But “The Batteries” is where Disclamor truly shines and where the book ends: “I am not afraid of the story you ask me to tell. / (In any case it is no longer / my story.)” In fact, it has become our story, a mutual agreement that in reporting all that he has seen, imagined, and felt, Waldrep accepts us and makes us accountable as well. We must learn from and pass on the story of what comes after because we are witnesses now, too.
**
G.C. Waldrep received a BA from Harvard University in American History in 1990 and a Ph.D. in American History from Duke University in 1996. His first poetry collection, Goldbeater's Skin (Center for Literary Publishing), won the Colorado Prize for Poetry. His poems have appeared in Poetry, Tin House, Gettysburg Review, and other journals. Waldrep spent 2003-05 at the Iowa Writers' Workshop. In 2005-06 he was visiting professor of the humanities and social sciences at Deep Springs College in California. He currently lives in Lewisburg, Pennsylvania, and teaches at Bucknell University.
**
Michael Levan received his MFA in poetry from Western Michigan University and is currently pursuing a Ph.D. in English at the University of Tennessee, where he serves as assistant poetry editor of Grist: The Journal for Writers. His poems and reviews can be found in upcoming issues of Nimrod, Third Coast, and CutBank. He lives in Knoxville with his wife, Molly.
Posted by CutBank at 3:31 PM