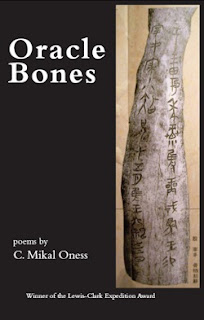 One of the most difficult tasks of a poet is to capture life and death while invoking the musicality of language. By capture I mean more than portray or show; I mean enact. A good poet translates emotion into words, inviting the reader to share an echo of what was originally felt. A great poet transforms emotion into song, creating a reverberation that engages the reader’s own psyche. At his best, C. Mikal Oness is a great poet. In his first book, Oracle Bones (Lewis-Clark Books, 2007), Oness demonstrates a mastery of language that engages the reader on a strong emotional level.

Oracle Bones is divided into three sections: Divinations, Scapulimancy and Charms, with an introductory poem, “The Handworm’s Hipbone,” setting the stage as an exploration of “the dark”:

Under the overturned wheelbarrow,

in the dark of that insulated space

warmed by the decay of last year’s leaves,

is the dark of the dark and building soil,

is the dark of the ever-dampening.

so used to all of its damp and warm

containment, and having fled so quickly,

it left behind the decayed, or half-decayed

body of an ordinary bird, a black bird,

the remnants of its red brassards browning

beside it. The remnants of last year’s leaves

also lain by its head for so long as to be

blackening beside it, silent and benign,

as if sent there by charm to diminish

to become naught in the heart of the harrower.

Oness’ goal in Oracle Bones is to decompose the darkness, to diminish shame. He does this partly by letting it fly free like “a covey” and partly by placing it next to something more “benign, as if sent there by charm.” The first technique involves the telling of the story—liberating it from its dark, hidden space of silence—and the story Oness tells involves dark confession as well as transformation.

In the first section, Divinations, we learn from “August 1990” that the poetic narrator accidentally killed his friend and mentor, Don, in a tragic car crash five years earlier. The source of the narrator’s great shame is that he was driving drunk. This is the main event of the book, the event that less significant events—like leaves—blow up against. The poem begins with small details of the narrator’s brunch with Don before the accident:

And it seems now as if brunch were a dream—

a fourteen dollar plate of shrimp and ham,

champagne from ten to twelve, and staggering

to my car. What did we talk about? Our jobs?

It continues with the startling clarity and painful consequences of the crash:

I only remember this: a sharp right turn;

in retrospect, a dreadful look of horror

on a woman’s face; then time goes past; I wake

to a loud slide, a crash of glass; my dash

board spins; I fall against the roof, the road

through the open window; I pull myself

out of my car, I think; I walk myself

past Donny, past a full crowd looking on.

And powerless—that’s what it is you know—

on the curb pulling my ripped shirt over

my head, refusing help from the paramedics—

I am refusing help for the last time.

Because years later walking down the street,

or sitting on my bed at night, it comes

to me that I have done this, and someone

is dead, and that a mother must still weep

just north of here; I can begin to hear

her now. I can begin just now.

Oness builds both meaning and musicality through repetition. When the narrator is “refusing help from the paramedics,” the reader sees how unaware he is. Later, he is “refusing help for the last time” because he realizes how much he needs it, and not just for his physical wounds. The mother who “must still weep/just north of here” is finally something he can “hear.” All of the talkiness of the poem slows down, inviting the reader to be in this quiet space with the mother’s sorrow. Just as the narrator “can begin to hear/ her now,” he can also “begin just now.” He is beginning the process of healing through accepting, truly accepting, his part in the tragedy. This is a powerful place to begin.

The second technique Oness uses for decomposing the dark seems inherently flawed. The narrator refers to placing something benign as a charm next to the dark. “The Handworm’s Hipbone” opens with a mysterious Old English quote described in the appendix as a “charm against wens.” Not familiar with the term, I learned that wen means “a benign skin tumor, especially of the scalp.” This definition deflates the power of the mysterious Old English as well as the enigmatic definition Oness supplies, and not (I might add) in a good way. The terrible beauty of the “dark of the dark” is trivialized when seen in comparison to a skin disease. Perhaps this is Oness’ goal as well, to render the darkness as “naught in the heart of the harrower,” to make it disappear, or to decompose into something indistinguishable, and therefore less significant.

Unfortunately, the book loses some steam after the opening act. The reader catches glimpses of Don, the master ship crafter and mentor, in lively imagistic poems like “Sorbies” and “Chisel.” For the most part, the narrator’s earlier moment of recognition—awoken by intense tragedy—dissipates, shrouded in references to fishing, boats, Beowulf and runes (thus the title Oracle Bones). By section three, Charms, Don has almost completely disappeared. In “Mentor,” the narrator claims, “Forgive me: I have simply forgotten who you are.”

Oness seems to drop the main event of his book out of convenience, though, rather than a true act of decomposition. When asked about the different syntax and approach in poems like “August 1990” and his Beowulfian “Sea Voyage” in an interview with Sheri Allen, Oness said that he simply assembled the poems he had written over a period of time.

The poems were written at different times as I was engaging in different formal projects, and then, like so many others who put together books, I emptied a large room and played several games of poetry solitaire with the poems, experimenting with arrangement (Oness, The Southeast Review online).

When the narrator tells the story of the birth of his own child, it’s a bit jarring—like pushing in a puzzle piece that doesn’t quite fit. There seems to be yet another dead child to account for, a child of the narrator’s. At the beginning of “In Memoriam” he says “All our relatives have turned to roses/in my mother’s yard, as has my child.” This losing and gaining of his own children is a compelling story, and definitely one I want to hear, but not in this collection. If these poems had appeared in a second book, they would have seemed cathartic. In this context, they seem simple-minded and self-serving. They make the whole enterprise turn sour for me, like a compost pile someone forgot to turn and pawned off as soil. For example, the poem “Struck” shows maple leaves alive and shimmering in light:

Under the silver-leafed maple, my house

gleams: inside, my one-year-old.

In any breeze the tree shimmers

A white light burns in a pure wind.

I want to believe that the purity of this wind is real, that there’s a sweet light emanating from the narrator’s house, his home, but I’m not yet ready for this. The wound from the car accident is still so fresh in my mind that I need more time to heal. All the charms and runes and fancy terms like “scapulimancy” (which refers to the heating of bones to produce cracks which are interpreted as oracular signs) feel like a distraction to me, a denial of the work at hand. Unlike the passages where Oness is great, where we are asked to embrace the oracular wisdom of his words.

C. Mikal Oness is a homesteader, poet and printer, living in rural Minnesota. He is the founding editor and director of Sutton Hoo Press, a literary fine press producing hand-made limited editions of poetry and prose. A graduate of the Iowa Writers’ Workshop and the University of Missouri, Oness has received the Toi Shan Fellowship from the Taoist Center in Washington, D.C. His poems have appeared in The Iowa Review, Shenandoah, The Colorado Review, Third Coast, The Bloomsbury Review, Fence, Puerto del Sol, and other magazines. His work has been awarded the Mahan Poetry Prize, an Academy of American Poets Prize, the Mary Roberts Rinehart Award from George Mason University, and a Wisconsin Arts Board Grant. His book of poems, Water Becomes Bone, was published by New Issues Press in 2000 and was awarded the Posner Prize in Poetry by the Council of Wisconsin Writers. He has a limited edition chapbook, Runian, from Bergamot Press, and another limited edition, Privilege, from Cut Away Books. His manuscript, Oracle Bones, was selected for the Lewis & Clark Expedition Prize and was published in 2007.

Karin Schalm lives with her family in Missoula. She works as an administrative assistant at The University of Montana, rising early most mornings to walk her dog in the dark. She is a Master Gardener, a labyrinth lover, and a big fan of mountain wildflowers.