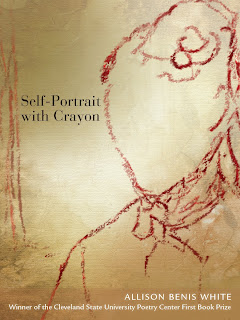 Above all, Allison Benis White’s collection of poems Self-Portrait with Crayon teaches us the simple, unforgettable maxim: pain is reach.

The collection begins with what is gone: “The hidden are alone too. I crouched in the closet, between my mother’s skirts and shoes, where the legs should be” (5). Without a body, clothes outline lack, their shapes marking boundaries between body and disembodiment: “The shoulders are the span of the hanger and the mind is the hook which suspends the entire dress” (5). The image of the mind reduced to a hook does not speak of pain, but we get it.

Here, the thing gestures toward an idea, a non-thing, one cannot otherwise hold. In this sense, the thing—a closet, a dress, a hanger—allows connection, a sudden narrative snap: “People lose their minds and leave in the middle of cooking salmon” (5). This reach—the move to connect loss to a moment, a kitchen, the smell of a pink-bodied fish—rises from the compulsion to anchor ourselves in the material world, ground ourselves in the sediment of objects, and attach to some small, real thing before we are capable of consolation: “I will tell you something quietly: we tried to send her a birthday card, but it was returned, wrong address. It is common to know very little, if anything” (5).

A salmon dinner, a birthday card, a wrong address—these are the cold, hard things that punch, punctuating our otherwise amorphous and mass-less despair. Yet they are the details that allow us to articulate and imagine—here, though, sketch—what is otherwise unspeakable and unimaginable. White knows grief calls on us to represent loss in the details, to perceive boundaries between the ordinary and extraordinary, to sketch rather than bullet, to reject chronology, to begin in the middle, and, yet to tell anyway, to narrate and discern and forge universals out of abstraction, to find yet another thing that might, finally, point at what to do next or what to avoid or what, simply, to accept: “People exist for as long as possible until it is too difficult to matter” (5).

On its own, the collection’s first poem “From Degas’ Sketchbook” offers the image of how difficult it is for a girl hidden in her mother’s closet to matter to someone gone and, simultaneously, how difficult for a mother “to matter”—both in the sense of being worthy or recognized worthy and in the sense of materializing, coming into being to embody the articles that, to a closeted, crouched child represent lack. Somehow, at once, a mother mothers as long as she can, and a daughter recalls her until it is too painful or too cumbersome even to conjure her in images, to bring back someone gone. Here, grief is a central interior impulse that reaches out, like the motion of a hand drawn to touch something untouchable before it retracts, repelled.

Together, the poems in Self-Portrait with Crayon are a study in mourning and melancholia, a grammatology of sadness—one which outlines the features of despair, the rules of mourning, and the shape of our efforts to live through it.

Despair, White understands, opens eyes to the things before us with an urgency that shackles us to images that might have otherwise been fleeting, like a cruel time machine in which there is no travel, only the unending awareness of time and an acute sense that past, present, and future are tidy, irrelevant categories that mislead, distract, and relieve those not mourning. Like this: “If I press my hand against the window, no one will die sooner or reverse directions” (8). Or this: “Before I was born, my dog buried a plastic frog in the side yard when one of her female puppies died—she needed somewhere” (9). We are not safe from what already came or what has yet to come; any minute we might feel every loss all at once—and not just our own, but through ours, we’ll feel the loss of others as well. And so we must attach loss, freeze it, give it “somewhere.”

From White’s poems, readers can glean recognizable, patterned responses to loss; mourning forces our focus on the particulars, for instance—which is to say that people mourning know what is not nothing: “I want to reach things I can keep” (54). Like wounded dogs, they need objects—to attach, to express themselves, to project meaning onto, to represent—as if to re-imagine or retool or redesign the shape of the interior, driving, unsettled mind.

People mourning outline impressions even as they suffer imprint: “When there is nothing left, everything is possible” (26). Or, perhaps it is that they deal with imprint by outlining impressions, as if to cast imprint off. In “Interior of the Rape,” for instance, White’s cutting characterization of human bonding is so sharply resonant it is, one moment, beautiful: “I will not let you sleep follows the pattern of most affection”; a step later, though, she tugs at the pattern’s brutality instead: “This is the feeling of a leash at the base of your neck” (25).

People mourning grasp for universals among the particulars: “We will live as long as we have someone to tell” (26). The reach for human patterns is the effort to seek solace in the omnipresence of pain, to find dull, pain-diffusing, trauma-abating normalcy in suffering—like this: “It is common to rock the sick in your arms. It is common to rearrange the body into a comfortable position” (23). And this: “It would be unnatural to place the arms at the sides, torso unprotected” (23).

Understanding fear overcomes us, White sometimes offers the patterns as instruction: “when you enter someone else’s room, it is important to whisper her name before you touch her, so she knows you are approaching, and does not become alarmed” and “If someone breaks into your house at night, my father advised, pretend you are dead” (28; 24). Here, advice exposes everyone—those who might break in, those who fear them, those who cannot do more than recommend we play dead. Readers sense White does not endorse an action more than she scorns our resignation to fear—ambivalently, though, while representing the lives of people who live by it.

People mourning consider what will be gone soon: “Whether we miss less what we know will disappear, I am tired of seeing” and “A sponge attached to a hand which is attached to an arm. Which is crucial. Anxiety thrives on the unknown. If her hand took the sponge away, there would be a cool empty spot on the child’s neck” (41). The move to reflect on what is here now but soon might not be is an exercise in taking the part away from the whole so that one might imagine another scenario and thus come to know the unknown—to treat anxiety with anticipation, essentially. Lives marked by a history of hard times know leaning on the cool-headed expectation that the worst is coming makes life better now. Because it means we will be less anxious and more prepared.

In “Horse with Jockey,” someone points “to an X-ray of his chest,” saying, “The human heart is an apple,” and someone else asks, “But what shape or comfort can I make with my mind?” Self-Portrait with Crayon is one.

Allison Benis White's poems have appeared in The Iowa Review, Ploughshares, and Pleiades, among other journals. Her honors include the Indiana Review Poetry Prize, the Bernice Slote Award from Prairie Schooner, and a Writers Exchange Award from Poets & Writers. She is currently at work on a second poetry manuscript, "Small Porcelain Head," which received the 2008 James D. Phelan Literary Award for a work in progress from the San Francisco Foundation. She teaches at the University of California, Irvine. See more at www.allisonbeniswhite.com.

Kathryn K. Stevenson earned her doctorate in English from the University of California, Riverside, where she teaches writing classes. She is obsessed with, and writes academic essays about, "adherence," or the bonds forged between peoples under duress--a theme that appears, magnified, in her fiction, non-fiction, and songs, which can be found at myspace.com/radiochord.