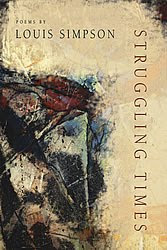 Louis Simpson, no stranger to poetry with a long career as a working poet, professor, and noted translator returns to the stage with a sweeping book of poetry focused on the current sociopolitical status of America via a very personal gaze. Simpson, an aged man who fought in World War Two, darts back and forth from his own childhood and years of youth to the present day offering small illustrations and demostrations of human experience in their various manifestations. Simpson is a man my great-uncle’s age, a person from another time in a certain sense and his ability to duck back to experiences such as his wargames with a model ship as a child is impressive in its sincere ability to put life itself in rough context and to allow Simpson to also write poems such as ”Astronomers in Arizona” where he explains, starting off with a quote from a news report:

are racing to build the biggest

Why are they racing?

What do they hope to find?

From a poet lacking Simpson’s experience—as both a poet and a man—such would seem not only cynical but an overly coy attempt to be funny with a piece of news-writing which at worst is simply overwrought. From Simpson, however, and in the larger context of a book that contains direct commentary on contemporary world events, the economy, and other complex issues but also notes how the author has left a pot on the stove and smells it burning as he absent-mindedly leafs through his newspaper, this approach works. How ironic that scientists who study the very span, depth, and scope of our universe should rush to complete the construction of their instrument! When Simpson begins another poem with the words ”he first fell in love when he was sixteen” it doesn’t seem trite nor when he references the uniform of a French officer in describing someone does it seem odd or a great stretch, but simply one observation in a collection of many. Simpson brings a wealth of varied experiences to his writing and does so in such a humble manner that he encourages us to consider the small things in life, such as when he waits for a man to come and collect old clothing from his house (one assumes for the poor or some charity) and the man is slow in showing up: here the poet takes up an everyday domestic chore and one, at that, which really depends on someone else. When Simpson devotes another poem to war as imagined in the guise of Grant’s position in the Civil War, it doesn’t seem over-reaching and Simpson’s imagined Grant is a character you encounter with ample empathy, wondering if this is also perhaps an example of someone waiting for others to complete vast chore.

Thus much of the strength of Simpson’s work here is that he provides some immediate examples of how he views our current times, never with heavy-handed commentary but via astute demonstration and he grounds these obersvations with tales from life experiences and insight into other times. Nothing is isolated but everything is personal. His poem ”Suddenly” is perfect example of this; in fact, it is the poem presented on the back cover of the book and rightfully so as it’s easily one of the finest stand-alone pieces in the entire book:

The truck came at me,

but I got a dent.

She gives me a little smile

and goes back to her nails.

From this mundane start out of the box, Simpson provides a wealth of introspection into the place where we stand still for a moment in time and the fact that despite our overall riches and technological progress, we are in fact in the midst of ”struggling times”. Perhaps as darkly as anything, even as we lack a world war (at least a tangible one) now, we also lack the agency for poets to be concerned with the type of writing that Hart Crane or T.S. Eliot brought forth; instead, we are driven to concern with smaller things—but out of very necessary pragmatism. Our constant media communication of world events has sent the poet scampering away from the very large to the very small and leaving, perhaps, those large things for the astronomers and their ”biggest telescopes ever”.

Then there are poems such as ”In Old New Orleans” where the reader cannot be certain whether Simpson is talking about a current event (Hurricane Katrina in example) or not. The poem could have been written since 2005, or before, as it mentions modern times yet when is modern? What is modern? In ”Tall Girl Running” when Simpson compliments a girl with long legs out for a jog, we can’t be sure whether it’s a teenage Simpson speaking or Simpson in his current age: often in this collection Simpson runs back and forth through time, covering such a span that his words can be taken in various meanings. If we had, in this poem, a teenage Simpson (probably) he hardly was thinking of genes and their role in determining the phenotype when the girl shouts back ”from my father” when Simpson asks where she got her nice long legs; however, by opening this poem with a quote from biologist Richard Dawkins, Simpson makes the observation of the pretty girl more about science than sexual attraction.

Not all of Simpson’s poems though hit their mark: In his short poem ”The Constant Reader” he celebrates reading in a way that is neither new nor especially meaningful. A comment by Susan Sontag, though not a poem at all, about how she was jealous of a friend who broke her leg and was thus confined to days spent inside reading speaks more about the bookworm’s plight than Simpson’s effort:

I do not see the plays

and miss all the operas.

Let those who must love.

As Chaucer says, ”What sholde

I bye it on my flesh so deere?”

The truth is, I prefer

This poem is also odd in that it feels a rather poor fit for the rest of Simpson’s collection as most of the other poems in fact speak of the wealth of experience Simpson has had, and much of such experience is very run-of-the-mill, daily, things we can all relate to and the joy is in seeing what grace Simpson offers in describing the mundane. He doesn’t come across as someone tied to literature at all in these poems, someone very intelligent, yes, but also someone who is much a man of the people with his finger on the pulse of life. In other poems, such as ”The Omen” which deals with the author Alexander Puskin’s fatal duel with his wife’s lover, Simpson writes of literature and history but in a way that makes it seem as if these were instead events he’d witnessed, or perhaps Puskin was an old friend. In the poem ”A Spot on the Kitchen Floor” Simpson writes about finding a bug wandering across his kitchen and picking it up with a piece of cardboard, and he writes of this in such a touching way that it really illustrates what a masterful poet he is, showing what triumph can be located in the smallest of incidents.

In other cases, it is large incidents that are provided the gravity they request as in this example:

You have to be careful

what you hear or see.

In Afghanistan I saw

the man and the woman

who were caught in adultery

buried up to their heads.

Their children were brought

and told to throw stones.

I can still see the heads

twisting on the ground.

The poor devil in Papillon

with his head in the guillotine . . .

looking up at the sky

I think was the worst of all.

Even so, as powerful as these images are, one cannot tell if this is current-day Afghanistan or not, nor perhaps does it even matter. Simpson is working very much as a poet, even as his sparse and simple wording often could remove his writing to the pages of the journalist. Lacking any real background on where Simpson experienced some of these situations nor having more of an extended trajectory of their meaning both allows them to shine as small examples of large and important moments while removing them from the extended dialog they could have presented. In fairness, such a dialog may not even be what Simpson desires though.

In all though, Simpson has presented an impressive collection of poems in this slim book. He has refined his craft to a high degree and it is obvious in the quality and immediate focus of his work. At times, I longed for further details and also wished that, as BOA Editions’ press release had indicated, Simpson’s work was more about these current ”struggling times”. Only a handful of the poems really touch on the socioeconomic woes the world is now experiencing and from a poet of such experience as Simpson I could imagine a really powerful set of poems on this topic, but ”Stuggling Times” feels more like your average collection of poems written over the past couple years than a complete and focused effort. Still, it is a collection much worth having on one’s bookshelf.