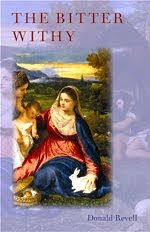 Walking Through the Halo: A Review of Donald Revell's "The Bitter Withy"

For a while now, and especially since his 2003 collection "My Mojave," Donald Revell has rarely strayed from what some might call a myopic devotion in his work to God, Heaven, and redemption. Not only that, but his poems are overt enough in their attention to these subjects, that the real miracle might be reading a Revell poem that does not at least reference in some way God, Jesus, Heaven, Prayer, or Eternity. Indeed, his newest collection, "The Bitter Withy," is no exception.

Beyond that, "The Bitter Withy" has exposed a few of Revell's new favorites: rainbows and hummingbirds, which make numerous appearances in this collection:

Just at dawn the full moon
In its coin of rainbow
Called my name.
(TOOLS, p. 3)

The birds knew, and the rainbow too. I was looking.
(MONTEREY, p. 4)

Walking across the ocean,
Walking on flowers nowhere to be seen,
I walk on gold.
So says the hummingbird.
(CAN'T STAND IT, p. 6)

Sovereign of my heart,
I am shouting at nightfall:
Bats above me,
Hummingbirds skittish below the bats,
Almost like dragonflies.
(AGAINST CREATION, p. 44)

What I find remarkable about Revell's work, then, is its ability to keep strange his world of God, heaven, rainbows, and hummingbirds—a world that, in the hands of any other poet, wouldn't be inhabitable even by Hallmark.

Take, for example, the final stanza of AGAINST CREATION:

Adam's fall invented the future.
He tied the bats' wings onto dragonflies.
Nature, even as it dies, abhors imagination.
What men call Extinction,
I call Home.

Here the reader finds a world in which imagination is not only unnecessary, it is abhorrent—an offense to the already strange world the speaker observes. For Revell, the poet's role has less to do with invention than it does with adequately reporting what is already there.

AGAINST CREATION also illustrates Revell's subtlety—a must in a book of such obsessive thematic recurrence. Removed from their context in the poem, the final two lines might read as a lament regarding death's ever-present shadow. Within the context of this poem and the collection as a whole, however, these lines point to Heaven—or "Home," as the poem puts it. What keeps this closing from becoming saccharin, though, is the presence of such unexpected words as bats, abhors, and Extinction—all in the final four lines.

While all of Revell's recent work deals openly with his Christian faith, "The Bitter Withy" is interested in how such a faith alters how we confront our mortality. The approach of Death and the promise of Heaven hover over each and every one of these poems, but here are a couple of my favorites

That would be bread.
That would be a table.
This would be death, but it moves
Only one way;
And so the bread escapes,
And the table along with it,
Easily—as easily
As water spilling from a cup
All over the ground.

Now that I come to it,
Why agree to it?
Every quarter of the wind is bread.
Every blade of grass is a table.
We are walking beside deer through a halo.

The mountains are nude
But not cold.

I shiver.
I believe in death
Now that death believes in me.

What I find both moving and fresh about this collection is that it handles its subject matter with a simultaneous severity and lightness. It is quite clear in this collection that poetry, for Revell, if not prayer itself, is certainly composed of the same stuff. That being said, we never perceive even the slightest hint of didacticism, nor does Revell take hiimself too seriously in these poems. This balance keeps the work buoyant despite its deep subject matter. Also working in Revell's favor is the fact that he is as concerned with joy and the blessing of providence as he is with shame and those "dark nights of the soul"—inevitable for any serious Christian. Says Revell:

As with eternal life and the love of God,
What makes actual human happiness
Nearly unbearable is its reality,
Its mass.
(A PAINTING OF CEZANNE'S, p. 36)

If anything can convince us of this, it's "The Bitter Withy."

***
Poet, translator and critic Donald Revell has authored ten previous collections of poetry. Winner of a 2008 NEA Translation Award, the 2004 Lenore Marshall Award and two-time winner of the PEN Center USA Award in Poetry, Revell has also received fellowships from the NEA and the Ingram Merrill and Guggenheim Foundations. He is Poetry Editor of the Colorado Review.