Eating Her Wedding Dress: A Collection of Clothing Poems 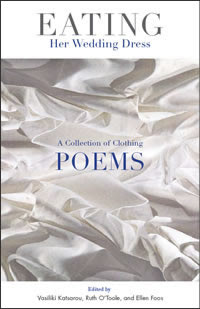 Clothes are the poems that we wear. The billowing skirts, sculpted suits, and scruffy t-shirts in which we parade around tell even the slightly attentive observer about our histories, our hang-ups, and our lies. The subject of costume’s power, universal and unchecked, struck the mother lode with Maxine Kumin, Paul Muldoon, Margaret Atwood, Billy Collins, and nearly one hundred more accomplished poets, who contributed to a new anthology from Raggedy Sky Press called Eating Her Wedding Dress: A Collection of Clothing Poems. In their allotted pages, these writers explore the meaning of dress as symbol, history, and personal fate. They do so with a wit and wisdom that makes usually bitter truth telling palatable.

Only the dullards among us read costume literally, as Janis Butler Holm proves in a delightfully humorous piece called “If Paris Hilton Wrote Poetry” that reads like this:

The rest of us are all disturbed by the dissonance between what clothes promise and what they deliver. “Living in Bodies” by Claire Zoghb reminds us that the hospital gown, with its “… single knot/at the nape” … “was sewn/to survive only so many/washings, so much bleach.” Diane Elayne Dees, for her part, reads the message young girls might not see in designs borrowed from the military. “In my dark visions,” she worries, “pre-teens slog through the desert/in Little Mermaid combat boots,/ … they load theirM-16s.”

Some accessories and undergarments are examined here as pure symbols. The “thin black ribbon/of customary bombazine” is a “badge of ruin” for the husband and wife who sit shiva for their child in Daniel A. Harris’ “Attire.” The double entendre of Mary Langer Thompson’s “My First Pink Slip” suggests that being female might not be unrelated to being laid off.

Other pieces of clothing are symbolic on an historical scale. The “White Cotton T-Shirt” in Margaret Atwood’s poem exposes the disconnect between the costume of The Sixties flower children and its source. “It made its way to us from the war, but we didn’t know that,” she apologizes before admitting how this “vestment of summer” actually “had been washed in blood.” Maria Terrone’s “Unmentionable” recalls tragedy, too. “A frayed label says/Triangle Shirtwaist Company,” the speaker of this poem notices about the antique lingerie that lies in her drawer. It calls forth images of “smoke, locked doors and fiery dives,” as well as a final question: “Did she hang by a thread for days/to die, or survive...?”

A number of poets in this anthology find whole chapters of their lives woven into the clothes that have been left behind. James Richardson’s “Family of Ties” always are “…Listening at the backs of doors, frozen/against the walls of closets.” The silky strands might be remembered as disguises that have been cast off, but then, one is slipped beneath a collar “…and we are dismayed,” notes the narrator, “to find that that they fit. Just when we thought/we had changed….”

In “How It Is,” Maxine Kumin portrays a woman in mourning who uses a piece of clothing to renew contact with a deceased life partner. She dons his jacket, searches the pockets, discovers a hole, a ticket stub. “My skin presses your old outline,” she tells the absent loved one. “It is hot and dry inside.” The notion that she might have saved him occupies one stanza, but finally there is unwilling acceptance of the loss. “I will be years gathering up our words,” she admits from inside “the dumb blue blazer of your death.”


For Maxine Susman’s empty nester, clothes represent both a loss and a rite of passage as she watches her son “Packing for College.” Her ambivalence would ring true with any mother:

Part of me says I’ll do your clothes

Forever if you’ll stay with us. Part says

Here’s your own jug of detergent….

It pains this woman to see that, “What seemed a closetful of everything/squeezes into one bulging duffel.” Susman leaves her in the semi-emptied bedroom to contemplate the loosening of her maternal attachment, “… the come and go between us.”

Dresses of all colors – little black, red, white wedding – frequent this volume’s poems about women. The writers are leery of the power of frocks and gowns to which their female narrators frequently submit. In “The Blue Dress,” Deirdre Brennan considers Henri Matisse’s intention toward a female subject, whom he paints in “voluminous sleeves/and rhapsody of frills….” The writer concludes,

He had to hate her to paint her

To cancel her out, imprison her

Within great folds of cloth.

Lynn Wagner casts “The Little Black Dress” as a suspicious bitch that takes over one woman’s life. Anthropomorphized, this iconic piece of clothing “goes to cocktail parties” where it “titters and flirts” until “Anyman takes her home/ … in his red sports car.” The next morning, the costume is cast off, and its wearer finds herself calmed by the night out. The little black dress might have been in charge of the evening, but the narrator did not object. The poem leaves her with “voices quiet,” suggesting that, while wearing the sheath, she could act out her fantasies.

The wedding gown is seen as the most insidious of all the clothing culprits. For Lynn Emanuel, “The White Dress” is a “shroud/on a hanger” and “an eczema/of sequins.” Like the little black number, the white one has a plan of its own. It waits, “lonely, locked up/in the closet” to take possession of the “bouquet of a woman’s body.”

In the title poem, “Eating Her Wedding Dress,” Eileen Malone examines this ritual garb through the eyes of a spinster at her baby sister’s nuptial feast. The ceremony is over, and the young woman’s gown rests on a chair where “delicious damp fingerprints” sprout mushrooms on its velvet. The spinster sister devours it:

I release my tongue, lick salt

sliding all denial and neglect

down my slippery throat"

The older woman is conscious of seeming the “old hag” but decides, “—no matter, I no longer fear/I might be what I seem.”

A collection of poems about clothes would not be complete without a tribute to their opposite, nakedness. Billy Collins provides one called “Taking Off Emily Dickinson’s Clothes,” in which he meticulously records the disrobement of the author unlucky enough to be bound by 19th Century fashion. “…I proceeded like a polar explorer/” his narrator reports, “through clips, clasps, and moorings/ … Sailing toward the iceberg of her nakedness.” The journey leads, naturally, to both sex and danger embodied in the sigh Emily heaves when her last hook is loosened. To make sure we understand the risk the poetess has taken by discarding the feminine uniform of her times, Collins immediately shifts her wonder back to his readers, reminding them that he also has heard them sigh …

that Hope has feathers

that life is a loaded gun

that looks right at you with a yellow eye.

But if one can get past the threat, the loss, the personal shame that clothing carries, one might, as Anca Vlasopolos suggests in “Loosed Garments,” find solace in one’s wardrobe. Annoyed by “zippers become perverse/and buttons … out of reach of loop,” her narrator, definitely a mature woman, probes the depths of her closet to find something she might wear. During the search, she discovers things cast off, “an old silk shirt/…shining/like polished silver” and “an outfit you’d forgotten/…sending sparks.” She tries these items on and finds they fit “like skin,” so “your girth now seems/positively svelte.” Comfortable with a somewhat fuller figure that suits her full life, she opts for a flowing outfit and finds that it gives her wings.

The varied takes on clothing in Eating Her Wedding Dress will send many readers scurrying to their own closets to discover what material, for poetry and for life, lies buried there. The truths told in this volume surely will enrich the search.

Writer and journalist Jane Dobija is best known for her reports for NPR from Warsaw during the last Polish revolution. She is the editor of Corridors Magazine (www.corridorsmagazine.org) and is at work on a novel about Poland called In Solidarity.