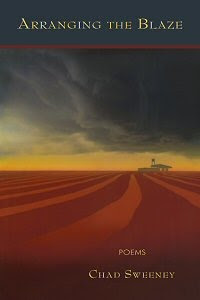 Chad Sweeney’s recent collection, Arranging the Blaze, offers a harrowing yet hopeful view of life in the 21st century. With keen perception, seamless shifts in tone, musicality, and figures at once precise and expansive, Sweeney probes the individual’s attempt to structure and sustain a sane and grounded life in a world rife with injustice and hypocrisy. And whether Sweeny addresses history, tradition, work, faith, identity, or concerns about the future of the planet, he does so while exploring the power of language to tell and to heal.
Nowhere is this more apparent than in the short lyric “White” which serves as a map for poems to follow. Consider: “The foam of the sea is white // gypsum scowling the hillside, / the sun-bleached bones of crows.” Here we see land ravaged by mining, loss of habitat and life– not a pretty picture, yet the speaker quickly alerts us to the issue’s complexity: “White is neither yes nor no.” Perhaps the speaker intends to calm us, but only briefly, as he soon commands: “Look at the rim of your thumbnail,” suggesting we have had a hand in what has happened to our planet. Finally, “White is not kind. / Look at the cotton opening its seed.” The image recalls the numbing work of slaves, the stubbornness of racism, but also opens the possibility for growth and change.
Many poems in the collection bridge the personal and the universal. The long poem, “Genealogy,” offers not only a fine example, but also a clear sense of Sweeney’s breadth and technique. In the first two tercets, Sweeney grounds us in his experience:

Along the streets
the candelabra
in amber points of sun

reflected,
Car glass, arc-of-roof, antenna.
It is in me.

In line three, the echo of “ America The Beautiful,” foretells the poem’s direction. We soon learn of incidents troubling to the speaker’s family, incidents that impact the speaker still. The incantatory refrain, “It is in me,” works to sweep us into the speaker’s observations. Here, they reflect on faith:
Mother before she was my mother,
Sherryl hung
By her knees from the redbud tree

allowing the white Sunday
dress to flow over her head,
allowing

her hair scented with lye and faith
to comb patterns in the dust,
recording the day upside down.

Upside down, Sherryl sees “the smart white house of Mary’s father, who emerged in his Sabbath “black to cast / a look of such contempt // and hurry his daughters into the car.” She feels shame that stings into adulthood, and the speaker again intones “It is in me.”
In the stanzas that follow, the speaker shifts locale, first to the natural world, where he observes “Color roots spoke to turtle eggs // and asks, “Is it jade? Is it flint? / Did waves grind it / in a mill? It is in me,” then back to family, his grandfather’s death in a tractor accident, his father leaping “down from that tractor / to bury his own // boyhood, eleven years old and Irish, / fatherless, godless, barefooted boy[…,]” and finally to the role of art and language in human history. Celebrating his heritage as a maker, Sweeney recalls “the first hand to blend / pollen and clay against the cave wall, / mother //of Lilith, Harjo and Levertov, / mother of jasmine clutching at cliff ledge. “
Other poems that explore the evolution of humans as makers are “The Welders,” and “The Arc of Intention.” “The Welders” places the reader in Black Rock Desert, Nevada, where the speaker watches welders build a carousel. In tercets built with short lines and startling images, Sweeney creates the sense of physical strain, allows us to taste the grit – the welders, “angular on one knee, atop a ladder, amidst flame and their own private cloud // of dust or smoke.” By placing the enjambment after “cloud,” Sweeney alters the pattern of intonation and stress, thus stretching meaning. The poem’s speaker sees the welders as “magicians” who use their skills to forge connections. The speaker reminds us such connections have sustained us “wherever theory / or bone // needed binding.” Examples follow: “iron / among malachite, / Irish among their dead.” Iron must be extracted from malachite to be useful. People must be rooted in culture to survive and thrive. But there are costs.

scars beneath the breasts
where the coal train crosses.

As in “White,” we observe the scars to land and people. End-stopping the line with “crosses,” intensifies the word and raises the specter of burial, a subtle reminder to care for our land even as we use it, and to care for the people who work it. The speaker continues:
Civilization
depends on this,
this math
at the wrist, at the mouth.

Yes. Civilization depends on problem solving to build connections, be they “math” at the wrist as in welding, or “math” at the mouth, as in language. The cadence of this striking metaphor returns the reader to the welders, “laughing now”/ […] holding the cold beer // against the vein in their neck.” The carousel is built and running. The poem is finished.
In “The Arc of Intention,” the speaker shares insights gleaned from leading a San Francisco poetry workshop for youth from Central America, many of whom have likely known the trauma of war. In a series of melodic couplets built of clipped lines, some with only one word, we join the students in acts of naming, in the joy and challenge of articulating the world in a new tongue. The students write, “fixing the light of their gaze // inward / where the pencil is a scorpion, // a storm, / a glove. ” Again Sweeney contemplates the insubstantiality of language, the way a word has no reality beyond itself, yet insubstantial as it is, the word enables us to name our world. As the poem moves forward, we find the students at the windows observing freighters in the bay, gulls–
[… ] to name
this world with the awkward
words, the borrowed words,

yet they are naming,
and through the windows the city

The speaker tells us “they try on the new // syllables like oversized robes, /
some soldier’s lost boot,” as they let go of an old life and prepare themselves to negotiate what lies ahead.
In this way the words are tamed,
even loved, […]

Everywhere in “The Arc of Intention,” we find the joy of language– in the experience shared, and in the poet’s skill to tune and love the word.
“Dolores Park,” a San Francisco landmark, is the setting for one of this collections most complex poems. With diverse poetic strategies -- Whitmanesque anaphora set against one word lines, neologisms, oblique reference to writing, and playful spacing-- Sweeney propels the poem toward hymn. In so doing, he gives voice to the microcosm of the world that is San Francisco:
“Dolores street leaps from its map a living thing
crossed, relined, alert or livid eye,
Leading Tierra del Fuego to New York, barefoot and tired,
Old Man Road–

The poem’s speaker observes people on the grass, the grass itself:

As the speaker moves us through the poem, we find each space reflects on the human

crisis below the image. So too does each word define experience for the people who inhabit “Dolores Park.” The poem continues with the speaker repeating small words as if awestruck:
The palm trees toe their hill
and now and now: and: and: now is: and: and memory tree
and material tree: each of a weight:
and the church tower says forever above the butterflies
and the street erupts from ideal and real equally
and cars grind up the hill against the chains[…]

Under the grinding of the cable cars, the poet-speaker reflects on his world, on the

made thing, and his own place in the cosmos. The final stanza brings us to the close of day:

After work, the hour of dogs:
a beagle hunts the tennis ball with original glee,
all else dim beyond that wet star:
life as composition in drafts, approximations […]

While “Dolores Park,” celebrates the word and the world, the poem closes with a stark image of the risk faced by our planet and its inhabitants. The speaker rests on the grass, observes the city, “in weightless ideal / in line and dome / like history to the safe, / soft as thistledown, / the bombs falling quietly into a summer dusk.” This poem is at once leisurely and urgent, joyous and disquieting, as is this fine collection.
What ultimately makes this book a must read is Sweeney’s ability to make us care about the private and public challenges of our time. And with exacting craftsmanship, Sweeney gives us pleasure as he speaks to our concerns. Both technically and imaginatively, there is nothing cautious about “Arranging The Blaze.” In taking risks to achieve a fusion of form, tone, and meaning, Chad Sweeney gives us a finely wrought analogue for the natural and human world of the 21st century.

Chad Sweeney is the author of three books of poetry, Parable of Hide and Seek (Alice James, 2010), Arranging the Blaze (Anhinga, 2009), and An Architecture (BlazeVOX, 2007) and the chapbook A Mirror to Shatter the Hammer (Tarpaulin Sky, 2006) -- as well as the editor of Days I Moved Through Ordinary Sounds: The Teachers of WritersCorps in Poetry and Prose (City Lights, 2009) and coeditor of the journal of poetry and translation, Parthenon West Review. Sweeney’s work has appeared in Best American Poetry 2008, Crazyhorse, New American Writing, Colorado Review, Black Warrior, Barrow Street, Runes, Verse, Volt, Passages North, American Letters & Commentary, and elsewhere. He is working toward a Ph.D. in literature at Western Michigan University, where he teaches poetry and serves as assistant editor of New Issues Press. He lives in Kalamazoo with his wife, the poet Jennifer K. Sweeney.