Star in the Eye 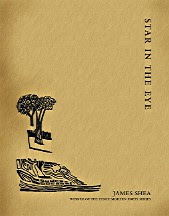 James Shea’s first book of poems, Star in the Eye, has lots of lines that cross the wires of proverb and punchline. Sometimes, such lines come without context, like the bumper stickers of an odd sect: “Easy to cross the river if you are part river,” says one section of “Dream Trial.” Another: “I am the opposite of a solipsist.”

More often, such announcements accrete, forming coherent scenes from declarative statements that have discrete integrity. The leaps between such statements can be excitingly large—“That’s the remarkable thing about me. / I am not a hawk that can swim” (“Runaway Model”)—but Shea’s voice stays steady, moving through propositions with clipped glibness.

Despite its cleverness, this voice is less cheeky than thorough-going and frank, suited for the poems’ strange and necessary labors. “You are the performance artist / who charges people to leave,” begins “Around the Wind.” In fourteen lines, this poem has the speaker landing a plane on that you’s street, a distance it’d be hard to traverse without Shea’s gift for bursting across surfaces.

Many poems in the collection have similar catapulting starts, jolting forward from an initial scenario or problem: “I just realized my recent error: no space/time” (“The Yellowstone Revolution”); “I dropped my soulish thingy in the parking lot” (“Runaway Model”); “You are not free to enjoy the nostalgia” (“Panopolies”).

Frequently, the sequential statements that follow are stitched together with startling and restrained pathos. “I live once supposedly,” concludes “Mechanical Foliage,” one of many poignant sentiments Shea delivers with the flatness of transcribed song lyrics. In the book’s opening poem, this approach makes cartoonish elements feel harrowing:

They gave me surgery on my mouth.
My eyes were packed with feathers,
and my whole face was painted flat.
An expert told me I was probably a joke.

Elsewhere, Shea’s pieces show off their seams more, serving less as translations of pseudo-linear monologues than as compilations of linked utterance. “Storms,” for example, seems written by a language student whose only fluency is phrasal, evoking the book’s frequent themes of language study and travel (“The yukata is beautiful. / These are eggs. Those are eggs. / Who is that girl? This is / my bike.”). In “Haiku,” Shea makes a self-portrait out of potential haiku titles.

Upon Kissing You After You Vomited.
Upon Walking You Home and You Pissing
in Your Pants. Upon Asking a Complete Stranger
about Our Situation. Upon Reading Issa’s
Prescripts “Issa in a State of Illness,”
“At Being Bewildered on Waking” and Realizing
the Haiku Poets Were Not So Laconic and How
Could They Be?

Such conceits are fun, though I’m most impressed by the poems that use accumulating compression to stab with mischievous, imagistic clarity, not just create continuity or collage. The forty-five short poems in “The Riverbed” do this with dazzling range and scope; I wish they were printed on coins.

Gathered along the riverbed,
She walked among us
Like a cameraman
At a wedding.

Riverbed on a Leash

The leash moves
Around the sitting dog.

A child made a riverbed
Out of paper.
Then he laid it
On the river.

After the movie
About riverbeds,
You said, I wonder
What it would be like
To be married.
I said, Yes!

The humor in Shea’s collection makes you cock your head, not guffaw. Continually starting and stopping, the morsels of this long poem—I’m tempted to quote many more—have a measured pace, highlighting how clipped statements, for Shea, are less quirky sloganeering than expressions of his willingness to be dumbstruck. In mixing reticence and exuberance, his tone is pleasantly odd, but not at odds with tenderness and awe; it conveys an amped-up sense of earnestly “defending everything from everything else” (“Idea of a Mutiny”).

Without such earnestness, it’d be easy for a poet with Shea’s ear and wit to be a sort of solipsist, entertaining us with an off-kilter interior view, but, being the opposite of a solipsist, Shea uses these techniques to express old fashioned emotions in original ways. In “Poem,” for example, we see self-consciousness blossom into self-awareness as Shea considers “how the world protrudes out at one:”

water carries a ship, but I was happy
I saw him and this contradiction

saddened me, but I was pleased with myself
for having noticed it.

The self, in Shea’s poems, is composed as it speaks (“Whoa, I said, you hear everything you say,” concludes “University of Air”). Such composition requires slapdash improvisation but also has high stakes for its language—I love Shea’s subtle mulling of phrasing, such as in a section of “Dream Trial” that says, in its entirety “No, no, it’s alright. // Hey, no—it’s alright,” reminding me of Frost’s experiments with sentence tones. The difference between those two statements is enormous. Attentive to how tones grind against each other, Shea helps us hear it, and stop, but not be stopped by it; his is a minimalism unafraid of wordiness, that doesn’t collapse on itself but folds into an origami boat that floats on to further observations and memorable lines. For many poets, such lines occur only at the beginnings and ends of poems; you wander between them waiting for the rhetorical microwave to ding and say you’re done. Shea constructs an entire book out of them.

A graduate of the Iowa Writers’ Workshop, James Shea teaches at Columbia College Chicago and DePaul University. His poems have appeared in journals such as jubilat, The Canary, American Letters and Commentary, and Columbia Poetry Review.