DEAR FRIENDS OF THE CANARY

Also new are some features to our expanding website: www.thecanary.org

You can now click on each issue’s number to see who contributed; and you may purchase copies or subscribe at the new order page. Bulk orders for any sort of educational purposes are available at cost, just e-mail us at: info@thecanary.org

In about a month, we’ll begin a Close Reading page at which a few poems from the current issue will meet with their readers’ prose.

Your support is invaluable to our little magazine, so please keep it coming and tell your friends about us. Thanks!


* P.S. Congratulations to Danielle Pafunda, whose poem “Small Town Rocker,” from The Canary #4, will appear in Best American Poetry 2006, and to by Amanda Nadelberg, whose work from #5 will be featured on Poetry Daily, on April 1.
Posted by CutBank at 7:59 PM 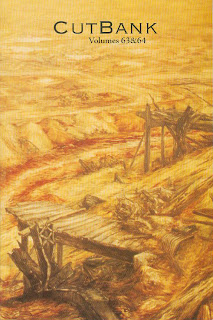 The Gales by Ryan Murphy


The poems in Ryan Murphy’s chapbook The Gales are very quiet and fragile, cleverly turning words and phrases like haiku that unravels itself down the light blue page. I choose “haiku” for comparison here because these poems are inherently Japanese, calling on a character named Kinoko, fourth-generation Japanese-American figure skater, Kristy Yamaguchi, Nintendo, and eating jello with chopsticks. The chapbooks last line reads, “Sincerely, Hokusai,” which perhaps sets these poems on the shores of Hokusai’s The Great Wave, a widely known Japanese woodblock painting of a large blue wave curling over itself toward land. Murphy certainly dips into the same perfectly-off color palette as Hokusai when he paints the trees that “stain/the edges of the afternoon” blue. These poems also belong on that shore because Murphy is calling for “the gales” to usher in a storm to stir the lonely silences. In “City of the Big Bang”:

First the wish for rain
in humidity
then rain and hail

and in a few other poems, Hurricane Isabelle “works up the coast/coastal flooding, property damage.”

In “Florescent Flowers”, all of the narrator’s (and Kinoko’s) activities are quiet and fragile until he is caught, at the poem’s end, in a different kind of storm:

There are few who sleep as I do
in the Metropolitan Museum.

Kinoko, you and I
standing on the Bow bridge
dressed in the purple of nightfall.

Kinoko, you and I
shaving our legs before the swim-meet.

Fluorescence floral –
It has begun to February


The first calligraphic pen-stroke
revealed the error of my ways.

Drunk, Theraflu, passing through
the pale blue snow of television.

If it were legal for Japanese storms, like tsunami’s, to marry Baseball, The Gales would be in that short line outside the courthouse. The spouses of this arrangement would not be completely foreign to one another—baseball is the national sport of Japan, though the heart of his chapbook “from Poems for Pitchers” is, interestingly, nearly the only poem explicitly un-Japanese. But there is a poem for a Jew, an African-American, a Cuban Socialist, an infamous overweight spit-baller, and Charlie Hough (Sandy Koufax, Dontrelle Willis, Fidel Castro, Gaylord Perry, and Charlie Hough).

The opulent ruin of rotation
The pure delivery, the mechanism of
Hurricane Isabel

And again, at the end of The Gales’ first poem, Murphy uses a wave (you should imagine Hokusai’s), a concept attached to both storms and baseball. Both varieties begin very small and very quietly:

A wave is not The Wave
when you’re the only one standing.

Like the wave, Murphy is the only one standing here, completely alone, beckoning the crowd and the sea to stand up and take action. In fact, Murphy conveys loneliness in all these poems because The Gales is written much like a letter (which itself is often a product of solitude) from the painter of The Great Wave, with its cold sea water and cold sky and absence of people or even houses, and as a letter partly to baseball pitchers, famous and dead strangers, which receives no reply. Without the promise of a wave (the baseball or storm variety) there is no cure for Murphy’s loneliness. He writes, even “too much time alone is also lonely.”

RYAN MURPHY is the author of Down With The Ship (Seismicity Editions 2006), and is the recipient of a Chelsea Magazine Award for Poetry. His poems have appeared in The Denver Quarterly, The Paris Review, and other publications. He lives in New York.

ZACHARY SCHOMBURG other reviews can be read at Octopus Magazine. His most recent poems are forthcoming in Typo, Washington Square Review, Same Storm, Action Yes, Parakeet, CutBank, and The Hat. His chapbook, Abraham Lincoln Death Scene will be published by Horse Less Press in late 2006. He is currently a Creative Writing PhD student in Lincoln, NE, where he lives in a tiny home with A, M, S, and G.
Posted by CutBank at 10:23 AM 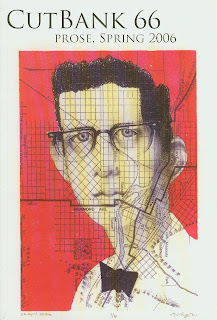 
Copies are available for USD $10.00. Checks can be made payable to “CutBank" and sent to: CutBank, Attn: Prose 66 Order, Department of English, University of Montana, Missoula, MT 59812.
Posted by CutBank at 1:53 PM