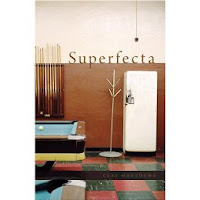 Ghost Road Press, 2008
Reviewed by Joshua Robbins
Every so often one comes across a first book of poems that radically shirks off the normative first book formula which says, “This profound stuff happened to me and I’m going to tell you what it means.” More often than not, the product of the first book equation is a poetry that meets our expectations (however low they may be), but fails to address the urgency of our times. Thankfully we have Clay Matthews’s first full-length collection, Superfecta, to prod and admonish us, to remind us that poetry can have something to say in the face of American vulnerability, mortality, late capitalism, ubiquitous pop-culture clutter, and urban sprawl. And for readers willing to risk betting even just a little time and effort, the payoff they receive will far exceed their meager investment.
For Matthews, who has previously published two chapbooks, Muffler (H_NGM_N B_ _KS) and Western Reruns (End & Shelf Books), the concept of a payoff is integral to the arc of his book, the title of which is derived from the world of parimutuel horse race betting. When betting the superfecta, the bettor must successfully predict the order of the first four finishers in a race. Picking a successful superfecta involves complex combinations and sequences at long odds. The winnings, though, are correspondingly much higher. The same goes for our experience of these poems.
For an epigraph, Matthews quotes from Emily Dickinson’s #254:

While hope is certainly a theme for Matthews, reading poems like “Poem with a Forecast at Either End,” “Self Help for the Lost and Found,” and “The Prayer Mechanism” among others, one recalls Dickinson’s other famous words, “Poetry dwells in possibility.” Sometimes these poems harness the potential of narrative and the saving grace of memory. Sometimes it’s landscape and place. Other times these poems express what feels like a renewed religious faith struggling with what remains of doubt. Consider these closing lines from “Eternia”:

I'm lonesome sometimes
again. I've been coughing up the evils of the universe
in the sink and watched once more the other night that movie
about He-Man. Look at that name. What a strange film
there is covering the window. It looks like everything
outside is blanketed with the saddest glass in the world.

In the phrase “the saddest glass in the world,” there are faint echoes of Biblical scripture and the Apostle Paul’s statement, “For now we see through a glass, darkly.” Matthews’s spirit seems equally sanguine and forward-looking — though doused with a heavyheartedness as he surveys the world.
Matthews’s poems possess a unique melancholy in which the trappings of America’s tradition of optimism are juxtaposed with imagery from America’s cultural clutter. This is a place where the individual’s voice becomes “nothing more / than a warm little praying machine” (“The Prayer Mechanism”). It is the place where video game arcades and “Two-hundred Pac-Man machines / with hundreds of three-letter initials” call into question “the essence of [the] subjective self” (Self-Portrait in a Chewing Gum Wrapper”), and even the DeLorean from the film Back to the Future compels us to wonder if we should “try to save the world or just try / to save ourselves” (“Self-Portrait in a Hollywood Car”).
Referencing pop-culture icons and even brand names has become a fairly fashionable tool in recent years for poets seeking to rough-up their listless imagery or to inject an ironic sensibility into their lyric. Very often these poems feel contrived. What enables Matthews to avoid sounding like a phony is that his allusions to pop-culture are connected to more pressing existential concerns. Here is the opening of “Mercy Mild”:

At the supercenter we were waiting
for the big televisions to go on sale,
which is to say we were waiting
for a larger version of The Price is Right,
in full color and spread across the screen
the way Antarctica stretches across
the bottom of the globe like a pair
of tight white underwear, the kind
my father used to wear in the bathroom
when he shaved his face each morning
and banged the razor rhythmically
on the side of the porcelain bowl.

In these opening twelve lines, we encounter several things we don’t normally expect to come across in poems: the supercenter, The Price is Right, Antarctica, a man’s tighty-whities. Also, it should be noted that we hear a nearly regular accentual beat. Aside from his highly crafted line, Matthews’s progression from the supercenter into memory is not necessarily poetically surprising in its movement. It does, however, allow him to tackle the bigger issues, to call into question the relationship between the self and commerce, the self and memory, the self and place, because “In the supercenter there are three versions of reality” and supercenters themselves “are no version / of reality, [they are] only an image of reality.”
Matthews’s work is refreshing because of its honest voice and his willingness to confess simple facts: that we all hope for “another day of absolutely nothing better to do” (“Self-Portrait as an Aging Human Type”); that in something as simple as a pickle jar “you see / every greed you have ever possessed / or been possessed by” (“Regarding My Sentimentality and Love of Hole-in-the-Walls”); that any kind of bet “is just another structure tugging away at our sad existence” because

Asking the American
middle class not to gamble is like asking us
not to breathe, to place our small, tired hands
over our hearts as some young girl in white sequins
over-sings the national anthem to which at least one
old man in the crowd will weep.
(“Elegy for a Bet that Couldn’t Lose”)

Many of the poems in Superfecta stayed with me, their images reverberating in my consciousness long after I’d set the book down. With their complex tones and the mixture of pop-culture, the honesty of Matthews’s voice, his attention to the details of the everyday, the poems in Superfecta oblige us “To bet on what we believe won't happen, / but hope for / nonetheless” (“Elegy for a Bet that Couldn’t Lose”). Clay Matthews is certainly a poet to put some money on.
***
Clay Matthews is the author of Superfecta and two chapbooks: Muffler (H_NGM_N B_ _KS) and Western Reruns (End & Shelf Books). He currently lives in Johnson City, Tennessee. Visit his blog at http://claymatthews.blogspot.com.

***
Joshua Robbins received his MFA from the University of Oregon and is currently a doctoral student and lecturer at the University of Tennessee where he serves as Poetry Editor for Grist: The Journal for Writers. A winner of the James Wright Poetry Award, his work has recently appeared or is forthcoming in Mid-American Review, New South, Borderlands: Texas Poetry Review, the anthology Writing By Ear, and elsewhere. Visit his blog at http://againstoblivion.blogspot.com.

Copies are available here.
Posted by CutBank at 11:10 PM