Surviving in the Flickering Lights of a Spiritual Quest:

Things On Which I've Stumbled 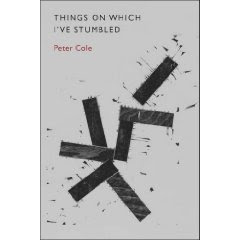 Making the desert empty. Bloom, purging soil. As though it needed a little
more room. All the toil, come from countries: “Waste not, want not” once
its pride. Now its eyes for the world are wide. And nothing it does upsets
us. There’s no apartheid in its midst. There’s no lie, we need the fence….
Wandering though the land like Christ. Take that village along the ridge.
Who on earth could bring it help? Ethnic cleansing, Scripture says. Slowly
but surely. Staying strong is hardly wrong; our forces do what must be
done. Nothing that they do is fun. Living along this seam. Where is, in fact
is what it seems. If you will it, said the prophet. It is not a dream.
(From “What Has Been Prepared, Part III: What Intimation Is There,” 80)


Reading Peter Cole’s memorable poetry volume, Things On Which I’ve Stumbled, with the assault on Gaza raging, is an emotionally charged and revealing experience. Dense, coherent, confessional, and prophetic, his writings explore an archeology of mystical fragments, from poetry manuscripts unearthed in an old Egyptian synagogue to uncensored personal thoughts and observations about the political plight of modern Jerusalem. Even the arresting book cover — a Joel Shapiro woodcut of a disjointed black swastika — is in itself a telling political commentary. Indeed, writing about the identity of a nation and people in the context of Jerusalem and Palestine is both sacred and political, as demonstrated in this concise poem now oft cited and remembered:

Israel is he, or she, who wrestles
with God — call him what you will,

not some goon (with a rabbi and gun)
in a pre-fab home on a biblical hill.

Most of the poems in this collection are allegorical and meditative. Often, the titles are illustrative. Consider these: “The Ghazal of What He Sees,” “Proverbial Drawing: How Far, A Right Angle Supports Us Here, The Line, It’s True, The House The Cloud, The Wrong Angle Righted,” “The Ghazal of What Hurt.” From open-form lyrics and sestinas to ghazals, lineated prose, and prose-poems, the variety of forms and modes in this collection is both refined and rich. Cole has boldly incorporated an Arabic cadence into his well-composed English syntax, sometimes seeking more of a musical cadence than a strict adherence to metric feet in his prosodic eloquence. Much of the twenty-three-page title poem, “Things on Which I’ve Stumbled,” for instance, contains a visible architectural elegance and clarity that renders an incantatory touch to parallel words and refrains, as well as illuminating blank but breathing spaces:

These are things I could not fathom,

and how what is fine
and wine

could be crushed by a blindness

Tell me, what is man
If not dirt and a worm,

his life is only vapor…

caused by a brightness

Tell me what man is
but flesh and blood that’s warm,

of what it is

Despite their experimental forms, all of the poems are clear and accessible in their messages, paying close attention to linguistic nuances and techniques. Cole creates a range of lyrical episodes, either expressing a single narrative voice or a multivocality in which voices from different time periods intersect. I found many lines irresistibly ludic yet resonating, despite their seeming simplicity:

No! It’s all in the picture,
which this one echoes:

In the poem “Why Does the World Out There Seem,” the poet states, “Poems, as Williams wrote, are machines.” Peter Cole joins the ranks of poets such as Paul Celan, Allen Ginsberg and Bei Dao who articulate serious questions about the place of poetry in a darkened and dubious world. Things On Which I’ve Stumbled asserts a union between language and meaning in the context of a specific culture. What stands out clear to me is that one cannot read this volume without acknowledging its moral seriousness, its historical and cultural references. While savoring their many and layered musics, I have also enjoyed the verses as a combination of Cole’s emotional and intellectual responses, whether as poet or translator.

An acclaimed translator of Hebrew and Arabic poetry, Peter Cole’s previous volumes of poems are compiled in What Is Doubled: Poems 1981-1998. His several translations from the Hebrew and Arabic include poetry by Taha Muhammad Ali, Aharon Shabtai, Yoel Hoffmann, and others. Awards and fellowships include a PEN Translation Prize for Poetry, a TLS Translation Prize, a Guggenheim Foundation Fellowship and a MacArthur Foundation Fellowship. He lives in Jerusalem, and is co-editor of Ibis Editions.

The Usable Field by Jane Mead 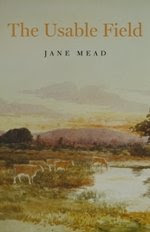 Alice James Books, 2008
Reviewed by Dora Malech
In Jane Mead’s latest collection of poems, The Usable Field, the field in question is not theoretical (not “open” nor “unified”) but physical and actual, a living and tangible landscape made of “vines and poppies,” “the dust and the grasses,” “grit on the wind,” “yellow thistle,” and “the far shore/and the cliffs beyond it.” This is as much a literal place on earth as it is a metaphorical one. The poems don’t concern themselves so much with theory, but with a more private kind of discourse, wrestling with selfhood, the dead, and the natural world that binds past and present generations together where “the vineyard/and the grave are one.” The poems in The Usable Field ground themselves in a particular landscape, a place that takes on a life of its own as it bears witness to the human cycles of loss and grief (with brief flashes of joy and agency) that occur within it. The poem “Sister Harvest Brother Blues” declares:

The main force is the usable field
or sun on the useless bunchgrass,—

alchemy that spells and spells us
just as the weather spells us
and the good earth field. . . .

If the book is engaging in a public conversation at all, it is simply finding a voice in the centuries-old conversation about the quiet, self-effacing power of the lyric poem (“I do not know much/about beauty,” the speaker says, “though//its consequences/are clearly great”) reaffirming the ways in which faithful meditations on the particular have the capacity to echo into the universe, the universal. These are “personal” poems, but they never rely on effusive sentimentality or voyeur-friendly “confessional” narrative. It is the language itself that feels personal, even hermetic, in the most positive—and physical—sense of the word. To me these poems build themselves around the reader in the act of reading, using language to create enclosures—but not defensive walls, by any means—in which to meditate on their beauties and burdens. This is a book that one must visit again and again, each time becoming more a part of the “us” that the alchemy and weather “spells and spells” throughout this quietly extraordinary collection.

The Usable Field is haunted, though the poet presents the dead as so much a part of the place that they seem like natural phenomena (as opposed to supernatural). In the first poem of the collection “The Dead, Leaning (in the Grasses and Beyond the Trenches,—Like Oaks)” Mead begins:

In the high and mighty grasses
the dead lean on the living
like nobody’s business,—

they think we are their mission.
Thus the rain, whereby they say
Now wash your eyes and pray.

Pray for anything but forgiveness.

Again and again, the dead appear; the speaker tends to them as she tends to the land itself, and to her poems. This burden seems to inform the making of stanzas and lines throughout the book, as “form” and “content” (for lack of better words) feel exhilaratingly inseparable. There is an intuitive sense of cadence and composition throughout, not “form” per se, but a definite formality, calling to mind Dickinson’s “formal feeling” that follows “great pain.” The repetitions and shifts of the natural world (wind, water, seasons) appear as anaphora and incantation, point and counterpoint, caesura and enjambment paired to ensure a reader’s careful navigation of syntactic possibility. The poem “Three Candles and a Bowerbird” seems to speak to the necessity of this kind of “intuitive formality”:

I do not know why
the three candles must sit
before this oval mirror,

In this poem, and indeed throughout the collection, Mead uses precise images as touchstones to explore the ineffable; even the most revelatory endings have an elliptical or gnomic quality as in “The Dead, Leaning (in the Grasses and Beyond the Trenches,—Like Oaks)” which ends with the lines: “if there is death between you/and the oak, there is no oak.” These koan-like endings feel like anchors; in their mystery they moor the reader with their declarative and definitive cadence, often pentameter and often iambic, though sometimes folded over two lines. The poem “We Take the Circus to Another Level—” ends “The odds, by definition, can’t conspire”; the poem “Three Candles and a Bowerbird” ends “And in the mirror/also, there is joy”; the poem “Point and Counterpoint in All Things” ends “. . . there is/a single blossom—called commence.”

Although death and grief seem to bind these poems to the land, the land also seems to provide the possibility of release, or at least a coming to terms. The collection ends with the declaration “Also, I am here of my own choosing” — the paradox of finding agency through tending and committing to a place of inherited sadness. The precision and vitality of language and image and thought and feeling throughout these poems reacquaints us with one of the age-old paradoxes of the lyric: the pleasure it gives a reader to linger in and return to a solitary and grievous place made of uncertainty.
**
Jane Mead is the author of two previous collections of poetry, House of Poured-Out Waters and The Lord and the General Din of the World. She has been awarded a Guggenheim Fellowship, A Completion Grant from the Lannan Foundation, and a Whiting Writer’s Award. For many years Poet-in-Residence at Wake Forest University, she now manages the family ranch in northern California and teaches occasionally.
**
Dora Malech's poems have been published or are forthcoming in American Letters & Commentary, Best New Poets, Denver Quarterly, The New Yorker, Poetry, The Yale Review, The Yale Anthology of Younger American Poetry, and elsewhere. She is currently a Teaching-Writing Fellow at Augustana College in Rock Island, Illinois.
Posted by CutBank at 1:33 PM