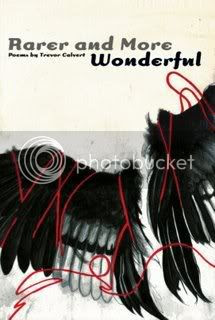 In the first of four serial poems that make up Trevor Calvert’s Rarer and More Wonderful, the poet begins by tricking the reader.  After a netherworld portrait (one anticipated by the gnashing black wings on the cover) of some winged and clandestine “She,” who quotes Paul Virilio, the reader must confront an abrupt apostrophic address:

Pull your arms about you, tighter

next.  We ask you to trust.

We ask that you find identity

with us.  We will be

To read on is to be implicated in every plural pronoun: to assume responsibility for a burning house, to be the voice of reason, to be the voice of chastisement, to be an advocate for robo-eroticism.  But, taking Virilio as a hint, perhaps Calvert uses the trickery, the oddness, the disorientation in order to implement frictional moments where poetry operates in resistance to the speed of modern living.  Nonetheless, finding oneself in what the poet calls a “Struck Landscape,” the reader learns quickly that orientation requires acquiescing to the cryptic, uncanny and haunting personae that inhabit this realm—part Underworld, part Nietzschean prison house.

Imagine a city as a sigil, an alphabet, and

I walked throughout the city and watched

as raccoons dived past grates and plants

uncurled in their gardens.  I swept the city

into myself and began to read.

Allegories of tunnels and leaf-blown asides.  Everything in its place:  a city

full of metaphor and order.  Unraveling the city, I did

not notice something, too, folding into me.

Following the poet’s “I” as a protean “You” the reader must navigate both the poetic landscape on the page and an imaginary landscape made of language.  The result is a kind of schizoid chronotope induced by a pathology of reading, where even the poet worries “that poetics were not enough” to enable a safe return to the role of passive reader.  But nevermind a safe return, read on.

While the first series enacts a kind of ventriloquism in which the reader is subsumed in the personae, in the second, aptly titled “The Morality of Puppets,” Calvert introduces Punch and Judy, the puppet faces of diabolical domesticity.  And if the reader has learned anything from the previous series it is to appreciate the slyness of the crafted poems, and to be on guard, even in moments of embedded reflexivity:

There is always a trick to language that invokes

secrecy, but inevitably evokes a sense of

In “The Morality of Puppets,” Calvert offers meditations and portrayals of Punch as the ultimate anti-metaphysician (again Nietzsche, plus Artaud):

His is one of

Calvert’s line-breaks work well and cleverly, precise in their reiteration of detail.  Precision also characterizes the inimitable, dark humour.  In one poem Punch plays Hamlet’s father.  Upon  misplacing his hat, Punch asks the guards where it is and decidedly

As the poet Graham Foust notes in his blurb, these poems are “aptly named.”  In the deceptively clipped lines and faceted stanzas, Calvert has shaped poems from fresh and unusual sources:  Continental philosophy and literature, Ancient Greek literature, Christian apocrypha, Japanese fashion, popular culture, cyberpunk aesthetics, New Age rhetoric, and Punch and Judy theatrics.  Such an eclectic mix leaves no shortness of surprises.

Like the previous two series, the third, “Probability Map,” offers no assurances.  Relying on a “Probability Map” is like believing that facts are truths—a point made thematic throughout this series.  Origins, systems, structures, worlds are all suspect and subject to the poet’s reconsiderations.

Cosmology, when observed, is likely

a poetics of relation and space.

A proper booster shot of postmodern thinking can fend off the symptoms of anti-foundationalism in these poems, but what disconcerts and pleasures equally are the moments of nonchalant syntaxes clicking against the erudite punnings.  In a poem called “Parabasis” the poet riddles

let’s move back to causes, a posteriori

Inevitably the juxtaposition of quips and the rich syntactics suggest a thorough schooling in the humour, craft and philosophical edge of Language poetics.

In the final series, Calvert offers “An Approach to Ending”—a coda, not an actual end.  In this—the shortest of the serials—readers will be keen to reading the secrets of how Rarer and More Wonderful is constructed:  poems that

something fierce and terrible and patient,

an idea we could not quite grasp.

In the opening poem of the sequence, the poet acknowledges the reader’s persistent experience of feeling on the verge of meaning, so often distracted by other, curious vectors:

some sense of determination

and exploration and how does

one begin to approach an end

to something when her only

compass is a feeling of lightness

sometimes at the base of the skull?

The experience of reading these poems resembles either intoxication or inoculation by some nepenthean elixir, what the poet calls a “tincture of an event.”  Sometimes the lines drop quickly in columns shaped like a syringe or sometimes they break like the brim of a good tumbler. One cannot simply read this book once, drawn back to it by the allure one might associate with an absinthe cocktail.  In fact, a kind of esoteric romance haunts these poems—edgy, dangerous, complex.  Being that this is Calvert’s first published full-length collection, and the first book by California’s Scrambler Books, readers have much to look forward to from the future of both.

Trevor Calvert is a writer, bookseller, and recent library school graduate living in Oakland, California. His poetry and reviews have been published in various journals and magazines, including Omnidawn Blog. His interests include puppets, vocabulary design, and martial arts.

Michael Roberson is a PhD candidate in English at the University of Calgary, where he also edits dandelion magazine.  His dissertation examines the role of ethics in post-Language poetry.