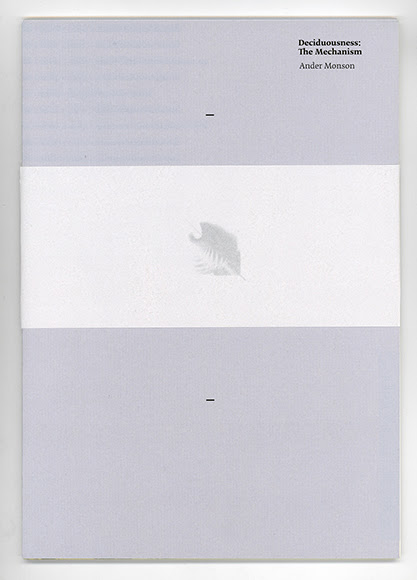 Here is a short review of a fiction and also of a press which blurs the line between book/journal and object and foregrounds the question of publication’s aims, its mediums, and the variety of audience which exist beyond the well-manicured and gated lawns of the commercial establishment(s). Both this fiction and this press defy the solidity of this establishment and its conventions, which are about numerical dominance, bookshelf oligarchy, and the un-bliss of the dull-mindedly repeatable. Ander Monson’s story, “Desiduousness: The Mechanism”, and its publisher, Ninth Letter, seek to escape, if not subvert, this state of affairs, and the result is a collaboration offering tremendous pleasure.

I selected this ‘book’ to review because I’ve admired Ander Monson from afar and wanted to more intimately enter a conversation with his work. Starting from that point, I was immediately taken with the sensation that “Deciduousness:A Mechanism” is decidedly fiction, happily and deeply and differently so. The book, bound by a velum, immediately falls into six four-panel folios, folded into comfortable sizes which allow the reader to hold them, gather them, and constantly experience them as the notes which are being collected in the hand, and the mind, of the story’s subject.

The design impact of this publication is everywhere on the story, and yet no more intrusive that the body is on our minds, giving us the sensations, the mise-en-scene, of living. Monson’s story sketches an indeterminate technological ‘Mechanism’, discernable only through the tattered notes written for the infirm, disabled mad-genius who may some day wake to its ominous presence. The narrative is tightly wound, or tightly unwinds, and proceeds with emotional precision. The notes which structure the confession of their author begin in handwriting, and are backed with screen-prints and digital imagery, numbered by hand and sliced with the arches of connections, meanings whose meanings have been lost and aren’t avoidable.

That the story and the book-form co-elaborate the story feels right and powerful as the reading advances – and reminded me in their constant interplay of the general poverty of the publishing convention which binds all stories into the same habitual gestures. Here it is possible to open and refold, to stack and sort, to gather and shuffle. The lacunae in the story reflect in the gaps between the folios, as they speak both to the loss of the present as it could be brought back by the past/memory – and also to how we must await the unknowable future. This future is only made of past actions in this story, as elsewhere, and this was the aspect of the story I found most compelling: the subversion of nostalgia into a form of hostility that pushes things we are not comfortable with out of our way in the present and into the future, which is also the past.

The quasi science fiction (and psychologically insightful) scenario of Monson’s story never resolves, though we sense in the protagonist the isolation of a Moreau, a similar foreign locale, and an almost unholy or at least profane, project. Monson’s language is lyrical, elliptical, emotional, and just descriptive enough of the elements of the environment (and of the Mechanism) so that we keep hold of it – the butterflies and optical cables, ducts and screens, which sustain the body of the story itself. Confusion over whose story “Deciduousness:A Mechanism” will ultimately be remains of interest, as the reader is put in the place of the hibernated consciousness, unsure what we will wake up for or to, and by the time the end comes, I had the eerie sense that what I know of my world has more been laid from the past (and possibly with an agenda) then seeming to drop in from the future, so that the present, ever impossible, contains nothing but the kind of light the Mechanism itself devours. I do not intend to offer narrative interpretations, for this is an open text in the best sense: both specific in its dramatic details, and inconclusive where the wrong answers would lead us off the right questions.

This is a love story, and it is a story of anger, bruised where passion was. The Mechanism of both turns out the same, and yet it is the technology which allows the character bound to it to live and see, to experience life and death. There’s something enormous wrapped in this short story, it stays like an afterimage in the imagination.

from the last folio: “What is on the other side I do not know. It could be the outside world, cold and blood all over it. It could lead to a thousand animals consuming each other. It might be the past. Or nothing. It could be hell. A dream of hell or just a dream. In my dream it is a thousand butterflies organizing themselves into comprehensible patterns, like city light, moving off the edge of the screen as we begin forgetting. It could be a beating heart. A psychedelic corridor.”

I wish more publications of fiction, poetry, and essay would embrace the values of this Ninth Letter collaboration with Ander Monson – that we would be able to satisfy ourselves with more hand-made objects and book forms which sacrifice the false promises of mass-consumption with the beauty of organic innovation in design. Even when the fiction might be imperfect or the design critiqued, this is so much the better conversation to be having – how writing and reading are multiform and of infinite variety.

Ander Monson draws from his life in Michigan, Illinois, Iowa, the Deep South, and Saudi Arabia. He has an MFA from the University of Alabama. He edits the magazine DIAGRAM and the New Michigan Press, and publishes widely. His novel in stories, Other Electricities, has been newly released by Sarabande Books.

Thalia Field's book BIRD LOVERS, BACKYARD is just out from New Directions (2010) as well as is a collaboration, A PRANK OF GEORGES (with Abigail Lang) (Essay Press, 2010). She is also the author of two other New Directions titles (INCARNATE:STORY MATERIAL, and POINT AND LINE) as well as ULULU (CLOWN SHRAPNEL) a novel from Coffee House Press. Thalia is on the faculty at Brown University's program in Literary Arts where she teaches courses for writers which often ask questions about storytelling on and off the page and across many too-hardened disciplines of method. 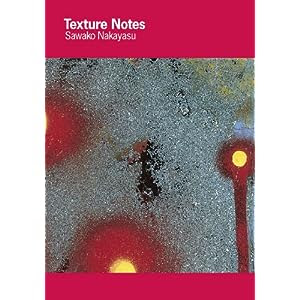