A Polyphonic Collage of Dream, Prayer, and Letter

For those seeking a pure or distinct narrative arc, Ardor, at first glance, seems to be a complicated reading enterprise. In an invented but dense structure that interweaves “dreams,” “prayers,” and “letters,” Karen An-hwei Lee has crafted an experimental aesthetic: an utterance. One that focuses on the limits of language. One that stretches the visual boundaries of images — real or surreal — testing the sonic depths of each of her chosen words.

Only one poem prevails throughout this book, though its three modes are in constant dialogue with one another. It opens with a lush, lyrical allusion to the love that Lee is about to unfold by borrowing references from nature and mathematics, the Christian religion, human and avian anatomy:

…
Calque alphabet
Modulation with avian equivalence of hands
Translation perched around a white rose
Photographic grapheme of cardioid delight
Water potential, a hidden sonnet whose
Permissible boundary of closed form
Is a sequence or open cycle in
A heart-shaped curve traced by a point
On the circumference of a circle rolling
Around an equal fixed circle, general equation
ρ = a(1 + cos θ) in polar coordinates
…

Here we see the overriding feature that we are to encounter for the rest of the book: each line contains at least one image. Occasionally an imperative, the line may break with a surprising twist. Always it reads with a rhythm that is hard to classify. Irregular? Syncopated? Yet it flows with a strong beat that seems to drive the voice somewhere else. A background pulse is thus ready for some sort of monologue, utterance, or chant, like a voice, both the same and different, in mutated form — a dream, a prayer, or letter. One cannot help but wonder if each is in fact a figment of all.

An interesting paradox in Ardor is that despite being intricately intertwined, each segment can also stand independently. Texts that read as “prayer” or “letter” may be as short as an interrogative statement (e.g. “Word open, a red geode. Where?”— p.39) or a two-word heading (e.g. “Circumstantial events” — p.53). And yet, one can also find traces of Gertrude Stein’s linguistic play in some of the “dream” passages which contain more explicit narrative cues:

The blind woman, turning in her sleep miles north,
leans over my dream to see whether I am awake. I,
too, am sleeping and lean over her dream, sheltering
her. We are one another’s present skin. Present kin,
she says. Your blood is my blood. Your blood is from
Asia as mine eons ago when everything was internally
bridged, one aortic root. One mitochondrial missus,
original woman (22).

This “blind woman” reappears frequently, and Lee threads these reocurrences with direct references to Gray’s Anatomy, bird biology, and the Bible, as well as lines by the Chinese woman poet, Li Qingzhao (Song Dynasty, 1084 — ca. 1151). Who is this “blind woman”? Is she Lee herself? Someone she has known? Or simply an imaginary personage? The mystery stays intact.

In general, Lee’s word choice is deliberate and sophisticated. In keeping it so, however, she perhaps risks rendering the already polyphonic and surreal texts more inaccessible to an honest read. That said, her poetic personae are many — birds in flight; the blind woman’s infant daughter; an old gardener; the kwashiorkor, famished red boy; among others. Each is transformed through the simple metaphor of love — a human heart — all of them seeking the genesis of poetic language. This, as an endeavour to write, is already an unusual beginning.

Ardor is Karen An-hwei Lee’s second book-length poetry publication. Her first book, In Medias Res (Sarabande Books, 2004), was winner of the Kathryn A. Morton Prize and the Norma Farber First Book Award. Her chapbook, God's One Hundred Promises, received the Swan Scythe Press Prize. The recipient of an NEA Feollowship, Karen lives and teaches on the West Coast.

Fiona Sze-Lorrain writes poetry under her nom-de-plume, Greta Aart. Some of her recent work appears in Raven Chronicles, New Politics, Oak Bend Review, La Fovea, etc. She is also the editor of Silhouette/Shadow: The Cinematic Art of Gao Xingjian (2007), a translation of Gao Xingjian’s poetry from the French. Fiona lives in France. (www.fionasze.com)
Posted by CutBank at 11:53 PM 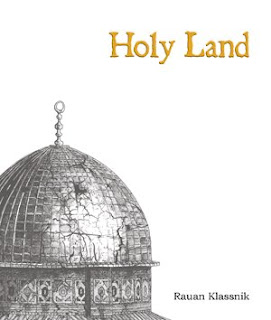 
In Rauan Klassnik's new book of short prose poems, Holy Land, the first piece brings us a child in a ditch, possibly bleeding, alongside machetes with angels sharpening the blades, and beasts stomping and spitting. "You belong to them," the voice of the narrator assures us, in reference to the beasts. The world Klassnik conjures over the course of the book follows the promise of this poem closely.

The angels do not disappear, nor do the children or the blood or the beasts. All are held together in excruciating juxtaposition. Excruciating in just the way the poet intends. Nightmares pervade his Holy Land, dream images of a lover's smashed face and the green of contemporary Auschwitz.

"Blood, like the tail of a horse, splashed all over my chest," we are told in the poem featuring the lover's smashed face, which appears in the book's first section, called Wounded. Through all these untitled poems, blood layers thickly over a dystopian landscape where even "the sound of leaves turning red" takes on a sanguinary tinge. The word blood appears in every other poem though certain sections of the book. W.S. Merwin comes to mind, his broken-necked mice pushing balls of blood seeming to shadow Klassnik's images.

The poems line up before the reader and open fire, but not all at once. In careful succession, they rip into the flesh. Unlike those prose poems which lose tension and concision in the absence of line breaks, and whose composition seems perhaps too casual, Klassnik's works are dense and tightly packed with blunt themes. Made of five to ten short sentences strung together in a paragraph, their thematic unities are death, blood, wounds, alienation, brutal sex and divine abdication. To the latter theme, one poem begins "Talking to God's like jerking off."

Yet the poems, for all their unity, maintain distinct identities through the force of their individuated settings, sound, action, and images. These are cinematic pieces, little Buñuel films that slice the eyeballs of the viewer and awaken her ears to their pulse. The sound of the poems is carefully managed, rhythmically taut, and unafraid of grabbing the attention with loud notes at key moments; "We splash, shout, and chase it out."

Given the subject of the works, the broken rhythms often come like blows, though a brief reverie on the skill of a sushi chef provides a moment ecstatic reflection: "Everything he does - each wrap, each cut - says we are immortal." The center of the poem yields "eternity tightening around us" as the narrator sits with his wife in the restaurant marveling at his surroundings. But it is framed by a beginning sentence depicting a man who is waiting to be hung, and a final sentence on him going to the gallows, accompanied by the couple.

What are we to make of contrasts like this? The poet means to highlight subtler ironies than simply the simultaneity of death in life. His violence has a deeper purpose. But it is not until the book begins to sink in that this becomes evident. The sushi/hangman poem offers us, in addition to a dead lobster on a plate of ice and presumably some delicious tuna rolls, the hope of the condemned. He looks at his guards "as though they would tell him he had a chance," and proceeds singing to his demise. It is not a wholly cruel hope here, but rather one of the poet's essential virtues, the chant of the living against time. That the couple accompanies the man to the gallows demonstrates a solidarity with his circumstance that elevates the living by association with death, at least one met in song.

Death by the end of the book becomes one of Klassnik's vices, but his repeated indulgence in it reveals more to us than the vices of many of his contemporaries. The legion of poets raised imitating Ashbery's "Daffy Duck in Hollywood" don't seem part of the same world as Klassnik. His influences seem to come to him through the realm of Ted Hughes and Robert Bly more than the New York School.

Perhaps sex is also a vice here, where kissing takes place in an abattoir, and "to really break someone in requires abuse, confinement, systematic rape." But relationships, for all the nightmares they inspire in these pages, are also the locus of greatest redemption in the book. A poem about driving through the trees indicates a narrator who has become light, who encourages us to "hold each other and kiss.” This admonition resonates all the more deeply by its placement in the middle of a book which also says "Her body is perfect. Bruised and broken." A short poem about girls carrying kittens in a cage over a rocky landscape also, in a touchingly simple way, sustains whatever innocence is left by the time we arrive at the heart of Klassnik's Holy Land. New life is possible, but only when carefully conveyed over a treacherous frontier. Klassnik has written a book full of dark preoccupations that is worth our time to contemplate and understand.

Rauan Klassnik was born in Johannesburg, South Africa. Now he spends most of his time in Mexico looking after birds and dogs with his wife Edith. His poems have appeared in such journals The North American Review, MiPoesias, No Tell Motel, Caesura, Sentence, Tex!, Pilot Poetry, and Hunger Mountain.

Phil Hopkins is a poet and playwright in New York City whose plays have been read and produced at Access Theater, 78th Street Theatre Workshop, Sanctuary: Playwrights Theatre and elsewhere. His poetry has been published at identitytheory.com
Posted by CutBank at 6:27 PM