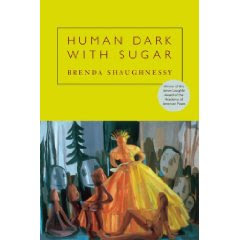 I don’t like what the moon is supposed to do.
Confuse me, ovulate me,

spoon-feed me longing. A kind of ancient
date-rape drug. So I’ll howl at you, moon,

I’m angry. I’ll take back the night. Using me to
swoon at your questionable light,

you had me chasing you,
the world’s worst lover, over and over

hoping for a mirror, a whisper, insight.

The title of her work derives from a question raised in the second poem, “Why is the Color of Snow?”: “Aren’t we human dark with sugar hot to melt it?” Intriguing and original, this line offers us an imaginative lens through which to playfully explore human existence and its various emotional states (rage, sadness, hunger, jubilation, etc.) And when set against the title of her first book, Interior with Sudden Joy, whether intentional or accidental, the title signals a continuation of a certain structure and style.

Shaughnessy sprinkles rhetorical twists throughout Human Dark with Sugar, most of which are neatly arranged and deliberately crafted. Self-reflective questions such as “How long do I try to get water from a stone,” “Why do we only get two/years in exchange for three summers,” or “Do sweets soothe pain or simply make it stick?” hint at more metaphysical or abstract concerns, even though the poet seems to take most of her subject matter from her own everyday life. For instance, the poem “Parthenogenesis” is in fact a disguised, surprise ode to weight gain, a concern that seems banal though at the same time real:

It’s easy to make more of myself by eating
and sometimes easy’s the thing.

To be double-me, half the trouble
but not lonely.

The female body and its eroticism is indeed a theme that Shaughnessy explores in various poems. “Breasted Landscape,” “Vagile,” and “Me in Paradise” all contain subtle yet direct references to female anatomy. The strongest allusion appears in “This Loved Body,” a long prose-poem made up of twenty short sections:

This belly is hardly what I call a belly. Could there be less belly in
it? I am accustomed to women’s bellies, of which there is usually
some. You seem like a machine here, hairless and olive. But when
you bend you are as human as can be, literally within an inch of
your life. Because the machinery is in plain view, you have no secret
stash, nothing for winter, nothing to lose. In an emergency, this
would be an emergency. I am horrified, my thinlet, and won’t ever
let you be hungry.

In general, Shaughnessy writes with an acute self-awareness, a trait that, if left completely unchecked, could be considered an endangerment to the spirit of writing itself. Though this overly self-aware style of writing seems to be a trend in American poetics today, Shaughnessy seeks to balance this impulse with various attentive and figurative voices, articulating images that are at once edgy and unpredictable. I have read her poems with much curiosity, interested to understand how each imaginative leap leads to the next, how each poetic form shapes itself and attempts to weave a dialogue with the poems surrounding it. That said, I would also like to believe that there bristles some optimism, authenticity, and sincerity in Brenda Shaughnessy’s writings, as she makes a bold step closer towards simple love beyond the self, a complex appreciation for common goodness in this, our so confusing world.

Raised in California, Brenda Shaughnessy now lives in Brooklyn. She earned her MFA from Columbia University, and is currently the poetry editor of Tin House magazine. She teaches creative writing at Princeton University and Eugene Lang College of the New School.

Fiona Sze-Lorrain (www.fionasze.com) writes under the nom-de-plume, Greta Aart. She is currently Poetry and Non-fiction editor of Emprise Review. She lives in France.