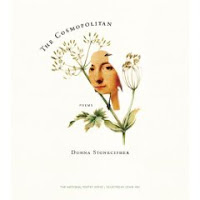 The Halo Rule by Teresa Leo

Given the lush stained-glass art on the cover of this volume of poems, I was relieved to learn in an opening epigraph that The Halo Rule is not a new age directive for living, but rather a sports term. The title poem tells us that the halo rule “intends to protect/ a return man by two yards.” Indeed, this rule—in effect from 1983-2003 in NCAA football games—gave a two-yard circle of protection to punt returners. The idea was to save the returner—who must look up in order to catch the ball—from a jarring full-speed tackle. Leo’s poignant observation follows:

Not so
elsewhere. For us, it’s

sideswipe, no berth, the
deference of play to hurt,
rough lust. (19)

Indeed, in this collection, Teresa Leo writes not about the spiritual, but the physical — the violence that “rough lust” enacts on our bodies and minds, and the ways that our biological urges can (and will) destroy us without hesitation or warning. Desire is the primary concern of The Halo Rule, and appears in most of the poems in some way, even if only to mark its absence or its transmutation into a closely allied urge or feeling such as despair. Recurring tropes here are addiction, possession, hunger, and the color red — all common metaphors for sexual desire. Incendiary images are numerous:

The kiss, if not gasoline, then turpentine, // or two red peonies in a cardboard tube… (4)

…you said my hair was a creature
unto itself, a dark and dangerous thing
that could set the world on fire. (42)

Leo divides her book into four sections, each of which examines a particular phase of a sexual relationship. The narrative arc of the book begins with the end, and the first poem we encounter is entitled “P.S.”

The end is not near. We’ve passed the end, and it’s so far back
it’s like the tit of a cow in a field of poppies, a dot in a field…

Not only are we already at the end, we’re long past it! Appropriately enough, Section I deals with the final throes of a turbulent relationship: “We’re flatlined, sandblasted, / pummeled, untoward (12).” We meet two lovers, each seized in some way by sexual addiction and violence. There are glasses thrown against the wall, punches, jabs, chokeholds, “come-heres and fisticuffs (6).”

Section II takes us back to the beginning of this relationship with a series of poems about a modern Narcissus, poems exploring the chase, seduction, the art of wooing, and, of course, self-love. Yet even as the two lovers are meeting for the first time, Leo calls out a warning: “The woman // stood and turned. He was already thinking/ of the beautiful and various ways he could leave her (21).”

In Section III, we see the two lovers in the middle of their relationship, and their dynamic is clearly about sex and not much else:

After we fuck, he comes to himself,
back from a scattering of parts and phrases,

Finally, Section IV brings us back to where we started, forcing the reader to experience for a second time the couple’s goodbyes and leavings. The last poem in the book, “Aubade”, is a fitting end, bringing us full circle to dawn—a signal that the lovers must now part.

As I read the book, I found myself wondering if Leo strove for such unwavering thematic content; it feels more as if she happened on it incidentally, organically. As a poet, I understand the drive to write our obsessions again and again. By the end, however, I had more of a reader’s-eye view of how consistency can become slightly tedious over the course of an entire book. Pair that consistency with Leo’s fairly uniform (albeit very well-crafted) poetic style/approach, and there could very well be a little bit of reader-fatigue by the end of the collection.

That said, even if I occasionally found myself wanting a poem that looked or sounded just a little different than the others, Leo’s obsessions happen to mirror my own, so I was more than happy to immerse myself in the dark minutiae of this unraveling sexual relationship. The strength of the book lies in the strength of the individual poems. They are well-crafted, and Leo clearly delights in language and well-turned phrases. One of her techniques is to simultaneously present two conflicting realities:

...the way I didn’t see the curve ball coming,
the one that clipped my left hip as I swung the bat,
missing and not being missed. (3)

Thus, the reader must consider both x and not-x; they are somehow both equally true. This is what good poetry should be able to do, to look at the many facets of a complicated situation and recognize the truth of them all. Similarly, Leo is interested in adjacencies, which strikes me as an interest in metaphor.

…How, if at all,
does adjacency fit in, the militant but not mindful,

This type of sound-association also shows up in the book as near-rhymes separated by slashes, which is a sort of violent, unvarnished way of making comparisons. Without putting the words into a full sentence, Leo mushes two words together, puts them on equal footing, and leaves it to the reader to draw conclusions from their proximity. One of the poems describes this method as “the bereft/theft rhyme of desire and seizure” (26). Throughout the book, Leo also gives us baroque/throat (22), read/delete (24), famine/feminine (28), and

the estranged/deranged
call and response,

off-key, off-kilter,
an intersection of streets

the mute improvisations
of a love-sick blood. (68)

Since this collection had the occasional tendency toward repetition and the “expected” view, I particularly enjoyed the off-key notes in The Halo Rule. Ultimately, the poems’ physical presence and honesty allows us to appreciate the collection for what it is:

…Just a book of poems

in a stark white envelope, little disclosures
that sway into oblivion the way bamboo floor boards
give suddenly under the body, its weight. (28)

**
Teresa Leo's poetry and essays have appeared in The American Poetry Review, Poetry, Ploughshares, New Orleans Review, Barrow Street, Painted Bride Quarterly, Xconnect, and elsewhere. She has been a resident at the Virginia Center for the Creative Arts, the Blue Mountain Center, and the Vermont Studio Center, and has received fellowships from the Pew Fellowships in the Arts, the Leeway Foundation, and the Pennsylvania Council on the Arts. She currently works at the University of Pennsylvania.

Amy Schrader received her MFA in poetry from the University of Washington. Her poems have recently appeared or are forthcoming from Fairy Tale Review, DIAGRAM, and Filter. She lives in Seattle.
Posted by CutBank at 5:04 PM