The End of Rude Handles by Jen Tynes 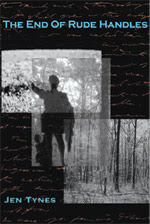 Appended to the opening four part cycle of Jen Tynes’ debut, The End of Rude Handles, is a lyrically essayistic meander set off by the heading “Ways of Contrariness” and further subheadings like "To improvise is to pull out of thick air" and "All the italics are mine." Whereas it may have been customary for regular readers of poetry to assume that poems teach us how to read them, these sections do not leave that sort of decoding strictly in our hands. Though superlatively engaging in the ways that artists revealing their practices and intentions can be, the risk in including such an appendage in the same book as the work it describes (or in Tynes’ case, refers to in slant-wise fashion) can be the limits it sets for the reader. This might have been more of a problem if it didn’t feel quite so much like the appending is itself a fold-out, a map that is more a part of the cycle and thus a facet of the work, rather than just the recommended 3-D glasses. In fact, it is difficult not to see it as the culmination of the cycle.

To begin at the beginning, however, The End of Rude Handles makes its way as a kaleidoscopic collage in four parts, each constructed of declaratives, exchanges and interchanges which are figured over time on or against an overdetermined ground. Put more simply, the poem makes material in language the process of making itself. In the prefatory segment of the poem preceding part I, the speaker reveals that “when I speak of you some object is / also formed in the light of that. // I enfold the brimming object to you.” While this in some way seems to disclose a speaker addressing a “you,” it instead indicates, as the successive passages will show us, that the effort to address this “you” becomes its own object which the speaker can only ever offer “brimming.” Hence, the effort to address is given shape rather than the speaker or the “you,” and instead of the performance of a message delivered in a communally agreed upon lexicon, the reader is presented with evidence of an inquiry of the space between the reader and the speaker. This is further informed (and complicated) by Tynes’ use of other material, especially from (one presumes) the book to which she doffs her hat in her acknowledgments, Handicrafts of the Southern Highlands, and further ordered by her use of capitalization, italics, and white space. The first section sets up the system, beginning after the Roman numeral I with:

The opposing page finds italicized phrases scattered across the white space, also in italics, presumably lifted from the Handicrafts’ appendix: Zion Rose Single // Chariot Wheel Ocean // Wave Acres of Diamonds. The following page is set off by the semblance of a title in all caps: THE UNIVERSAL LOVE OF COLOR. This pattern is repeated throughout the first two sections before in the third and fourth sections all caps phrase fragments are added to the facing pages on the right side. The effect which is produced is of a process that is scrupulously made and scrupulously self-reflexive in the process of being made. In the second section the self-awareness seems to proceed nearly from the text itself. In the opening segment of part II comes the question “Do you think this // is sound.” A few pages later, we are told that “[a] figure / is a popular thrill.” These small, assertive thunderclaps of revelation—the duality of sound as logical and/or musical, the desire even in the most abstracted deserts of the Real for a recognizable object or subject—rise from a mostly perplexing anti-conversation conversation. To wit:

THE KEEN UNPASSIONED BEAUTY OF THE GREAT MACHINE

Propelled by hand
and eventually back

home to me. A figure
is a popular thrill.
The three of them

at me til gone: a follicle,
the shape
of my kin again.
Leaving

the natural horns
in foliage,
kissing

babies in
the face. The rosy
pucker when
I try.

By deploying flat declaratives that are completely devoid of rhetorical swagger, a passage like this encourages the reader to feel its associative logic as inevitable, even after we read it a couple of times and realize that it can only be inevitable to one particularly temporal self. Nevertheless, this is not a solipsistic personal history recollected in tranquility; the mere appearance of the possessive pronoun “your” presumes an other. Depending on whether or not this sort of thing is your bag, Tynes has demonstrated here the ways in which language figures the speaker and the reader, since surely in our desire to be in this loop or to make any kind of sense here, we begin to orient ourselves toward the way the text is, in her phrase, “caught in the act of emphasizing.”

As the sections progress, the language and poetics seem to relax. It becomes apparent that the recurrent word “animal” is a figure for other, whether sentient or constructed, and the deployment of italicized fragments and all caps titles which imply the ongoing extension of lyric segments begin to feel familiar and give rise to a sense of historical location both in a personal and public sense. While some might find the technique and realization of such poems estranging, what is actually happening is an arrangement of the estranged world that commends itself to us as worthy of habitation and consideration. Once and again, too, there is the shock of realization to keep us going: “I am a harness // I use to keep myself / collected”; or “To call a snake a garden // variety and duck / into these handicrafts / for the evening is a gash / in me, I cannot pronounce an end / to naming it.” It is by surfaced assertions like these that the surrounding materials are galvanized. Perhaps it is a problem of our age; it may be that in a perfect world, the materiality of poetic inquiry might be enough, but nowadays we want to see not only the strings being pulled and how, but the sorry and exhilarated puppet master. Then again, maybe it’s just because we don’t wish to see ourselves as the puppets.

The final segment of part IV, which bears the title of the book, finds the speaker admitting that she “burn[s] [her] own / mark into each animal / long after thinking it,” and this is the last motion we get before the appending essayistic sections mentioned above. These sections are far more chatty than the poem cycle that comes before, even as they contain recurrences from the cycle itself; even the heading “Ways of Contrariness” has already appeared in the poem. If one were to suggest a weakness in this book, one might point to this section, but simply because it addresses us with more familiarity and wears its verve and sass on its sleeve; even as it deploys and unveils its strategies as a crafty intelligence, it proves ultimately more interesting (if only to this reader) than the admittedly assured and skillful (and sometimes breath-taking) poem that precedes it. Perhaps this is why it is at the end: Tynes has built and figured a landscape, she has mattered language, and it is ways of contrariness, between she and us, that now animates it.

That said, there are more than enough fascinations and gifts to recommend this collection, though it may address itself by need to selective tribes on the poetryscape. Those readers who like their books peopled with clear equations and traditionally acceptable relationships between this, that and the other may want to steer clear. If, on the other hand, you ever over-poured your coffee cup while wondering what it would be like for C.D. Wright to cover Tender Buttons, then The End of Rude Handles will suit your taste for the outer limns.

Mark McKee has an MFA from the University of Houston, and is currently pursuing a PhD at the University of Missouri in Columbia, where he lives with his wife, Camellia. Recent work appears in Backwards City Review, LIT, Pleiades, The Journal, and is forthcoming from Forklift, Ohio.
Posted by CutBank at 9:26 PM