The Ecstasy of Capitulation by Daniel Borzutzky 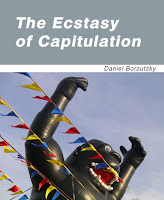 One can say about Daniel Borzutzky's The Ecstasy of Capitulation what has rarely been said about poetry since the beginning of modernism: it's a hell of a lot of fun. That's under the assumption, of course, that one enjoys the occasional verbal crudity—which is also a precursor for enjoying Borzutzky's poems. Inheritor of postmodernity's ambivalence towards language, meaning, and sincerity, Borzutzky's genius is to build instead on tone, relativist interpretations of historical events, and fetishized eros.

Raised in Pittsburg, bilingual child of Chilean parents, Borzutzky's migratory family history, passing through a continent which has produced generations of politically radical poets, is perhaps one of the things which prevents him from straying into complete absurdism. For contemporary poets, this is not merely a matter of taste, but a struggle with the aftermath of Theory. “Especially among young poets,” Tony Hoagland writes, “there is a widespread mistrust of narrative forms, and, in fact, a pervasive sense of the inadequacy or exhaustion of all modes other than the associative.”1 The lyric "I" still exists, but only in a stew of dissociated nouns and verbs. Even when content is couched in full context, poems resist discursiveness by turning away into image or absurdity. In a language already ravished by the vernacular of corporatization, bureaucratization, medicalization, and high technology, poets no longer ask themselves how something should be said, but whether anything can be said at all—resorting to fractured narratives and fractured syntax in the face of postmodernity's nihilism and relativism.

Structuring a poem becomes difficult when we can count on neither content nor the meanings of words themselves. There are many options, one of which is to simply embrace postmodernism's inherent aesthetic—and the itinerant political implications of cultural relativism. Borzutzky prefers instead to work subtly against postmodernism. His syntactic strategies mirror closely those of absurdist poets, but he cleverly injects thin strings of narrative, using historical events and speakers, and the tone of these speakers, to give his poems coherence. His specialty is a manic, obsessive jargon peppered with legalisms, bureaucratic and corporate newspeak, and a positively twenty-first century fanaticism. “Almost unnoticed,” the speaker declares in “Sharp Teeth of Death: An Essay on Poets and their Poetics,” “poets have continuously battled the human race for domination of the earth.” It's the kind of hyperbole you'd expect from Jerry Falwell, Joseph McCarthy, or the mentally flaccid man who was my high school principal:

[P]oets not only inflict social but economic losses on their human enemy by robbing them of food they may need for survival.

There is no question that civilization's worst enemy is the poet, who outdoes all wild beasts in destruction of lives and property. Poets cause more damage than all other tyrants combined.

The savage officialism of the speaker, given over to this ridiculous topic (who, after all, could imagine poets agreeing long enough to inflict “economic losses”), is positively reinvigorating. The speaker's tone, which we all recognize from Fox News, from Hollywood's stock fanatics, and from our daily lives, should we happen to live in a rural area, is the real connective tissue of these poems.

The poems are strongest when structured by an historical or social context. It is in these poems where Borzutzky's talent for humor shines, and it is these poems at which a casual, non-writerly audience roars with laughter. In “Ronald Reagan in Berlin,” President Reagan begins his public address with: “Dear Mr. Gorbachev, if we are together/ Again do not spank me upon my bare buttocks.”

Reagan goes on to describe the effects of such spanking, and to describe an elaborate dream in which he was “a stallion who produced both male and female/ Sex hormones,” the First Lady Nancy was “a castrated male dog/ Who attempted to nurse young puppies,” and Mr. Gorbachev was:

a caponed hen who ceased
To crow, grew a cocks-comb and attempted
Husbandry with other hens.

Reagan describes how, in the dream, he, Nancy, and Mr. Gorbachev are able to converse with a variety of creatures: “ducks,/ Geese, puppies, rabbits, kittens, and chipmunks,” as well as “sails, worms, beetles, and toads.” Delightfully, the poem does not forsake its origins, but doubles back to the original 1987 speech and its memorable lines:

Liberalization,
Mr. Gorbachev, is how we were able to understand
The language of these little animals. Tear down this
Wall, Mr. Gorbachev. Thank you, and God bless you all.

The humor of such a poem, beyond the sexual uber-fantasies, is the staging, the fact that Reagan delivers his emasculating speech to the citizens and government officials of West Berlin and all who listen from the other side of the wall and by radio or television. Notice that in this poem, Borzutzky is at once postmodern and not. He has fractured narrative, by offering a reinterpretation of Reagan's original speech, which is a typical relativist technique. Yet he uses the tone of the speaker and the absurd narrative formed by the speaker's sexual fantasy to formulate a second, complete narrative—which is opposed to the contemporary postmodern aesthetic manifest in pure absurdism. Borzutzky knows that his poem lives because the original speech exists as an historical event.

One fad of postconfessional poets still closely affiliated with narrative has been to write beautifully-crafted, ahistorical poems featuring historical figures, especially artists, scientists, and musicians. The assumption is that, while recent history is now a matter of relativist interpretation, Renaissance history, Romance history, ancient Greek history, and even the first few centuries of capitalist industrialization exist forever in a series of picturesque freeze-frames safely preceding deconstruction's wall of flame. Borzutzky is not one of these. He ranges too far afield of sincerity. And his poems depend heavily on the history they deconstruct. In the end, he is too loyal to historical narrative to entirely disclaim it.

Yet Ecstasy is not a book of protest or even analysis. The bombast in “Richard Milhous Nixon's First Inagural Address” is not a politicized characterization of Nixon. It is play, funmaking, the strategy of which is to exaggerate—with the tone of public speech and a clever modification of content—the simpleminded hypocrisy we now accept in all public figures:

I ask you to share with me today the majesty of squirrel-headed otters.

The spiraling evolution of humanity allows us the possibility of combining animals, of unions between gorillas and hippos, advances that once would have taken centuries.

Additional poems make blasphemous use of the vernacular of economics: “Oh Fidelity Low-Priced Mutual Fund, stick things in me/ as I stick things in you.” “Inflationary Module” from “Desire: 7 Modules,” is a brilliant combination of economic jargon and fetishized eros:

I want to make it with you, baby,
but misguided central planning
has led to a pervasive misallocation of capital.
The central bank is closed, baby,
and I cannot make a deposit.

And one must address the sexual content of Ecstasy. It's about time someone rescued sex from sentimental, heterosexual, Confessional poets. It's about time someone treated sex like the game it's become. Like Borzutzky's approach to capitalized, corporatized diction, his use of sexual fantasy is refreshingly hyperbolic, so over the top that taking it seriously might cause mental strain. Sex, like meaning and Marxism, has become a kind of non-content under postmodernism—a Flash ad in the header of a Web site, a billboard passed every day on the morning commute. Gen-X-ers are accustomed to sex talk, accustomed to Dan Savage and leather stores and cock rings and the need to articulate one's preferred sub-genre of porn. Borzutzky's eros isn't shocking so much as timely.

Sometimes absurdity gets the better of a poem, and the slew of tangential nouns and verbs renders it unwieldy. Like a magnet dragged across a junkyard accumulating nuts, bolts, nails, washers, and cast-off droplets of welded metal, eventually the magnet itself is no longer visible. Some poems of Ecstasy still struggle with postmodern dissociation. “The news/ says the news has disappeared,” reports the speaker of “Away.” “Simple Present” attempts the following lines:

There is nothing, of course, wrong with such poems, except for the fact that they have been written, by various authors, several thousand times since the Surrealists had their start in the 1920s. Terry Eagleton describes the “postmodern consensus against norms, unities and consensus” in After Theory. “In this social order, then, you can no longer have bohemian rebels or revolutionary avant-gardes because they no longer have anything to blow up.”2 Language poetry and absurdism, one might conjecture from such a statement, rally against the long-dead bourgeois of Baudelaire. Far more interesting are the poems where Borzutzky opposes postmodern aesthetics—and succeeds.

Daniel Borzutzky is the author of Arbitrary Tales (Triple Press, 2005)

Amy Groshek lives in Madison, Wisconsin. She holds an MFA from the University of Alaska Anchorage. Amy works as an instructional designer and technology consultant. Her composition process is free of proprietary software.
Posted by CutBank at 1:18 PM