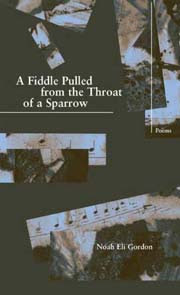 With his sixth book, A Fiddle Pulled from the Throat of a Sparrow, Noah Eli Gordon shows himself to be a prolific writer not only in his fast and steady production, but in his deftness within a number of poetic styles. In this book, he works with the sonnet, narrative poetry, the short poem and the long poem, all brought together in eight sections. His mellifluous form runs from Creeley-like sparseness to a poem that text-wraps the page. He has a great appreciation for the home-run line and image, but remains serious. At all times, he has one eye on the book's overarching subject, which is language.

At first glance, maybe one's first read through the book, it appears that what Gordon studies most closely is man's relationship with the world. Landscapes and objects affect his subjects in unexpected ways, as in the poem "The book of journeys," in which the speaker looks at the sky and feels it is out of place, "each star seemed off kilter." He reexamines and questions the ways that people can and do relate to their environments, thereby creating new spaces for interpretation and experience. His poems form pockets in the universe we know where unknown dimensions exist, where smoke has an indentifiable sound and the night sky isn't necessarily fixed.

Gordon manages to alter perception in the intangible world as well. He deconstructs the frame that man has built for consciousness, that series of imagined understandings that makes being alive comfortable and bearable. Take, for instance, the second half of "A tuning fork turns all this noise to glass."

miming the music
of one digging a ditch,


the rough sketch
of an abbreviated calm,


all this work on balance,
an anodyne for falling in

"A tuning fork turns all this noise to glass" comes from the first section of A Fiddle Pulled from the Throat of a Sparrow, "A Dictionary of Music," which focuses on music as a metaphor for language. Gordon's point seems to be to make the reader fall--and in the poem's conclusion--into his world, or at least fall into his pattern of questioning. In reading his poetry what we are balancing on is the tenuous ground of perceived reality, grasping onto what we know in order to follow him into unfamiliar places.

The other notable subject of "A Dictionary of Music" is death. Gordon seems almost nihilistic when provoking images of emptiness after life in the poem "Phrasing and form." "the terrible skull under such a pretty face / that diner used to be a train car ... everything pretty transitive, aleatoric." Ultimately, the speaker sputteringly concludes, "finality uncomfortably funny." Death is frightening, humorous and, it seems, incidental. Gordon works backwards from the inevitable to find things we can control.

The poet makes an unexpected gesture toward narrative in the following section entitled, "How Human Noun." One might actually see it coming in the epigraph by Gertrude Stein, which reads, "All this has so much to do with grammar and with poetry and with prose." Gordon manages to infuse a feeling of prose into his poetry without taking any radical measures. The poetry in "How Human Noun" works as a compliment to that of the rest of the book.

"How Human Noun" is the story of a marriage, as told in poems that sequentially detail the ceremony scene by scene. The best part is that Gordon completely avoids being sweet. While there are moments of terrific beauty, and the poems are addressed to a counterpart "you," these aren't love poems. They're simply poems about a marriage ceremony. (In fact, his most romantic gesture is formal. Each of the poems is seven lines long and double-spaced, one half of a sonnet.) This is the first poem in the section, entitled, "They said the smallest wooden horse was dead in your costume."

a storm, cicadas, ribbons of smoke above the river

somewhere else a war

& the hour fails to episodic

in the most expensive suit I've ever worn

Gordon provides a context for his protagonist's thoughts in the line "somewhere else a war," making the ceremony a recognition of beauty ("ribbons of smoke above the river") in the real and troubled world. The day is at once usual and an exception, as the sun still sets, but the anticipation has made for high expectations, some of which are not met. The poet's take on marriage is encompassing and honest.

Turning the page from "How Human Noun" to "Untragic Hero of Epic Theater" is like shifting from fifth gear to second on the freeway. "How Human Noun" lulls the reader into the ease of interpreting complete phrasings and ideas with clear tethers attaching them. "Untragic Hero of Epic Theater" is a much denser read, both formally and conceptually. His imagery becomes more surreal and less steady. Gordon offers far less guidance in this section, giving none of the individual poems its own title. The last line of the first untitled poem connotes the danger that these formal changes imply. "The imperative's wax center & a magnifying glass held to the sun." It is definitely Gordon's hand on the glass's handle, and he's directing the beam at the pliable sense of certainty the preceding section provided the reader.

"Four Allusive Fields" is a short section of four sonnets working from a quote by Roland Barthes concerning his character Cy Twombly. "Who is Cy Twombly? What is it he does? / And what are we to call what he does?" Each of the sonnets begins with the line, "Cy listens absently to absent Homer." That recurring line, as well as recurring images and the nonstandard treatment of the form recalls Ted Berrigan's sonnets. Despite these similarities, it's the differences between Gordon's sonnets and Berrigan's that offer the most information. For one thing, Gordon's sonnets are humorless, while Berrigan's could make an Amish man laugh on the Sabbath. Gordon inherits Berrigan's love for sound, but has a much deeper love for the complex concept. Berrigan was a close follower of Frank O'Hara, while Gordon seems more like an Ashbery kind of guy.

"Book of Names" also calls to mind the second generation New York School. The speaker of these poems addresses characters on a first-name basis the way that Ted and Kenneth (Koch) and Bernadette (Mayer) liked to do in their work. But one gets the feeling that Gordon is naming names less literally, and more for the purpose of studying the process and implications of naming as a practice.

Why Bernadette? & why David?
Why Rebecca? Why Mark?
Why the book of names? Why say yes and no?
Why a syllable & its buoyancy?

"Why the book of names?" is a good question. As music is made a metaphor for language in "A Dictionary of Music," "Book of Names" attempts an understanding of language's origins. The section emphasizes the delicate nature of language in passages that simultaneously connote birth and death in the naming process. "Yesterday / I named // a dead bird / Rebecca." He recognizes in beautiful metaphors that what makes language stable is the collective human decision to make it so.

Given this intricate and enduring consideration of language, it should come as little surprise that Gordon ends the book with a poem featuring an epigraph by Myung Mi Kim, which reads, "Cohere who can say." Kim is a contemporary poet whose multicultural relationship with language allows her a unique authority on the subject. The title of Gordon's poem, "Urge to Call" seems to intentionally mirror the first poem in Kim's first collection, "And Sing We" from Under Flag. Gordon's poem stresses language's inability to predate any of its subjects. "begin with the phrase: it's light outside / with a window, the reshaping of water / to map the shoreline between finger and figure." Gordon's project is to acknowledge the subject and then acknowledge language as his acknowledging tool. The goal provides its own self-perpetuating paradox in that poetry is reliant upon language to acknowledge language.

The structure of A Fiddle Pulled from the Throat of a Sparrow reflects Gordon's Z-A process. He begins with the end in mind in the morbid imagery of "A Dictionary of Music" and ends with a beginning in the final line, which reads, "a child who says: the window shows it's time to get up." This allows Gordon to end the book without ending the discussion of language, our habits with it and uses for it.

A Fiddle Pulled from the Throat of a Sparrow is an enriching book in the sense that each read provides more information as to its creation and construction. A single reading shows a collection of sections that it is difficult to recognize as a book. But reading further, one notices strands of sinew binding the work as a single body: a line borrowed from a poem in one section to provide the title for another section, the staid attention to language itself. One would hasty to decide that the widely variegated sections struggle to inform each other. Like any great artist, Gordon asks the reader to struggle to inform himself.

Noah Eli Gordon’s books include Novel Pictorial Noise (selected by John Ashbery for the 2006 National Poetry Series), Inbox (BlazeVOX, 2006), The Area of Sound Called the Subtone (Ahsahta Press, 2004; selected by Claudia Rankine for the Sawtooth Prize), and The Frequencies (Tougher Disguises, 2003). Ugly Duckling Presse recently published That We Come To A Consensus, a chapbook written in collaboration with Sara Veglahn. His reviews and essays have appeared in dozens of journals, including Boston Review, The Poker, 26, Jacket, and The Poetry Project Newsletter. He writes a chapbook review column for Rain Taxi, and teaches at the University of Colorado at Denver.

Michael Flatt was born in Syracuse, raised in Tully and also calls Buffalo his home. He currently studies and teaches at the University of Colorado in Boulder.
Posted by CutBank at 8:27 PM