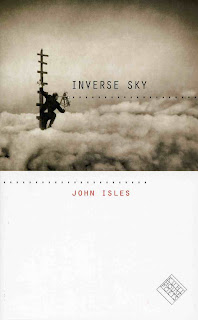 Here in Missoula, a city situated in an ancient glacial lake bed ringed by mountains, the winter often brings on a temperature inversion that causes the clouds to hang low over our trees and houses. If we want any perspective at all after several days of this depressing weight, it is up we must go, up Mt. Jumbo or Lolo where we can look down on the clouds — or up at the blue sky, or far across the valleys through the breaks and fissures. But like the man on the cover of John Isles’s new book Inverse Sky, we bring our quaint viewing apparatuses, our funny suits, and our rickety constructions — our culture — with us (we can’t help it) wherever we go.

In Isles’s Bay Area it is the fog that creates a similar need, that immersed in its wet fingers one becomes “intermingled and cannot distinguish / the skin’s sensations from the world (40).” And for much of his tautly constructed book it is in this intermediary zone, sometimes glimpsing the world below, sometimes glimpsing the world above, that Isles keeps us. He wants us to see that we are water, we are air, but we are also smog and pollution and “pungent chemical decay” in this “umpteenth conception of hell (28)” we have created and continue to create every day.

The first poem “Lighthouse” should not, however, be read as an attempt to orient us in his dark, for this lighthouse, in the age of GPS, has become more of a place for tourists to venture by day than ships to avoid by night; instead Isles wants to orient us in daylight by fire, particularly the Vision Fire of 1995, a conflagration at Pt. Reyes which burned hot, “exploding shells” of Bishop Pine cones that became a beacon for consciousness of global warming, an illumination of a tiny sliver of California’s history, a blip in time between two desert wars, now a green scar. But it is our need to see, our need to be tourists, and our other, perhaps contradictory need to keep the shore pristine — all of these needs force us into “far-off deserts / falling into oil fires.”

But Isles is not content merely to comment on our present predicaments. Deftly he moves us backward and forward simultaneously through biological time, complicating conclusions, making us look deeper, making us see the myriad connections: “We imagined being — before we were — / In briny intertidal zones — pliant among rushes / Whelmed in light spent in the estranged light of day (3).”

Isles structures his book in four parts. If Part One represents the uneasy pastoral, a “gull-glide and gaudy glare in maritime air (14),” Part Two gives us the dark pastoral, where secretaries forget “to put truth in the water (23)” and even the dumpster alley has motion detectors installed (29). If Part Three is the zero, the bleeding without blood, the Ojo de Agua, the nothing ever happening, then Part Four is the next loneliness, the broken light, the diorama with 20-watt bulb inside, the archived Eden, the unhinged, where night vision is briefly granted in order for us to see a four year old sea of foiled clouds. Inverses of each other, these pairs keep us wondering which way is up.

Baudelaire, the flâneur, wanted to “hurl the universe in a jewel.” Isles wants to hurtle it under our skin so it hurts. He doesn’t want so-called nature to be something we view of a Sunday afternoon from the safety of our cars; rather he wants us to live “a grassy-haired, green-eyed shock of joy (31).” He wants us to live with him in the “sun’s drunken Vaquero state (10).” He wants us to pound at the door to be “carried by escalators / into daylight (16).” He wants us to walk with him “into this stranger’s coastline — impenetrable deep sky (37).”

Every so often Isles reminds us we are in an imagined space; that however much what he is depicting seems painfully true to life, we can still “wander out of the poem, into the fog (23)” out of the book if we wish. But where does that leave us? Back in the painfully true life.

While Isles is no optimist, he’s certainly willing to negotiate a truce with Arcadia — if Arcadia will have him. Yes, life is transitory, yes, death is inevitable, but that doesn’t mean that beauty no longer resides. And yet while he may see and chronicle the degradation and ugliness accreting everywhere around him, and while he may pine for changes in the way we treat our planet, unlike the starlet in “Cinema Verité,” he’s not so hayseed to think he can change the world (7).

Isles poetry is more “a hybrid wizardry” of marrying a bird and what comes out. He pleas for someone, anyone to send his roots rain (24). There is “an animal lurking” in him and “the animal wants out (27).” And even if it’s “dead August” and we’ve exchanged “a house of water for a house of debt,” might not redemption be lurking somewhere near at hand?

It’s entirely possible, but when the poet wakes from the present nightmare, then why does he cry to dream again (57)? The land lies dead in its pores. There is a tender terror. A child shepherds ants into a bath. And the poet, trapped behind the glass in the carwash, surfaces from the soap scudded interior, walks up and down upon his own skin — and never returns (59).

John Isles is the author of Ark (Iowa, 2003) and coeditor of the Baltics section of New European Poets. He received an award from the Los Angeles Review in 2004 and a fellowship from the National Endowment for the Arts in 2005. His poems have appeared in American Letters & Commentary, the Boston Review, Denver Quarterly, and Pleiades, among others. He lives with his wife and son in Alameda, California.

Ed McFadden is editor for CutBank Reviews. He lives in Missoula, Montana.
Posted by CutBank at 8:12 PM