Seasons of Lotus, Seasons of Bone by Matthew Shenoda 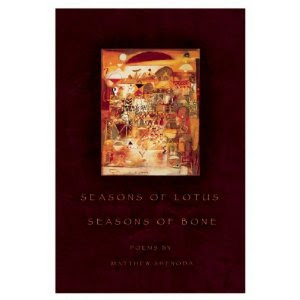 Matthew Shenoda’s new book of poems dwells on the historical and contemporary cultural and physical landscape of Egypt, covering a vast expanse of topics and images associated with the nation. Shenoda teaches poetry and writing and is Assistant Provost for Equity & Diversity for the School of Critical Studies at the California Institute of the Arts and while nothing in his biography is quite clear on his associations with Egypt, via his poetry it is obvious that he has a deep background and empathy for the country and its people. The teacher in Shenoda is also obvious in this work, as he even includes at the back of the book a glossary of many terms germane to Egypt he uses in his poems. Shenoda seems, beyond all else, excited to share an intimate portrait of a complex modern nation (with a long, varied, history which is just as complex) with his reader. That said, at times his writing seems nearly trite and his images appear close to something we’d expect from an Indiana Jones movie or Disney ride. Mummies, tombs, palm trees, poor native kids in the streets, all make their entry into these poems and at times I felt while reading that I would have a more accurate and clear sense of Egypt as a real nation—an actual place—via a Lonely Planet guidebook.

A deeper reading of Shenoda’s work though provides a more acute, powerful, view of Egypt. Although his writing is on the surface easy enough to explore, Shenoda proves to be a poet we need to take on with due care and a lot of time. His poetry holds riches if we are willing to spend the careful moments in finding these; he gives us a very real Egypt, and helps us understand how the most common images of this nation remain the most lasting in the cultural dialog most of us have with Egypt. Those rewards are powerful and worthy reasons for reading Shenoda, however, at times his emphasis seems a bit too pedagogical and less concerned with the art of writing. I do not doubt the images and experiences I gained via these poems are very personal to the poet but some seem too easily designed to convey a certain impression or feeling, and taken outside of the context of ”poems about Egypt”, many of these poems do not hold their own as interesting works of poetry. To give Shenoda the benefit of the doubt, his book is about Egypt, about a given topic and set to explore that topic in depth. It is probably unfair to expect additional merits from poems that are foremost employed to the goal of serving a certain topic and working as a cohesive unit. Still, a poet such as Jorie Graham can write about a spruce tree and also address a handful of other issues in one quick page while Shenoda takes at times a couple pages to sit us down in the desert and paint one single image.

thus Shenoda begins his poem ”Ecology”, which like many of his poems in this collection dwells on the process of being away vesus returning home, whether it is a collective home, a metaphorical one, or a personal one.

Shenoda tells us at the close of another poem, perhaps imploring us to undertake (in very literal terms, undertake) the greatest journey, the hardest exodus, of them all. Shenoda doesn’t lack for images, his ”buzzing telephone wires” in yet another poem I especially find powerful knowing of Cairo’s chronic issues with telephone service and the apt metaphor of telephone chatter for the many lives causing such speech in this sprawling city. However, sometimes I felt in reading Shenoda that the metaphors, the images, piled atop each other and didn’t quite have a clear direction in which to travel. Sometimes, his poems feel like a very astute and useful dictionary has been upended like a box, spilled forth its collection of words. I think the problem I experience with Shenoda’s writing is that I obtain from it striking, powerful, images but they quickly overlap and become too much like the image previous on the page I just turned over. I am sitting there, reading, and thinking ”in a place so varied and dynamic as Egypt, isn’t there more to speak of than old tombs, brotherhood, palms, and religion?”. Yet these are, if not the core themes exactly, the repeating motifs of Shenoda’s poetry. It feels something is missing, something both of modern Egypt and something of ancient Egypt beyond those things we all already know of this great culture. Yes, mummies, yes, tombs . . . but what else?

Perhaps though Shenoda’s project points at the problem faced in most any effort to revisit ancient texts and to write poetry about historical cultures. I have encountered the same issue when writing about Russia in the 1800s or about the Celts myself: how do you bring esoteric details to life to readers without dwelling on what they already know? How do you find focus germane to the nuances that intrigue you while firmly grounding your work in the period and place you’re interested in and making that geography evident? It is difficult to write of a place anew. For Shenoda, his work is really cut out for him as he is not only writing about Egypt the Ancient but also Egypt the Current: that’s a lot of space and time to consider in a slim book.

Here, and in other poems the image of cupped hands is used to represent, I think, not only the true, actual, cupping of hands to bring water to mouth but the broader need and action of moving water and other goods into one’s own control. Egypt’s history, in many ways, is a primary national resource, something that can be marketed for the sake of both tourism and associated economic benefits and also for the sake of national pride. Shenoda does a fine job in walking between the silent stones of history, the everyday lives of normal Egyptians, and the broad, grand, view of the nation that is on the forefront of its international relations. While in places I find his poems nearly trite in their stock images and his voice lacking in enough detail, I also find that his effort to be encompassing, as Shenoda is taking on a huge duty and taking such very seriously.

We run our fingers in sandstone,
Speak stories in rivets and impressions.

In fact, this seems to be how Shenoda himself speaks, how he writes. Using various touchstones of the experience of Egypt, he twists together a comprehensive story. The fact is that this story is lacking in places on details, lacking in plot if you will (for this is a narrative, though one composed of poems; for Shenoda’s stated purpose to be carried out, the overall function must be a narrative one). However, altogether, perhaps this isn’t such a bad thing: I can think of many books of journalistic and travel photography that are high on emotion, high on variety, but very low on real detail and leaving you wishing for more. Shenoda’s poetry provides a dashing view of Egypt and makes me want to dig deeper into the history and contemporary culture that has inspired his writing. It is a bit like looking at a city via Google Earth: you find yourself at times wishing to be down at street level. In fact, I plan to dust off André Raymond’s amazing, magisterial, history of Cairo due in part to reading Shenoda’s poems.

In conclusion, I am not awestruck with Shenoda’s poetry the way I was awestruck when I first read Jorie Graham’s work or Victoria Chang’s book of poems, Salvinia Molesta. His work simply doesn’t impress me in a way that I connect with hard and fast, but there are ample merits to his poems and in the depth and scope of his project. I would recommend that his book should be in the hands of anyone with a keen interest in contemporary creative writing on Egypt, North Africa, or the Near East, or anyone who has enjoyed Shenoda’s previous efforts. To the reader new to Shenoda, I am unsure whether or not this book is the best of introductions because its theme demands a lot of the reader and doesn’t offer up as much, at least in my own case, as I was expecting. Perhaps after re-reading Seasons of Lotus, Seasons of Bone I will take from it what Shenoda intended, for now it is an interesting collection of poems that has some strong points, but simply not quite the caliber I was expecting given the grand scale of its ambitions. That said, I am warmed to know there are poets like Shenoda who are not afraid to tackle such ambitions.

Matthew Shenoda's poems and writings have appeared in a variety of newspapers, journals, radio programs and anthologies. He has been twice nominated for a Pushcart Prize and his work has been supported by the California Arts Council and the Lannan Foundation. Shenoda's debut collection of poems, Somewhere Else (Introduction by Sonia Sanchez) was named one of 2005's debut books of the year by Poets & Writers Magazine and is the winner of the inaugural Hala Maksoud Award for Emerging Voice, granted by RAWI , as well as a 2006 American Book Award. His latest collection, Seasons of Lotus, Seasons of Bone, was published in Fall 2009 from BOA Editions. He has taught extensively in the fields of Ethnic Studies and Creative Writing and is currently Assistant Provost for Equity & Diversity and on the faculty in the School of Critical Studies at California Institute of the Arts. He lives with his family in Los Angeles.

Mike Walker is a writer, journalist, and poet. His original research and other academic work has been published in: AirMed, Goldenseal, EcoFlorida, BrightLights Quarterly, the ATA Chronicle, Multilingual Computing and Technology and other journals. His journalism in: The Florida Times-Union, The North Florida News Daily, Satellite Magazine, Twisted Ear, and other publications. His poetry in: Meanie, the Church Wellesley Review, Tipton Poetry Journal, and other publications. He lives in Gainesville, Florida.
Posted by CutBank at 12:33 PM