Forth a Raven by Christina Davis 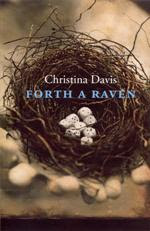 In her new book, Forth a Raven, Christina Davis keeps the stakes consistently high. In nearly every poem, Davis directly invokes emotionally charged concepts that most contemporary poets would refer to more obliquely. For example, the first poem, which shares the book’s title, contains the words “god,” “love,” and “die” inside twelve short lines. Impressively, the poem stands up to the words. The fundamental concepts they represent exist within a dreamlike world where emotional power is wielded and perceived in unexpected ways, so that the conventional meanings of the words feel freshly altered. Throughout the book, the conflict this creates puts stress on the poems, building a constant feeling of reverence and pressure.

This pattern begins in the first line, in which the boundaries between god and the world are redefined: “In the dream, we take god out of the attic and put back the birds.” God, here, can be physically contained and physically discarded. Birds can occupy the role of deities. People possess an immense power, an ability to move gods around, but the whole line is confused and otherworldly. Also, the emotional charge of the word “god” leaks into the more mundane words. “Attic,” for instance, becomes associated with heaven; the image of birds in an attic is not just a pretty picture, but an unsettling one, because the birds are replacing god, or rather, taking their rightful place where god has been. Reading the line raises questions. Where does god go? Who took the birds out of the attic in the first place? What are they going to do there now?

The poem does not answer these questions. Instead, it asks its own. Davis writes, “Every question/ I have ever asked could be ground down to/ Do you love me? Will I die?” These two large questions hover over the rest of the book, so that the act of questioning itself takes on consequence in every poem. This is true of the hard questions (“Are you beginning/ to go away?” a lover asks a lover), and also of the more simple ones (“West what?” asks a confused speaker who is called on to give directions). The questions create a sense of expectancy, a desperate desire for answers.

Answers, however, are not the point. The cryptic answers that the poems offer are always aiming at an unfathomable something they can never fully state in words. The first set of questions (“Do you love me? Will I die?) receives the following response:

We came in full view

of an island
or a continent, for we knew

Though she focuses on new perspectives of god, love, and so on throughout the book, Davis does not try to define or explain these concepts. Instead, she impresses on us the immensity of uncertainty. The speakers of her poems not only do not know the answers to their questions; they know they do not know, they think about what it means not to know, and they conclude, at last, that not knowing is an essential part of the human experience. But this unknown is not just something to wrestle with. It inhabits its own space and takes on its own beauty.

Unlike human beings, who can only glimpse this mysterious space, the birds in the poems inhabit it. Birds hold a position of power, and although they do not provide understandable answers, they do lend perspective. One version of every life “is told from the point/ of view of the sky.” This bird’s-eye view is without self-interest, and its perspective encompasses not only the living person, but also everything around that person. Partly because of this larger perspective, birds provide a link to reverence and mystery:

The field quiet and birded, across it a deer has fled
and then turned back
as if it left some part of itself behind,
the part that feared me.

“Birded,” here, is more appropriate than the more standard “full of birds.” The word emphasizes the birds’ presence and significance; for the reader, the “birded” field is larger and sharper than a field “full of birds.” This image creates a powerful emotional space to accommodate the deer’s passage. Perhaps more importantly, it gives the sense that some part of the mysterious unknowable world can occasionally leak into the known one.

The human speakers of the poems aspire to the birds’ breadth of perspective but never achieve it. The speaker in “The Sadness of the Lingua Franca,” for instance, cannot master the language she needs to express what she thinks the birds know: “In Bird, I speak brokenly. Hiss and flail and never learn.” The English language, on the other hand, is overused and arrogant:

The language is famous and followed,
it has no loneliness left.

It has made it to the moon. It has got god
to speak it. It will get
to everything first, if it can.

Pinned between the flaws of her own language and her flawed understanding of a foreign one, this speaker nevertheless refuses to accept imperfection. Instead, she cobbles together a language of her own: “But not the swan, pale as a page/ I will never have written.” This syntactically odd fragment creates an illogical but somewhat satisfying conclusion to her dilemma, even though it does not quite solve it. The beautiful thing she sees before her is similar to something she will never create, and so it does not quite fit into the real world. However, addressing a beautiful unreality is a way for her to appeal to the unknowable realm that so fascinates her. She does not always have to wait for it to come to her (as it does with the deer in the passage above); she can probe it from the outside, to a limited extent, by using language that has a connection both to her own world and to the other one.

There are a few places in the book where the overall pressure lets up a bit. By far the weakest poems are those that deal with personal romances. In “The Primer,” for instance, a man chooses to remain quiet rather than tell a woman he loves her, and the woman reflects, “In the history of language/ the first obscenity was silence.” Here, Davis gives up some of her control. She does not create the dreamlike, associative background that controls the way it is possible to read the words in her other poems. Instead, she invokes the common experience of feeling unloved, leaving the reader’s personal associations to fill in the gaps in her writing.

In spite of its small weaknesses, Forth a Raven is worth reading more than once. It never feels frivolous, it never shies away from complexities, and it rewards the work of reflection.

Christina Davis received her B.A. and M.A. from the University of Pennsylvania and her M.Phil. in Modernist Literature from the University of Oxford. Her poems have appeared in American Poetry Review, Boston Review, Colorado Review, Gettysburg Review, Jubilat, LIT, The May Anthologies (selected by Ted Hughes), New England Review, New Republic, Paris Review, and Provincetown Arts (selected by Susan Mitchell). The recipient of several residencies to Yaddo and the MacDowell Colony, she currently works at Poets House and lives in the heart of Greenwich Village.

Melissa Koosmann's poetry has appeared or is forthcoming in Indiana Review, DIAGRAM, Mid-American Review, and other journals. She is a graduate of the University of Arizona MFA Program in Poetry, and she currently lives in Tucson, Arizona.
Posted by CutBank at 9:54 PM