The Totality for Kids by Joshua Clover 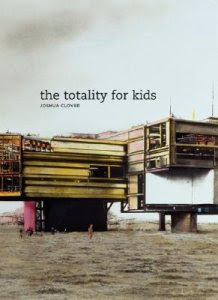 Joshua Clover’s new collection, The Totality for Kids, reminds me of a favorite quotation of mine, that appears in an ars poetica by A.R. Ammons, which goes: “freedom engages, / or chooses not to, what in the world is / to be engaged.” And this quote seems an apropos way to begin a discussion about Clover’s second book because he clearly stakes out what he is engaged with—the city; the urban scene and its byways. That he’s capable of incorporating a host of influences/sources into a poem deftly, and quite often brilliantly, should be no surprise to anyone who read his first book, Madonna anno domini, where in the poem, “Map of the City,” he had already begun his preliminary explorations of the urban scene. And we can use some of that work to begin guiding us through this new book. Clover ends the poem by stating:

....If everything
has already happened, I may be
writing to you from the City
of the Dead, the white-bodied buildings,
then the birds launching over
& over again as if disturbed,
it’s not so bad here, I’ve been
befriended by several beggars
who seem to treat me as an equal,
we talk & talk about it, I agree
with all the words except “New”

I trust that I am addressing fearless readers, who are afraid neither of intellect nor a broken ceramic curiosity, because this book places demands upon the reader. That said, the casual reader might simply read it to enjoy Clover’s amazing facility with language. The passage above, from his first book, shows much more conventional lyrical traits: enjambment and leaps in image that present a “personal” perspective. But what the poet proposes in this new book is that we lose that sense of self that judges what a poem is and what it is supposed to do. Take, for example, the poem, “At the Atelier Teleology,” where the poet compounds (and confounds) the lyric possibilities with truly radical leaps of logic.

The sun tutoyers me! Adrift beyond heroic realism
In the postmodern sublime where every window can lie
Like a priest, adrift in the utopia for bourgeois kittens
Having of late learned the trick of how to listen to two
Songs at once—double your measure double your fun!—
It seems to defy death and still the commodity
Is not cast down.

What he has arrived at is a line that might seem lyrical but does not develop the personal story or perspective. It is a world we have to understand for ourselves. We have to find our way into this world alone; he doesn’t provide any cues.

I am a firm believer in the interplay of opposites, and do not buy into the construct of fixed dualities that are the hallmark of our society (blue-red; patriotic-unpatriotic, etc.). Opposites by their nature coexist and intermingle—coming together and then separating, over and over. What we can understand as truth lies in the merging of the two, but also, paradoxically, in their act of separating. The upshot is that by looking at this activity and how it works, we can get a better sense of how our world really works. Clover’s ability to write about this concept through poetry speaks to his strength as an original thinker about contemporary poetics.

The famous and the dead have learned to fall between our eyes
And their forms in heaven: a philosophical eclipse
Which edges them in light, like bodies in the nineteenth-century
Photo plates enwrapped in their emanations and pale shrouds.
They have their own cities called Necropolis and New York
Built of what they are said, the famous and the dead.

(“Feral Floats The Form in Heaven and of Light”)

You might think that the reaction to the past is to envision (and sometimes to try to create) a utopia. However, for Clover the city of Utopia is a nostalgic construct, as he illustrates in the first section of “Poem (I come across the paving stones)”. He ingeniously develops this idea by sandwiching one line of personal story between layers of concrete (orange soda, watermelon) images and abstracted (theory of red, scrawled changes) impressionistic description.

The brief capital of disturbances.
And within that city lies the city
Utopia with its little sojourns
And orange soda, Utopia with
Its watermelons and televisions.
Inside, city that holds the happiest
Disturbances of my youth behind gold
Facades. Staggering up from the river
Full of forget in the flare of evening
One sees a city where the negative
Held its court. And inside that, city which
Is little more than a theory of red
In everyday life: red suburbs, rouge
Of nostalgia, series of scrawled changes.

Clover recycles the idea of utopia and thereby redefines it. Utopia then becomes the mind’s construct of the mind looking back on the pleasant and sometimes complicated past (as in “disturbances of my youth”) which, however, upon investigation is more like a silhouette; memory, or forgetfulness, often soften and simplify past events. And seeing beyond this, red and shades of red, which to me represent the strong but primitive desires through which we develop our sense of need. Yet it’s this same nostalgic impetus that feeds the visionary, the one envisioning the future city or New Babylon.

Essentially, this utopian form that is birthed in our gut also meets the future in our gut. I might say that here is where desires meet intellect; and interestingly, they arise from the same source. The only reference we have to New Babylon (aside from the cover art by the same name) is found in the prose poem “OMA”:

What is fascinating about this quote is how both past and future cities are places of the dead. And, if you think about it, the poet is right. Clover has clearly examined for himself the dynamic interchanges of these worlds, as well as each of them individually. What makes me convinced that he understands this interaction of worlds is in how he writes about the present world.

The present that Clover shows us is something like a “floating world,” much like the modern Ukiyo-e (woodblock prints) of the city. And I don’t think my association is coincidental (he uses the word “floating” quite a few times throughout the book). The story of this art form, the woodblock print, concerns the commodifying of art for a growing middle-type class in Edo Japan. However, by the twentieth century, artists were using the prints to depict a nostalgic past, colorfully elegant. And that was the beginning of the end in a sense because it also happened to reflect the growing nationalistic military-industrial philosophies—reclaiming or reestablishing the might the country once had. The warping of art to achieve social-political ends, as in our government’s touting of American abstract art in the 50s and 60s as a reflection of our freedoms, stands as a subtle undercurrent within this book as in “Year Zero,” where “Nothing is true everything is the case.” Who are we in this age of spin, where fact is a debatable entity? You may not like the answer, as this final section of the poem suggests.

Now must begin again it must be new time.

In the morning of the sign lying in bed in cold Utopia and alone under
the black square.

Your ears swelled with flowers a corpse in your mouth.

You are free though a freedom with its ribs showing.

But we have a choice. If we do not engage with events in everyday life, we are simply floating through our world. This is Clover’s warning to us.

Joshua Clover is the author of The Matrix (British Film Institute, 2004), Their Ambiguity (Quemadura, 2003) and Madonna anno domini (Louisiana State University, 1997). He is Associate Professor of Poetry and Poetics at the University of California, Davis, and is a contributing writer for the Village Voice and The New York Times. He maintains himself here.

Christopher Burawa is a 2007 recipient of a National Endowment for the Arts Literature in Translation Fellowship. His first collection, The Small Mystery of Lapses (2006), won the Cleveland State University Poetry Prize. His chapbook of translations Of the Same Mind (2005) won the Toad Press International Chapbook Competition. Burawa has also received MacDowell Colony and Witter Bynner fellowships.
Posted by CutBank at 9:14 AM