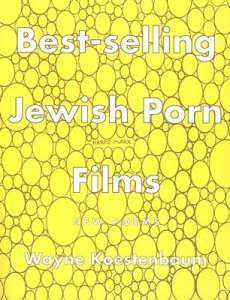 Koestenbaum’s poems include subject matter as diverse as Plato, Judaism, and “John Wayne’s Perfumes.” These are not poems told in traditional narratives. Instead, Koestenbaum allows his poems to explore many avenues; he pairs what may seem unpairable or unrelated. For instance, in the poem “In This Vale Of Tears We Call Existence,,” he writes, “in this Shorty I call Julia Child / in this cute seminarian I call blow job / in this lamplit hair salon I call brutality in South Boston / in this Catwoman I call interpretation / in this Washington D.C. I call laugh and clap your hands.” Pop culture, place, sex, and politics all make an appearance in this stanza of the poem. This poet’s world is a diverse place; the reader has to be ready and able to leap around subject matter. Ultimately, the pairings in these poems are one of the main points of the collection: life’s collisions are often strange, if only we’d open our eyes and ask if “Crisco is kosher.”

Koestenbaum is conscious of the reader’s desire to understand, and the way many readers assume poetry is autobiographical. In the sixth section of the poem, “Pierrot Lunaire,” Koestenbaum hints at the readers need or want to know or understand a piece of writing in regards to the writer’s personality. He writes:

I ask if her novel is veiled autobiography
afraid this interpretation won’t please her
so far I see on her face no signs irreversibly saturnine
in the dream I tell her I’m writing poems tangentially touched by
Pierrot
sitting beside Susan Sontag at a dinner party, an elliptical table

Here, perhaps like the reader who looks to link Koestenbaum’s life to his poems, the speaker beseeches the famous critic and writer about the “veiled autobiography” in her pieces. What makes is snarky or even ironic is that fact that Sontag is a critic, a genre ruled by expectations other than personal truth. Here, Koestenbaum alludes to the fact that poetry doesn’t have to automatically equate with “autobiography” or traditional ideas of truth.

The collection uses repetition to not only link what one might think unthinkable, but to create new meanings for its subjects. Koestenbaum’s is aware of how people create meaning, whether it’s through cultural icons or through politics and metaphor. In the title poem, he writes:

Ultimately, this poem operates on a number of levels. Of course, we have Koestenbaum’s tongue-in-cheek humor. However, behind the raunchy language and context of the poem, there is also the levity of such lines as “Jews Beg for Mercy.” In this poem, religion, ethnicity, sex, and “the fallen,” collide. Koestenbaum is not afraid to offend, and he is not afraid to tackle the world and its culture. The repetition in his poems results in a meditative state. In other pieces that use repetition, figures like Judy Garland and John Wayne become the icons of Koestenbaum’s prayers.

Though trim and sly, these poems feature some beautiful and complex lyricism. Koestenbaum’s poem, “Crevice,” is tuned to collision’s music. He writes how, “I can’t tell apart / human beings and lawn ornaments. / More, later, about my vast holdings.” Here, we have the same strange pairings, but we also have a heightened layering of sound: consonants echo and vowels flirt within and between lines.

Ironically, though the poems are flippant and snarky, their tone and openness of subject matter make it seem as if Koestenbaum is shooting the breeze with the reader. The world is often full of strange pairings, strange occurrences, trauma, and humor. Koestenbaum’s singing and laughing as he experiences the world; his collection is truly, as one poem states, an “elegy for everyone.”

Wayne Koestenbaum is the author of five collection of poems; a novel, Moira Orfei in Aigues-Mortes, and five books of nonfiction: Double Talk: The Erotics of Male Literary Collaboration; The Queen's Throat: Opera, Homosexuality, and the Mystery of Desire; Jackie Under My Skin: Interpreting an Icon; Cleavage: Essays on Sex, Stars, and Aesthetics; and Andy Warhol. Recipient of a Whiting Writer's Award and nominee for a National Book Critics Circle Award, Koestenbaum is currently a professor at the CUNY graduate school.

Lisa Bower's poetry and reviews have appeared or are forthcoming from such places as Mid-American Review, The Southern Review, Jacket, Rattle, The Hollins Critic, and The Mississippi Review. Though she has an MFA (golf clap), she's not poor or working for "the man." She thinks the starving artist stereotype is so 1992.
Posted by CutBank at 2:15 PM