Orpheus on the Red Line 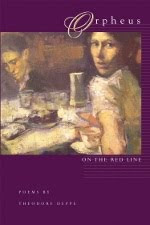 There seems to be something about working in health care that turns people into writers. A number of poets and journalists come to mind who have been nurses, doctors, or researchers in the biomedical sciences, with William Carlos Williams being probably the best-known of those who were poets. For Williams and other poets perhaps being a physician (in William’s case) or other careers in health care offer both the secure paycheck that poetry lacks plus a wellspring of inspiration via seeing people at the crossroads of life and death, the junctures of disease and health. The healing arts, in turn, have noticed the benefits of the literary arts for professionals and patients alike and a number of hopsital-based arts in medicine programs make extensive use of writing as a form of therapy. Moreover, a number of journals exist that cater to publishing the creative writing of health care professionals and patients.

Theodore Deppe has had a long career as both a poet and a nurse, and his new collection of poems, ”Orpheus on the Red Line” speaks to his experience as both. To any cynic who would imagine the poetry of a nurse to only be filled with tales of suffering, Deppe’s work is a refreshing change of mind as he explores the nuances of human experience in a variety of ways. Like all but the youngest of poets, Deppe deals with age and the passing of time in his work, but often in a novel yet very realistic way:

we never unpacked from the last move,

reminders to see a dentist who

begins his poem, ”On the Natural History of Possessions”, which continues with a variety of historical, literary, and personal references. Yet in that first introduction of unpacked boxes, Deppe has us hooked: the ”dentist who died five years ago” reminds us of the paperchase that connects us in modern society with those insurance agents, doctors and dentists, kid’s teachers, and others who in one way or another play needed roles in our lives. How many notices from the dentist, the veterinarian, the physician have we all found in our mailboxes and how many are packed away or lost for whatever reason? These are communications given to a proper life in a small, finite, span of time but Deppe demonstrates how they take on a further life of their own until finally the silverfish eat away at their paper and they become dusts. Much of Deppe’s writing in ”Orpheus” is along such lines, reminding the reader of the variants of means of communication and connection in our lives. When Deppe writes in the poem above that ”for half a year, I walked around Ireland with a small rucksack” he makes clear the choices involved in living life, the sense of mobility versus the sense of possession.

Unlike the Graveyard Poets and many contemporary poets also, Deppe is not concerned simply with mortality and tangible humanity, but is more concerned with the ways that human experience demonstrates itself in memories, dreams, and communication. He spices his poems with references to communication via song, birds also singing their songs, random distant sounds, letters and conversations. In my mind though, his greatest poem about communication and probably of the whole book is ”Misremembering the Classics” where Deppe details his efforts to calm down a violent adolescent patient in a psychiatric ward. I won’t quote this poem here, for it’s best served to read it in full, and however powerful a quote might seem it would only slight the depth of Deppe’s work in this instance. While it is not surprising that Deppe brings his combative young patient to try writing poetry himself over the course of the day following his outburst, the details of this journey and the honesty found therein are what make the poem powerful. No complete ending nor promise that this patient will make better of himself, but the thread of hope that he in fact may is all Deppe provides. In one poem we are given a rare glimpse into both what it must be to work with the mentally ill and what it must be like to actually be such a pateint. The poem is not all-emcompassing nor pretends towards such, but it carries a gravitas often missing in even the best writing about clinical experiences with patients.

Having worked myself in both lab-based and clinical medical research, I know that we encounter in health care things seldom seen elsewhere in life and many of these experiences can translate to powerful writing, however, too often such writing comes across as trite due to the same emotions and even the same situations being brought up time and again. Deppe has masterfully avoided this when he writes of patients, as in the poem ”Misremembering the Classics” and brings us instead writing so fresh it made me feel, even as someone who has experienced similar things in real life and then tried to write of them, that I was ecountering something truly novel and unique. Never does Deppe write lugubriously or in a way that tries to ground the poem in emotion alone: in his poem ”Sebald” we travel from Poland to China and then back to California all while following the leitmotif of the sparrow, but in this case sparrow not as metaphor but as real bird affected by the whims of human thought and human action. Deppe tells us of a man feeding sparrows and another, Chairman Mao, determined to kill them (Mao mistakenly thought that sparrows were consuming a great deal of grain and thus ruining the crop of wheat for starving Chinese). The tales of humans and their actions, for better or worse, are obviously enough fuel for writing and Deppe allows the human to be human and the sparrow to be sparrow.

In his poem ”Orla”, Deppe addresses head-on his topic of a woman who is in the hospital, without overtones or metaphor. This stark approach tempered with touching details provides a portrait as clear as a good photograph. What is most essential in writing about a patient and their plight? To make them seem human (which they of course are), to make them seem ill (which they are, also)? Or to allow latent details and masterfully-crafted words turn these moments of their lives into real and honest views? I would take the latter, and the latter Deppe provides. Like his previous book of poems, ”Cape Clear”, Deppe works with human emotions in a manner that is both deep and refreshing. His poems, while short in length, read long: The sheer amount of detail and the feeling of true travel comes across as he shares even simple narratives. It is rare to see such a strong ”narrative” approach in poetry that neither aspires to be epic nor bending towards the arena of fiction.

Of books of poetry I’ve read thus far this year (and I’ve read my share) Deppe’s ”Orpheus” is one of the most original and his voice is clearly unique. I suggest it highly to all interested in contemporary American poetry and poets and also to those interested in writing by health care professionals. While the lion’s share of the book is not directly concerned with health care, those poems that thus enter Deppe’s other career are to be valued for their voice and insight. A truly impressive book.

Ted Deppe was born in Minnesota, and grew up in Indiana. He worked for many years as a coronary-care and psychiatric nurse and has taught creative writing in high schools, universities, and graduate programs in the United States, England, and Ireland. His previous books include Children of the Air and The Wanderer King (Alice James, 1990 and 1996), and Cape Clear: New and Selected Poems (Salmon, 2003). He currently teaches in the Stonecoast M.F.A. Program and directs Stonecoast in Ireland, where he now lives with his wife, poet Annie Deppe.

Mike Walker is a writer, journalist, and poet. His original research and other academic work has been published in: AirMed, Goldenseal, EcoFlorida, BrightLights Quarterly, the ATA Chronicle, Multilingual Computing and Technology and other journals. His journalism in: The Florida Times-Union, The North Florida News Daily, Satellite Magazine, Twisted Ear, and other publications. His poetry in: Meanie, the Church Wellesley Review, Tipton Poetry Journal, and other publications. He lives in Gainesville, Florida.