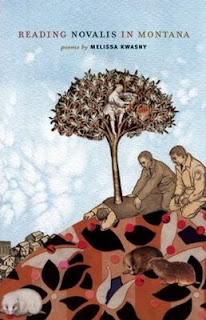 An Intuitive Measure of Nature

In-between re-reading the last few poems and embarking upon this review, adjectives such as “erudite,” “sensitive,” “distilled” and “deft” keep recurring to me as approximate words for rightfully describing Melissa Kwasny’s third and latest collection of poems, Reading Novalis in Montana. The title poem, which opens the book, is a well-envisioned summation of the experiences that Kwasny will evoke throughout the book. Embedding fictional voices with real thoughts and dialogues, the poet inserts brief quotes in a light yet welcoming manner that directly illuminates her intimate correspondence between scholarly interests, an inner world, and the nature that surrounds her in western Montana:

The dirt road is frozen. I hear the geese first in my lungs.

Faint hieroglyphic against the gray sky.

Then, the brutal intervention of sound.

All that we experience is a message, he wrote.

If first one bird swims the channel

Across the classic V, the line flutters, and the formation dissolves.

In the end, the modernists must have meant,

It is the human world we are weary of,

our arms heavy with love, its ancient failings.

A later poem that echoes this is “Reading a Biography of Ezra Pound in the Garden.” Also inspired by the literature she was engaging in at that point in time, Kwasny keeps her eyes fully attentive on delicate details of life, which spring out spontaneously in her immediate world. Nature’s fragility, coupled with tenacity, touched her as she mused philosophically about her seemingly trivial quotidian life:

Wet, limp, as if just born, the five petals unstick

from each other. I have blundered always,

blow past my bare ankles, a cat sprawls on its side

across the lawn. I don’t know how humanity stands it,

the heat he might mean, too much going on

and much of it boring. He writes: I am homesick

after mine own kind. The zucchini, everyone

knows, is prolific. While my guests come and go,

pilfering my time, it offers one green fruit a day,

Interestingly, after concluding the first part of her book on this note, Kwasny delves into a 12-sectioned long poem entitled, “The Waterfall.” This lends a different weight to the general structure of her work and gives a new color to its entire narrative arc. Mythic metaphors and references from the indigenous culture are many and recurrent; they are subtle but evident. On the other hand, line energy also builds itself up until it reaches the eighth segment (“The giveaway dance”) in which speed and intensity syncopate in a drumming and organic oral appeal:

Here is a jar of wild chokecherry jam

Here is a pouch of Old Red Man Lucky Strike

Here is a dollar bill for each of your fifteen grandchildren

see how they dance with empty hands

Here is the fish tank the rest of the bannock

and finally he gave away the house

Here in the trailer house on the reservation

Here where the ragged last of the tribe come with ribbons

Here where the medicine man hangs them in the bundle

and sets the bundle swinging with a stick

Now since the black spades of aspen have hit the ground

Now because the drumbeat has not changed and has not stopped

As if to sustain the rhythmic rigor and lyrical density, the poet continues into the third part of the corpus, presenting yet another major work, “The Directions.” Sequenced in a lucid coherence, each of the twelve segments has a straightforward title, which in turn furnishes a direct key to its central landscape or theme: “Creator,” “Soul,” “The Ceremonial,” “The Old Ones,” “Animals,” “Shooting Star,” “The Poles,” “Light,” “Rock,” “Earth,” “Fire,” and “Herbs.” In a similar vein, the book ends on a textured tonality, for Kwasny has chosen yet another sequenced poem, this time, a 9-sectioned prose piece: “The Under World.” Darker, it evokes several losses and contains lingering traces of solitude, isolation as well as uncertainty. Questions and doubts hang in mid-air —

Up in the air. A peculiar phrase. What does it mean that nothing’s landed? (…)

Seed by seed, the working up through the soil. But is time really accomplished

without us? The dark bud unclasping? The stirring of air? The sex-cluck of the

robins at the butter dish?

All in all, Reading Novalis in Montana is a positive and delicious read. It represents Melissa Kwasny’s consistency and conscientiousness in creating layered yet intricate lyrical poetry. She dedicates herself to expanding beyond a mere descriptive depiction of episodes and energies to a wider world. Living side by side with nature plays a vital role in molding a quiet, meditative quality in her distinct poetic voice. With this, she thus strikes a balance with robustness by constantly pushing each line breath, experimenting with form and scope.

Born in Indiana, Melissa Kwasny is the author of two previous books of poetry, The Archival Birds and Thistle, winner of the Idaho Prize. She is also the editor of Toward the Open Field: Poets on the Art of Poetry 1800-1950, and has authored two novels, Trees Call For What They Need and Modern Daughters of the Outlaw West. She lives in western Montana.

Fiona Sze-Lorrain (www.fionasze.com) is an editor at Cerise Press (www.cerisepress.com). Her book of poetry, Water the Moon is forthcoming from Marick Press in Fall 2009. She lives in Paris, France and New York City.