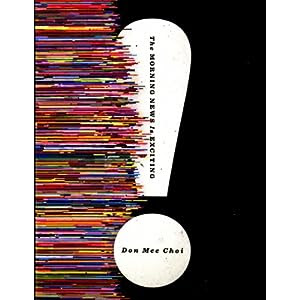 
“Say no lame!” the book opens. What might stand as an imperative for those of us living in the West, The Morning News Is Exciting exhorts us to face our international roles as imperialists. Here is a case for “political” poetry, (if it is our fear that we’ve lost our imaginations to a grey, harping, secular concrete when we create, publish or read poetry that knows its way around systemic oppression) made by retaining the starkly salvific and the significantly weird. Don Mee Choi’s poems give treatment to current events, but disallow familiarity of those events, and through this defamiliarization, we come to a greater understanding.

In thirteen sections, all containing discreet poems that range in form from epistolary to homophonic translation, Choi remains preoccupied with distance, loneliness, and the circumstances that create them. This is from the fourth poem of the section Diary of a Translator:

And earlier, in “10 Aug 2002” the fourth poem of the section Diary of Return, she writes

When I return when I return I say my twin of a twoness paces the bridge over the river of oneness and translates exile of an exileness and empire of an empireness while I trace the alleys of my childhood and find no one.

This yearning is ‘traced’ against a world that we already wish were different. In “10 Sept 1999”, the poem preceding the one above, came this figuration:

Another mysterious death of a GI’s woman (....) That is not to say GIs will now rape any woman due to homesickness and R & R. What needs to be said is that from elsewhere I translate the report of the death of a woman I met two months prior in Tongduch’on and that colonial distance can be saturated with separation due to homesickness of a different nature.

The language and conclusions drawn in this section buoy us through what might have been our wariness of the prosaic, and demonstrate that Choi’s keen perceptions were not just happy accident in the opening sequence Manegg. The bizarre grammar there stems from the passage’s being a product of a homophonic translation of Manteg by Monchoachi, the Martinican poet. Choi has said “When translation fails, that is when we take orders from the darkness, displaced identities easily become worthless beings.” To stave off pain for these potentially displaced beings, she takes on the responsibility of conveying the experience of those who might not otherwise speak (“Females are silent” she writes, in the first poem of the section Instructions From The Inner Room). Her homophonic translations do not fail, and like many sequences in this collection, Manegg turns to animals for elucidation. We’re given yokes and eggs representing traditions of hetero-normative expectations layered with compulsive reproduction in animal husbandry. “Let me say in-law, in-law/ I won’t lay an eggy egg” (from “1 Say No Lame!”) and “Save and grin, wee and we, Hen revolts and bets on awe” (from “3 None Say None”). With syntax like “I solely laid beyond nit for jerk” we’re prompted to understand across hybridization, while confronting the constant trouble of doubting because the language is ‘foreign’, which is to say not familiar, which is to say difficult, which is to say worth it. But if we are left with any question of what, exactly, is being refused and why, we may have a response in one of the last sections, Diary of a Translator:

Long time ago, the moon laid an egg, which became an occupied egg, war egg, then a neo-occupied egg. The moon’s egg was a doubled egg. Egg and egg, a divided egg. History and memory fed egg. Not a hollow egg. Not a nation’s egg. Egg did talk egg talk! Egg did. Egg off! Empire must go!

The poems track many objects across and through sections—eggs, forests, bridges, the OED—until it begins to feel like these objects are being picked up and handled and carried to another room where we find them later. There is no space, however, in these rooms of rape and colonization for a vatic tone. The demotic tongue is as lofty as the speech will get. Even in the section From Noon—to All Surviving Butterflies, which draws on a book of Dickinson’s fragments and employs her use of the dash, we encounter earned irony and exasperation:

Master’s language is forever thoughtful about what happened before something. Happy language! Shame is attached to syntax. Seal it or numb it. Most terrible pain you can imagine. Ask OED! In my house, the shoed are put to sleep and the shoeless forever depart. Going to dooms of napalm! Going to Guantánamo.

It is this tone that specifically resists helplessness, and to consort with animals and etymology suggests power outside of a reign of terror. The speaker has been “In the forest since 1981” articulating a space that must be lived in, especially if comfortable inhabitation is impossible, especially if inhabitation provokes the sentiment “My forest, my ass.” The power of this collection, after the myriad problems are traced (Empire, Empire, Empire) resides in its multiplicity. The various forms throughout the different sections are woven with many disparate sources, including books regarding South Korea/ U.S. relations, and quotes from Spivak, Deleuze and Guattari, Fanon, Dickinson and Freud. The author herself slides skillfully out of one guise and into another. This variation presents an oblique solution to the problem of Empire as the one. Its welcome antithesis is here in shape-shifting multiples.


---
Don Mee Choi was born in South Korea and came to the U.S. via Hong Kong. Her first book of poems, The Morning News Is Exciting, will be published by Action Books this April. She lives in Seattle and translates contemporary Korean women’s poetry; her translation titles include When the Plug Gets Unplugged (Tinfish, 2005), Anxiety of Words: Contemporary Poetry by Korean Women (Zephyr, 2006), and _Mommy Must Be a Fountain of Feathers (Action Books, 2008). _
---
Caitie Moore has served as the poetry editor of CutBank and as the managing editor of Slope. Her poems can be found online at Strange Machine and Inknode and in print in Muthafucka and forthcoming in Handsome. She lives and works in New York City
Posted by CutBank at 10:48 AM