Slaves to do These Things, Amy King 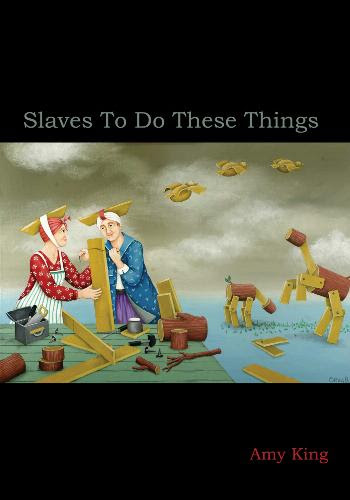 Moving deftly between registers of the fabulous and the mundane, Amy King’s Slaves To Do These Things articulates a language of resistance and becoming, this transformation figured through the re-configured body: “I thrum between / postures I heal from / and postures you pose in.” Opening with Baudelaire’s description of beauty as “a dream of stone…mute and noble as matter itself” juxtaposed against the dilemma of the embodied soul, being in the world – “I came out twice / sobered and married, / then aimless and pregnant,” King sets her new collection amid the daily rites of Brooklyn —cool weather, poets walking its sidewalks, friends gathering over wine and a meal — even as she warns us, “I am the final / seminary soul to / check your shape / in the dress of that embalming line.” Against the “neglect of a virginal / mother,” a church whose “fear of eternal flames…render[s] the spirit deaf”, she offers an alternative schema of sacred/spirit/body: “this space is blank, though / not intentionally so. It is so / because you are not yet in it.” King describes a dream about-to-manifest amid the catastrophe of political and economic collapse: “we play life / until delivered…everywhere terrorists, suicide failures, half-rolled against the fence of a homeless drifter.” Taking us on a “vision quest” at the Hudson’s edge, she speaks at “a door which opens…to no knock.” Chronicle of the coming of age – or vision – of a poet, the five “acts” of this collection meditate on gender, identity, and nation, “slaves / we made but no / longer cohabit with.”

A simultaneous awakening into poetry and politics, the speaker of these poems wrestles, in angry love poems, with an America of “snake oil’s morning” which she “want[s] to rescue from this toy chest /…[but] won’t use [her] only gusto.” The poet’s dream-formed Brooklyn becomes the scene of encounter with the lost self/Other, in which the divine functions as the site of threat rather than redemption – Claude Cahun’s epigram to “Act III” a confirmation, “Selling one’s soul to God : is to betray the Other.” Rejecting “the tear-soaked armpit / we call God’s love” as “a sideways path / that keeps us safe and criminal,” King’s speaker sends forth from Brooklyn, “me, / lost weed, skulled tulip, with scalloped eye. / A view to escape within.” Of the longing for redemption, only the fear of it “beautiful,” King reminds us that “To believe / a scarecrow’s resurrection, // you must, at first, behold the thing / alive.” Hope, redemption, divine intervention figure as “disease”, perils leaving us begging from “Doctor Starch” and his endless catalog of absurd prescriptions:

Turning elseward, King’s speaker “let[s] [her] body grow down / among weeds of singing children”, her mind “portable….[traveling] / the verse and valleys of whole people”, baking them into “shapes and a spoon- / shaped cake to taste the world with.” She leads us with her, outward into other worlds, the ones we’ve overlooked or “never stepped into” because in America “We hold on to the value / of a vote, a soliloquy, a sword.” Even so, we’re no closer to the sought-after redemption, “the lights after the curtain”— we’re still “hoping for a kinder, gentler world.” Riding along with King, we’re the “audience not quite tied / to the running board / of a hazmat jalopy,” “this sprayed-on dream…of supply & demand.” The “God” we’ve been waiting for? She’s re-gendered, “her mocha acetate / A-line” belying “her swollen version/ of [our] abdomen”, pregnant and promising what? Re-embodied she’s growing a “second fetal skin”, “an intimate book” we’re reading, our “forever / project of waking up.”

A bardic vision of the poet, seized from the midst of quotidian Brooklyn, like Whitman before her, reborn tracking the "American" catastrophe, envisioning another birth/re-birth -- a new 'earth'/body/dream born of the "etched-over dream": "we swell and precede / lit to the age of the coming America." A collection in five "acts", both re-creation and performance in which we are the actors, "looking down the hill," tumbling on "the pen's own angle." These poems, "prodigious...as the green pearl in silt," flash in and out of vision's surreal space, into and against love, out of masks, and into the open of the American dream, the American city: "Brooklyn...busy in / its torments, its gashes, its faint array / of willing and rebellious tenants." In "our love", "this art", “the child”, the possibilities of redemption are translated as body, a stage upon which the self performs and re-performs its own becoming: “This crawl space narrows / as the child emerges, // Ever more fractal, / ever more motion.” Slaves, stuck in “the soup of stupidity [passed] off as love’s castigations,” we stand, vertiginous, at the cusp of liberation—“a literal exchange / we reach across.” 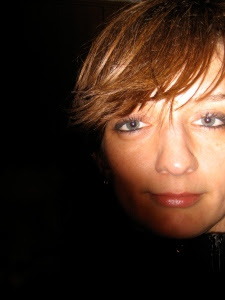 Amy King is the author of I’m the Man Who Loves You and Antidotes for an Alibi, both from Blazevox Books, The People Instruments (Pavement Saw Press), Kiss Me With the Mouth of Your Country (Dusie Press), and most recently, Slaves to Do These Things (Blazevox). Forthcoming is I Want to Make You Safe (Litmus Press).

Amy organizes “The Count” and interviews for VIDA: Woman in Literary Arts, edits the Poetics List, sponsored by The Electronic Poetry Center (SUNY-Buffalo/University of Pennsylvania), moderates the Women’s Poetry Listserv (WOMPO) and the Goodreads Poetry! Group, and teaches English and Creative Writing at SUNY Nassau Community College. Her poems have been nominated for several Pushcart Prizes, and she has been the recipient of a MacArthur Scholarship for Poetry. Amy King was also the 2007 Poet Laureate of the Blogosphere.

Marthe Reed has reviews in New Pages and at Dialogue's End; another is forthcoming from Ekleksographia. She has published two books, Gaze (Black Radish Books) and Tender Box, A Wunderkammer with drawings by Rikki Ducornet (Lavender Ink), as well as two chapbooks, (em)bodied bliss and zaum alliterations, both part of the Dusie Kollektiv Series. Her poetry has appeared in New American Writing, Golden Handcuffs Review, New Orleans Review, HOW2, MiPoesias, Big Bridge, Moria, Fairy Tale Review, and Exquisite Corpse, among others, and is forthcoming from Ekleksographia, Eoagh, and The Offending Adam.
Posted by CutBank at 12:07 PM