The Sore Throat and Other Poems by Aaron Kunin 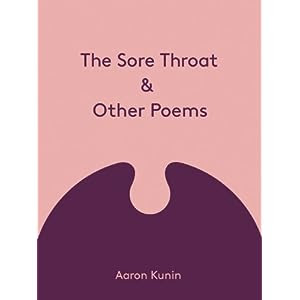 Of shame to be other than6

The Sore Throat wheezes most consistently with the pleasure of textual desperation, a gymnastics of the imprisoned
tongue, presenting a confined space tinged with the hot breath of a damaged throat (the core of which is an unrelenting
mundanity; not diseased, not flayed, but erupting from a common, vaguely unpleasant infection, a minor malady, a
sickness unto dearth). This book is a delight in the way that watching a drunken, curbside woman weeping into her
handbag is a delight. It is a recess suddenly revealed, a raw complex of simple inabilities. It should not be a delight,
but it is—the pathos is almost insulting in that it cuts both ear and tongue, speaker and receiver. The result is deep
intimation between the slightly wounded.

What we have is a lack attended by a lot of questions. Buy this book, but buy it with something other than money.
Currency, like articulated desire, is empty gesture: it supposedly holds weight in other realms of experience, but in
Kunin’s shame-based economy, the money, in any amount, is never enough to offer the individual the security it
desires. God is no less a gesture, nor is love. Thought is perhaps the most interrogated realm, the most able to be
communicated and therefore the most able to fail under these heightened expectations. Distinction between mind,
thought, or body is an unnecessary contortion. Not even nothing is unauthorized.

Kunin situates the first section of the text as a (revised) translation of Ezra Pound’s “Hugh Selwyn Mauberley”. This
textual situation, of initiating translation within a language (implying that the gulf between poets, especially poets of
distinct generations, is as wide as the gulf between different languages), is considerable. The concentration of potential
renditions into a “severely limited vocabulary” is one way to approach a severely widespread epidemic of shame in a
culture dedicated to openness, one that hides shame behind the façade of rights regarding various forms of protected
speech. Speech, when it fails, essentially needs protection, but this protection is what keeps it from escaping mediation.
Speaking commonly, each individual’s vocabulary is generally limited in much the same way as Kunin’s formal
process, an insight that drains language of the stable bridges that it conjures in its most rudimentary bindings. The
notion of the revised translation (many of the poems of The Sore Throat’s first section appeared as early as 2004 in an
online-only release entitled “The Mauberley Series” through UbuWeb) also implies that translation is conceived of as
realistically more a process than a product, more a paroxysm than a pantomime.

This is a very different book from Kunin’s earlier work, Folding Ruler Star, in
which poems were syllabilistically
incised, throttled and restrained from venturing beyond a codified length of expression. The Sore Throat, instead,
crawls exhaustedly into an ever-opening horizon of unsettingly simple diction, into forms that ensnare contradiction, let
it flail and later release it to the soft lap of whitespace; the most bland of landscapes is the most frightening.

Pervasive entanglements, finally resulting in a parody of the self. The preface to this work ("Note on Method")
inspires a blurred narrative presence: Kunin, in this work and in other interviews, openly writes/speaks about the
experience of notating the external world’s language-din through the physical tic of his “binary hand-alphabet”.
However, this is not a simple notation, the hand acting as a dictaphone, but a creative gray-space in which the operative
device of the writer receives, generates and assembles experience. In other words, the alphabet turns in upon itself,
recording the individual twitch of the hand that records the outer world. Snatches of conversation become snatches of
the self; din becomes him, multiplied. The experience of the world and the experience of the hand experiencing the
world is a process invoking translation, a space where language meets gap and bridge and yet, must fall.

Or, this should read “Writing unsuccessfully about successful writing about the failure of talk between ourselves.”
Kunin’s work discriminates the voice above all other noise; poems are wrenched, simply, from a throat garotted by
its own instability. But the book is finally more than this, its parts. It is a stable nation of formal divergence, machines
making brittle music to glitch to, a hand confidently failing to denote the entire quiver of the throat-string, a voice
falling upon other voices to insinuate a pile of imploded harmonics, and tables of whitespace indicating an ordering of
absences. If a thing is worth reading, The Sore Throat and other poems is worth reading.

Aaron Kunin grew up in Minneapolis, was educated at Brown, Johns Hopkins, and Duke. His work has appeared in Boston Review, Fence, The Germ, No: A Journal of The Arts, The Poetry Project Newsletter, The Poker, and elsewhere.

---
G.R.O.A.N. is a collaborative-action imprint currently based in the
Netherlands. They can be contacted at: groanpoetics@gmail.com.
Posted by CutBank at 9:54 AM