If Not Metamorphic by Brenda Iijima 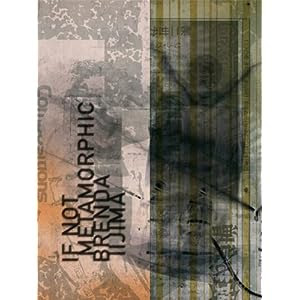 In the collection of essays she recently edited )((eco(lang)(uage(reader)), Brenda Iijima writes, “Poetry can actively engage blind spots – where conditioning, denaturalization, and denial for instance, have buttressed the status quo, politically, socially, spiritually, and environmentally, leading to a degrading ecosystem that places terrestrial wellbeing, everyone’s wellbeing, all living organisms, oceans, forests, etc., in jeopardy.” In her new collection of poetry If Not Metamorphic, Iijima addresses our ecological predicament by using language “as a means to create and articulate alternative strategies for living.” Both )((eco(lang)(uage(reader)) and If Not Metamorphic were published this year, and seem to be companion pieces. If Not Metamorphic represents the actualization of the philosophical and linguistic imperatives put forth in her essay in )((eco(lang)(uage(reader)), and largely succeeds in articulating an alternative strategy for living that is jarring, terrifying and somewhat sublime.

The state of ecopoetics as presented in )((eco(lang)(uage(reader)) is one that is complicated by a troubled relationship with the ‘I’. In her essay “Eco-Noise and the Flux of Lux” contained in )((eco(lang)(uage(reader)), Evelyn Reilly captures the concerns of the ecologically aware as being “a matter of finding formal strategies that effect a larger paradigm shift and that actually participate in the task of abolishing the aesthetic use of nature as mirror for human narcissism.” I believe Iijima would agree. In “Tertium Organum,” the third of four poems in If Not Metamorphic, Iijima writes, “I has been extricated from / gesture, endures as a symptom,” but of what? Of language? Of the human projection of self onto nature through language? In Nature, Emerson asks, “have mountains, and waves, and skies, no significance but what we consciously give them when we employ them as emblems of our thoughts?” This is an issue Iijima addresses in “Tertium Organum” with a “message of self-erasure / read theoretically.” If Not Metamorphic is an attempt to erase the self through the violence inherent in language, through the violence language inflicts upon that which it describes.

Language assigns, conditions and codifies. The brain can only narrow its “winnowing screed,” as Iijima writes in “Tertium Organum.” Throughout If Not Metamorphic are signposts of contemporary life; each page contains several words that refer, redirect and re-contextualize the images, ideas, feelings that contain them. The phrase “composted lexicon” appears near the close of the magnificent poem “Time Unions” and one cannot help but apply the purpose and performance of a compost pile to the language of If Not Metamorphic itself. Language that has been left to decompose and develop bacteria is now being used in different ways, for different purposes. Words and phrases that have no cultural reference have been broken down with those signposts of contemporary life to create the “skeletal nomenclature,” as she writes in “Tertium Organum,” of a whole new entity. Cultural signposts such as “industry,” “tear gas,” and “sanctions” are complicated by context, and tempered by tone. Iijima removes a historical legend from the compost pile as “don’t tread on (me) / do not” and doubles-down on her self-erasure. At the end of the poem, she writes a litany of pictures, of differing images:

Just as mountains are emblems of thought for Emerson, for Iijima pictures are what we make images and objects into with a kind of violation. She tries to break the system down by resisting language, letting language resist itself. When she writes, “it’d felt as if I answered” it is a lost-for-words moment in an attempt to lose one’s words, one’s language and self. Losing one’s words is what we may need to embrace what we violate by describing, equating and aligning with the cultural detritus we use those same words to discuss. Losing one’s words is what may be needed to let mountains be mountains.

And yet Iijima allows her poems to have moments of awe and discovery. Often the discovery is what language has turned itself into, but there is a passage in “Tertium Organum” that nears the sublime:

Even though the “I” appears, this is a moment that is not marred or denigrated by the “I” and its actions, by the referentiality or intentionality of language. Shoveling deeper into the earth is an act of connection that renders the “I” irrelevant. If Not Metamorphic is full of these moments – perhaps not as explicit, perhaps only theoretically – moments that do not so much solve the problems of “I” in an “I”-consumed world, as reroute the mind around the “I.” If Not Metamorphic attempts to tread new pathways between sign and signified, between “I” and nature, in such a way that composts those descriptors, those categories of a violent mind into something new, something useful.

Brenda Iijima is from North Adams, Massachusetts and studied at Skidmore College. In addition to writing, Iijima also paints, runs Portable Press, and teaches poetry at Cooper Union. Other recent works include a collection of essays edited by Iijima, )((eco(lang)(uage(reader)), and a collection of poetry, Revv. You'll--ution.

Christopher Kondrich is a PhD candidate at the University of Denver. Selections from his book-length poem Canto Fermo have or will appear in Boston Review, Free Verse, Meridian, Notre Dame Review and The Journal.